The Alliance of Motion Picture and Television Producers published a White Paper with safety guidelines for motion picture, television, and streaming productions during the Covid-19 pandemic. 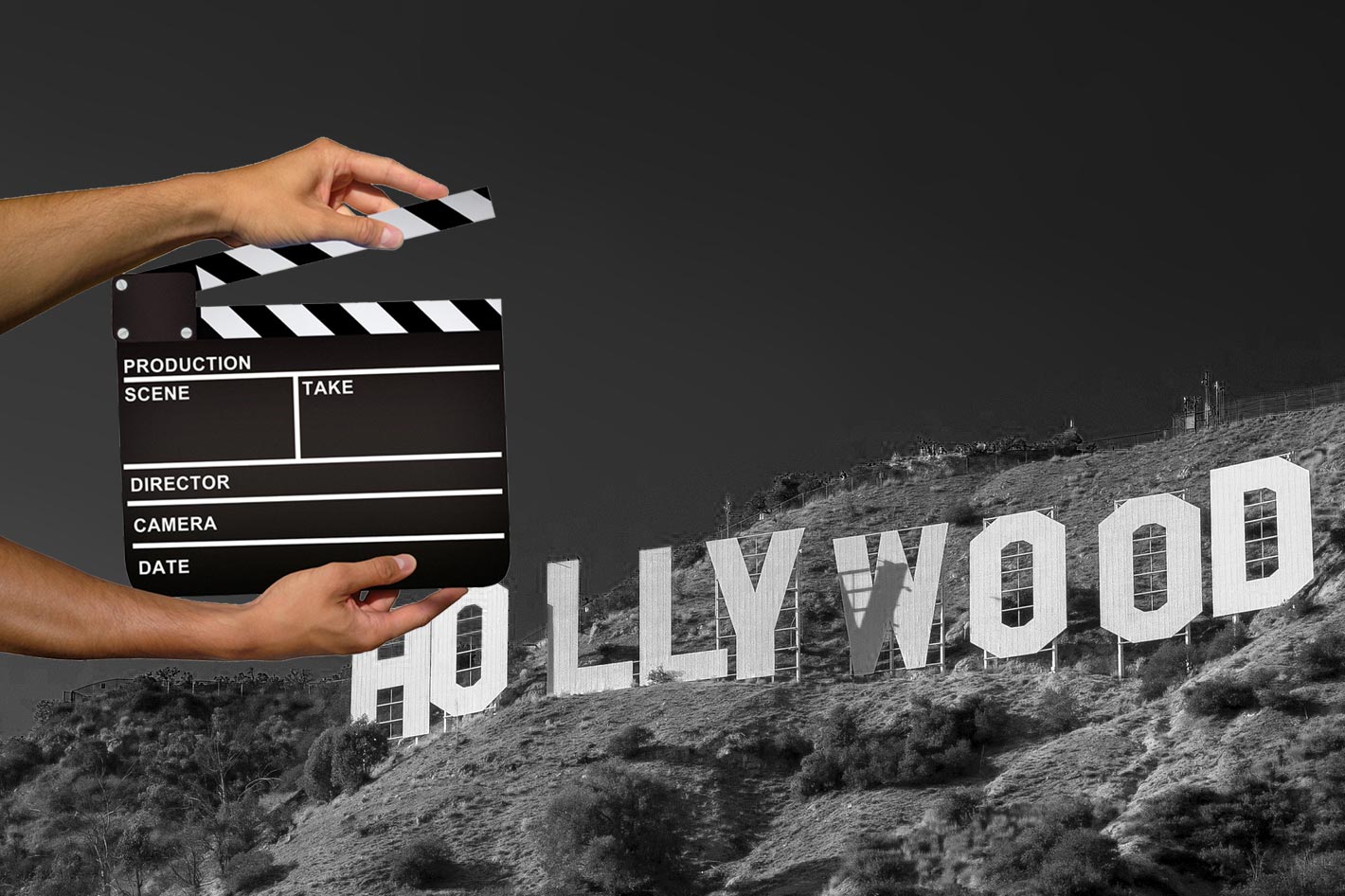 Hollywood is no stranger to pandemics, since 1914, but this one hit it hard and for real. As the industry gets ready to return to work, a 22-page white paper documents the health recommendations to follow.

Sent to California and New York Governors last week, the 22-page white paper from the Alliance of Motion Picture and Television Producers is an evolving guideline for the industry to get back to work, starting on June 12. The document, which offers safety guidelines for motion picture, television, and streaming productions during the Covid-19 pandemic, was created by an Industry-Wide Labor-Management Safety Committee Task Force, at the request of and in collaboration with the various unions of the motion picture and television industry and the Alliance of Motion Picture and Television Producers, which collectively exercised final control over their content, based on the input provided.

The Task Force consists of the International Alliance of Theatrical Stage Employees (IATSE) and its West Coast Studio Local Unions, as well as its New York Local Unions, the International Brotherhood of Teamsters as well as the Basic Crafts Unions, the Screen Actors Guild-American Federation of Television and Radio Artists, the Directors Guild of America as well as the Alliance of Motion Picture and Television Producers and other representatives of the producers. 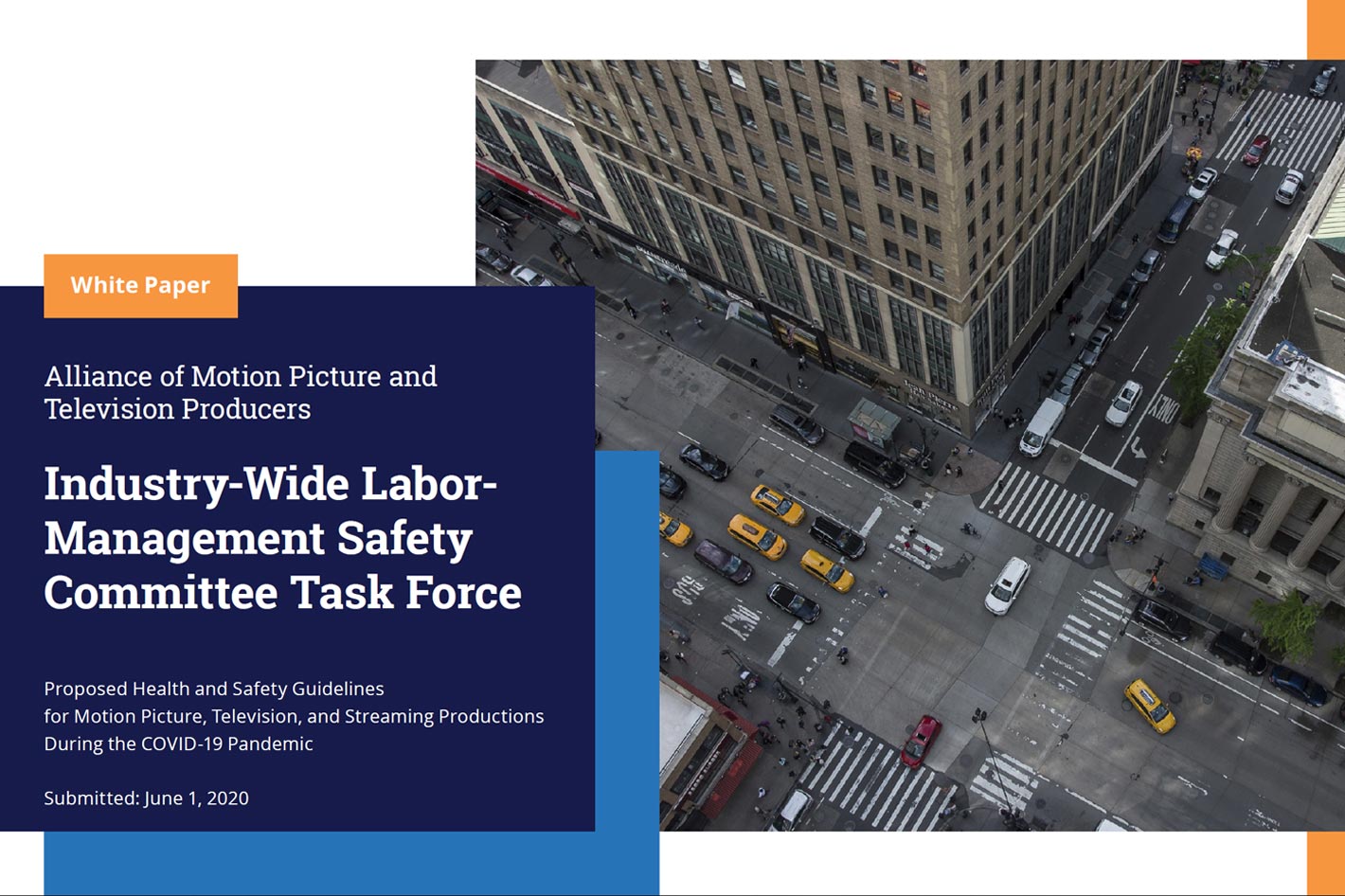 Hollywood goes back to work on June 12

The guidelines in the document, published by Deadline, are based on discussions with health experts, guidelines issued by U.S. Centers for Disease Control and Prevention (CDC) and the Occupational Safety and Health Administration (OSHA), and input from industry participants familiar with the working conditions of motion picture and television production. These guidelines, which are intended to address the circumstances under which production can safely resume, can be changed and adapted in the future, as the Task Force recognizes that COVID-19 is a new disease and many of the facts surrounding the pandemic are still being determined. A note at the start of the document states that “as circumstances change, and public health officials issue new guidance, the protocols under which production occurs may be adjusted accordingly.”

A statement from the California Department of Public Health via the Governor’s Office, last Friday, noted that “Music, TV and film production may resume in California, recommended no sooner than June 12, 2020, and subject to approval by county public health officers within the jurisdictions of operations following their review of local epidemiological data including cases per 100,000 population, rate of test positivity, and local preparedness to support a health care surge, vulnerable populations, contact tracing and testing”, giving green light for the industry to resume work. 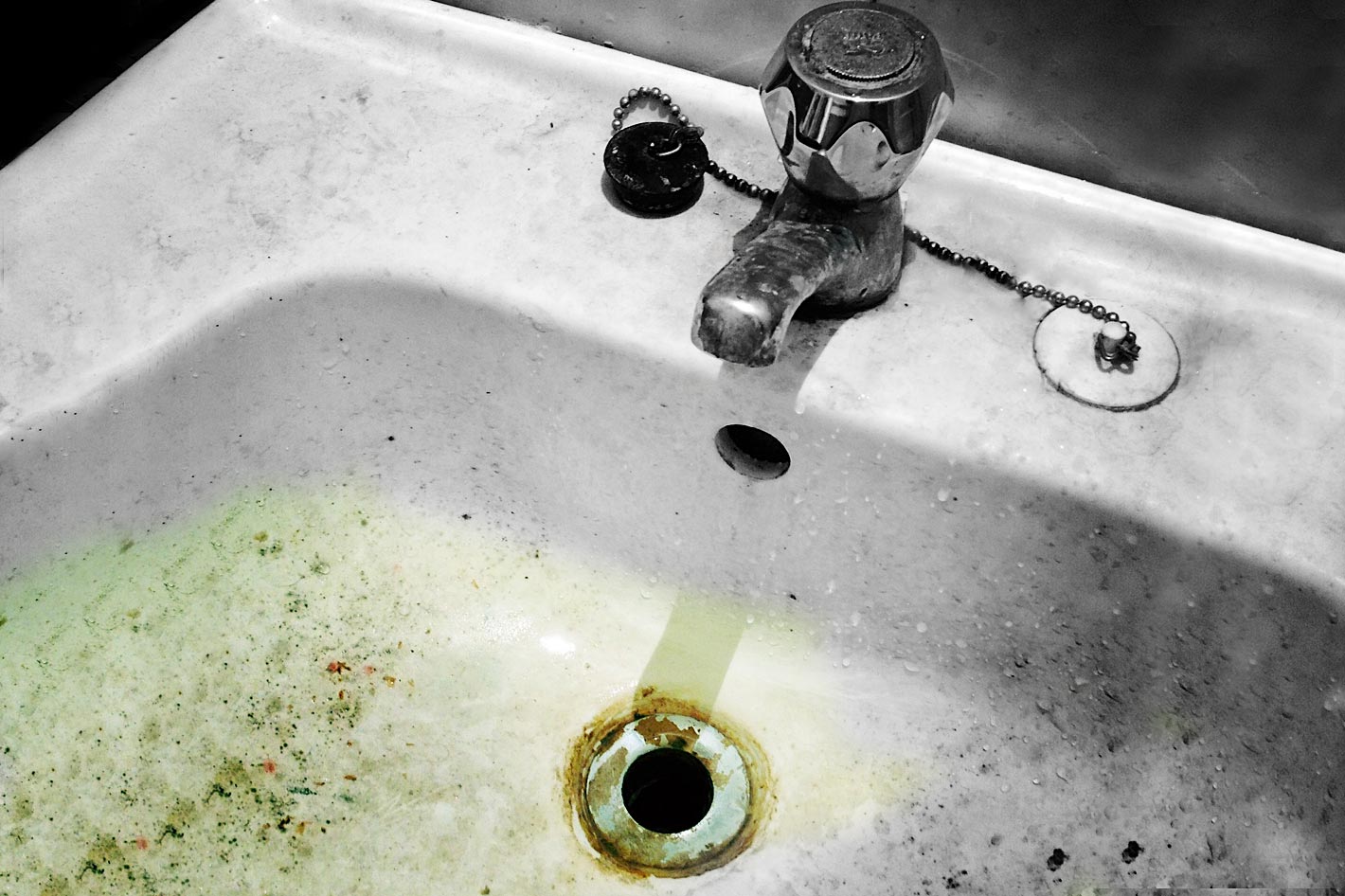 Hollywood: the reality behind the curtains

Hollywood may be going back to work, but it’s a whole new Hollywood, with new guidelines and drastic changes required to guarantee the safety of crews and everyone involved. One article published in the Los Angeles Times, “Staggered call times. No more buffet-style food. How sets might change after coronavirus” reveals that “the coronavirus has cast a spotlight on a lack of hygiene on sets, with some people recalling situations where there were not enough bathrooms or places to wash their hands.”

Hollywood productions give the public, many times, an image of gold and glitter, but behind the curtains reality is very different. The recent pandemic will force productions to rethink conditions for all the participants, from cast to crews and visitors. In fact, the Covid-19 is responsible for a whole new category of job on set: the white paper states that “one or more autonomous COVID-19 Compliance Officer(s) with specialized training, responsibility and authority for COVID-19 safety compliance and enforcement will be in the workplace to address issues as they arise.” 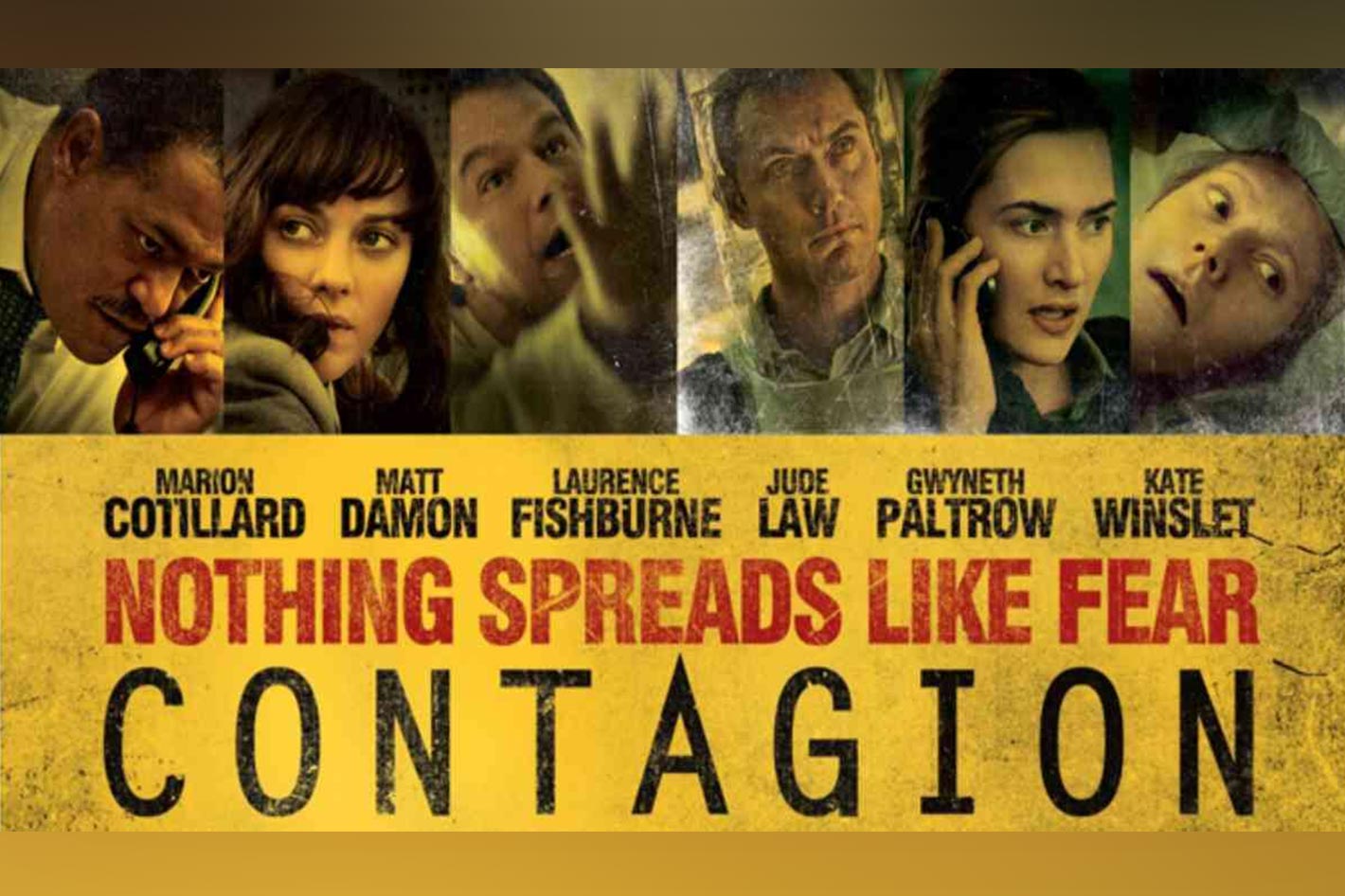 Hollywood and epidemics: a story starting 1914

Some of Hollywood’s blockbusters have epidemics as their subject, from Steven Soderbergh’s “Contagion” to  “I am a Legend” from Francis Lawrence. In fact, Hollywood’s passion for the theme can be traced as far back as 1914. The difference now, and that’s somehow ironic, is that the masks are being worn on the other side of the camera too, in this new reality faced by Hollywood.

The Journal of the American Medical Association published, recently, in its JAMA Network one article by Walter N. Dehority, a pediatric infectious disease specialist in Albuquerque, New Mexico, under the title “Infectious Disease Outbreaks, Pandemics, and Hollywood—Hope and Fear Across a Century of Cinema” which reveals the appearance of infectious disease outbreaks in cinema since 1914, and identifies common themes, such as stigmatization and physician heroism, that characterize the films.

The article is based on a search of IMDb.com (Internet Movie Database, an online database of film and TV information) conducted in February and March 2020 “to update a 2017 search using 163 infection-related search terms to identify films with a major focus on infectious diseases (as assessed by review of plot synopses on IMDb, the American Film Institute database, or Wikipedia) through December 31, 2019.”

According to the article, a total of 373 films released in US theaters deal with the subject. Of these, “142 (38.1%) featured a human infectious disease outbreak (increase in expected cases of an infectious disease in a population) or pandemic (outbreak over multiple countries or continents), as defined by the Centers for Disease Control and Prevention, with the outbreak/pandemic (or the threat or aftermath of one) as an important component of the story. 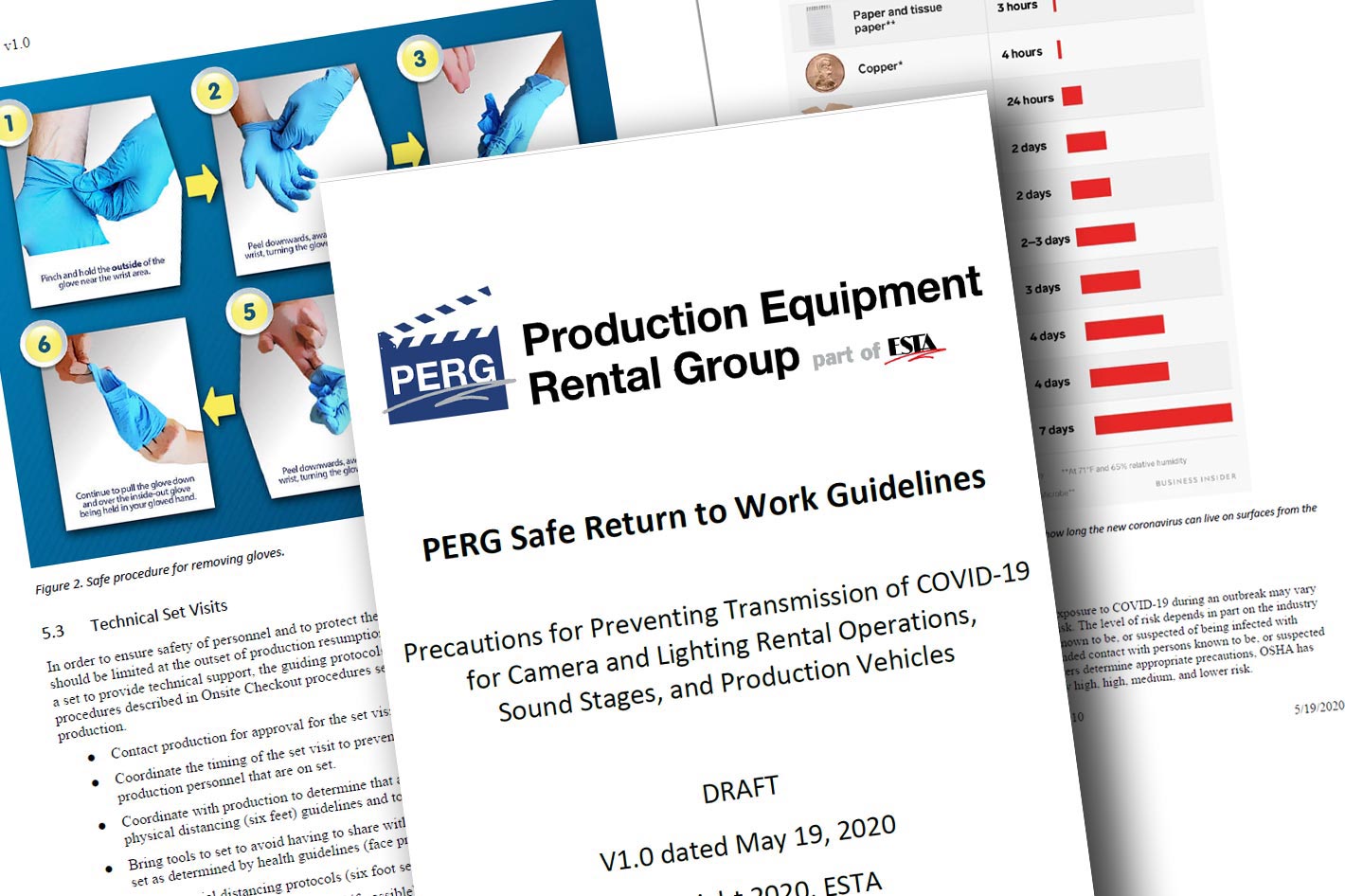 The article published by JAMA Network is an interesting take that confirms Hollywood’s passion for the theme. As the author notes on his article helping to better characterize this phenomenon, “movies are a shared cultural experience that have historically depicted infectious disease outbreaks and pandemics and reflected accompanying hopes, fears, and at times, uncomfortable realism about contagion.”

Now, contagion is a reality for the industry workers, as for everybody else. Life has changed in recent months, as ProVideo Coalition documented in “COVID-19: entertainment workers should not be colateral damage, says IATSE”, which dealt with the efforts from the presidents of both IATSE and MPTF aim to help the entertainment industry professionals survive through what is one of the worst crisis of an industry whose workers can not work from home.

Last May the Production Equipment Rental Group – PERG – released a document with recommendations for the prevention of the spread of COVID-19 19 for camera and lighting equipment rental operations. The PERG Safe Return to Work Guidelines document is available to download from ESTA. The organization encourages members to share the link with others, rather than the .pdf itself, to ensure people receive the most up-to-date version and to help ESTA to track use of the document. Because new developments are inevitable, the guidelines will be a living document. The Task Group will update the document as new information becomes available. 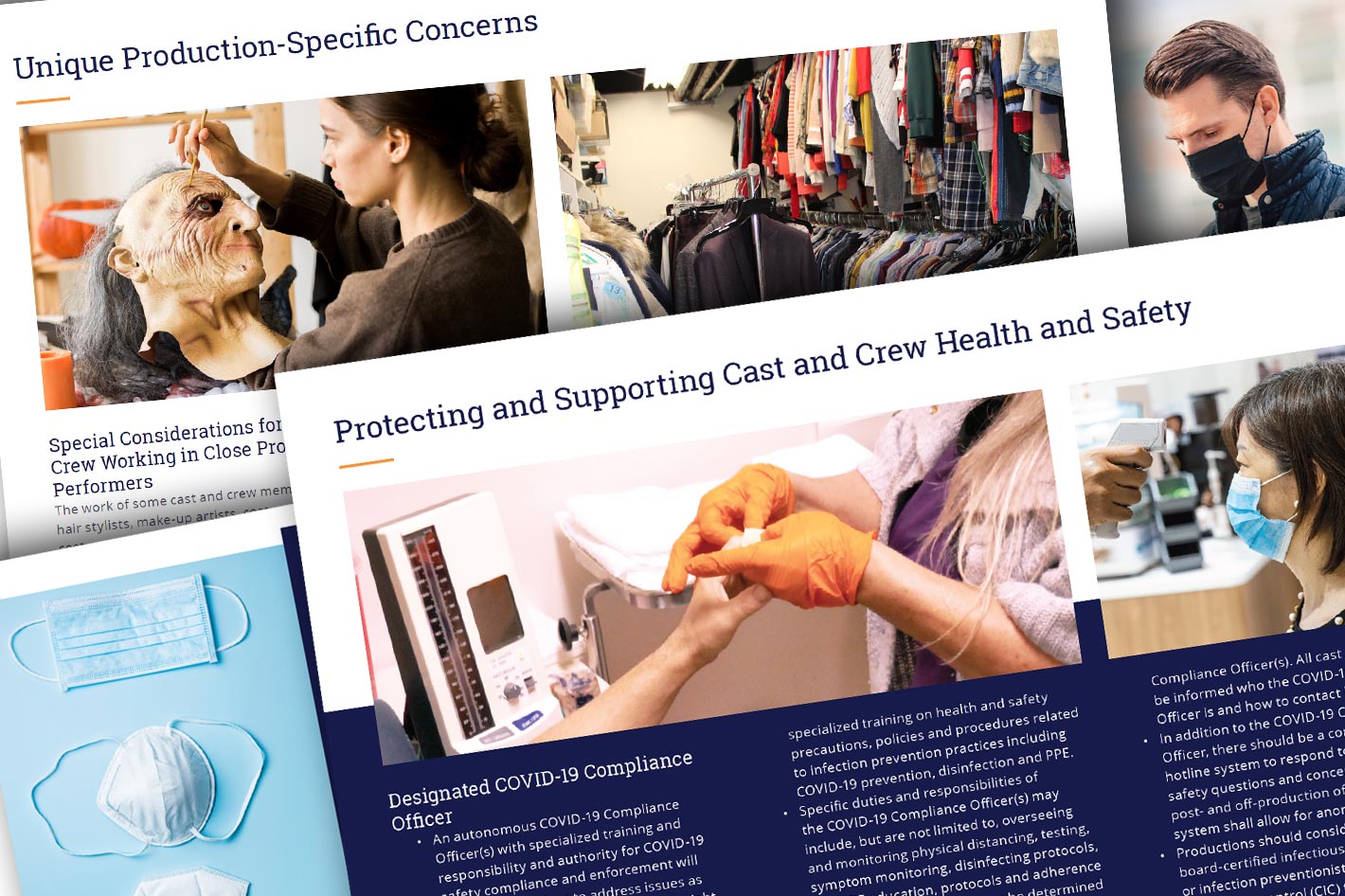 Industry goes back to work, with CGI actors on the horizon

Also in May, IATSE announced they had hired a team of three epidemiologists to consult the union on best practices for workers in the entertainment industry to safely return to work. IATSE International President Matthew D. Loeb said, “We want everyone to get back to work as soon as possible, but we need to do it right. We are working with these epidemiologists and employers to create standards that will apply across the board in the US and Canada, so no production or worker is left behind.”

Matthew D. Loeb noted that “much of the live event industry is dependent on drawing crowds of people for revenue” but also important is what happens behind the scenes with many workers, like those in Hair and Make-up and Wardrobe departments, who must work in extremely close proximity to others to do their jobs. “Creative jobs will require creative measures to come back safely,” said Loeb. “These professionals will help us uncover what those measures should be.”

The Times They Are A-Changin  sang Bob Dylan, and they surely are in Hollywood, where no one knows, exactly, how the whole world of make-believe will be affected. With physical distancing being required, it will not be possible to shoot many scenes that are considered the hallmark of Hollywood movies – at least for now. The use of CGI actors is expanding and new technologies may, according to some, dictate that background actors, for example, may leave the scene, meaning the solution for one crisis brings a long time problem to thousands of extras: unemployment. But no one knows, really, what the future will bring us. 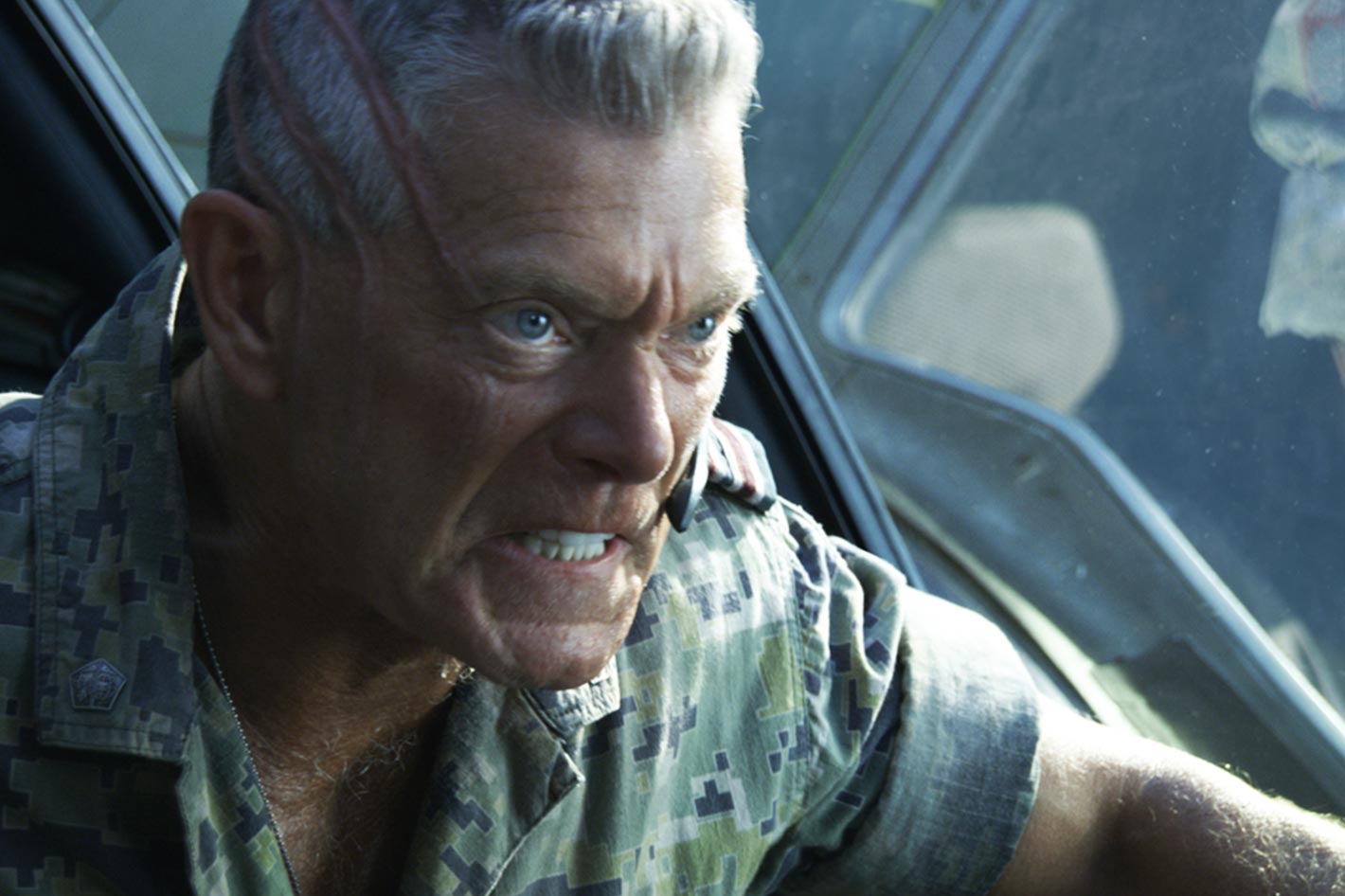 We’ve seen it coming, and Covid-19 may simply hasten the process: dead and magically “de-aged” actors are appearing more frequently on movie screens, so don’t be surprised if some of the most intimate scenes in future films will be created in computers, with avatars of the real actors. This is not even new: in James Cameron’s Avatar, a scene showing actor Stephen Lang inside a 16-foot mechanized skeleton – the Amp Suit – is a mix of motion capture of the actor with a computer created avatar.

The digital double for Avatar was created by scientist and CGI wizard Paul Debevec, who adds one important note: “every good performance by a digital actor has been good because there was a real performance by a real human actor who has created that character … and it has been used to faithfully drive the digital character.” Although technology has evolved since the first Avatar film was released, the truth is technology is far from perfect, as the recent movie The Irishman showed, so actors will continue to be key to the success of a story. Because, in the end, acting is more than just moving the body to create perfect animated pixels! 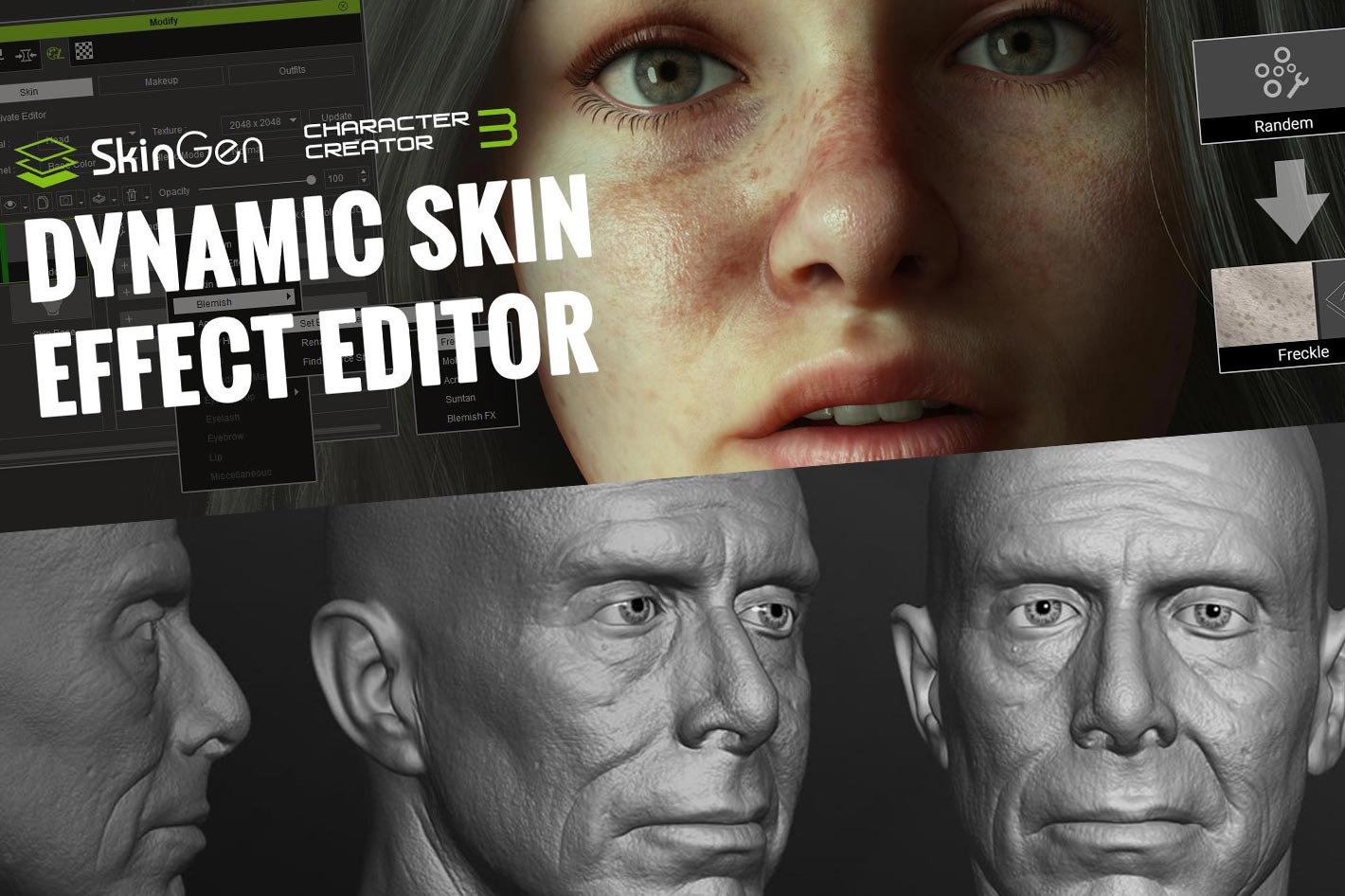 Still, it’s good to see technology evolving and being put to good use in Hollywood. From the Virtual Production of The Lion King, to many of the scenes in the most recent blockbusters, the digital world is helping Hollywood to tell stories in ways it was not possible before.  There is no doubt that tools as the just announced SkinGen, a new plugin for Character Creator and the next key component of the Reallusion digital human creation system, will contribute to create digital actors.

As noted in “First Look: Reallusion reveals SkinGen for digital humans creation”, our coverage of the new tool, “with the pandemic reshaping the way productions are made, the need for avatars and virtual characters will grow, as some scenes will be created in computer, reducing the need for physical contact between actors. We’re, in fact, entering a new phase in movie production, one in which the tools developed and perfected in recent years will become invaluable.”

Does this mean that some Hollywood jobs will be lost forever? No one really knows. But one thing is sure: Hollywood is going back to work, and do not doubt it, the making-believe world will use all the tools it can to keep the dream alive, and keep telling stories, because telling stories is central to human existence. And you’ll need human actors, crews and other creatives to make those stories happen…