ederal Communications Commission Chairman Julius Genachowski will participate in a question-and-answer session at the 2013 NAB Show in Las Vegas, the National Association of Broadcasters (NAB) announced today. Genachowski will sit down for a conversation with NAB Joint Board Chair Paul Karpowicz, president of Meredith Corporation – Local Media Group, on Wednesday, April 10 at 9 a.m. in Las Vegas. 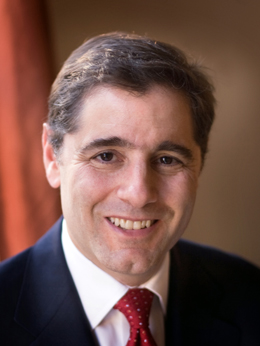 “NAB looks forward to hosting Chairman Genachowski at the NAB Show once again to hear his views on current and future communications issues before the Commission,” said NAB President and CEO Gordon Smith. “This session is sure to be informative for radio and TV broadcasters and an excellent opportunity to learn about the regulatory issues shaping our industry.”

Genachowski was sworn in as FCC chairman in June 2009 after spending more than ten years in the private sector as an executive and entrepreneur in the technology industry. He co-founded LaunchBox Digital and Rock Creek Ventures, where he served as managing director, and he was a special advisor at General Atlantic. From 1997-2005, Genachowski was a senior executive at IAC/InterActiveCorp, where his positions included chief of business operations and general counsel.

Previously, Genachowski worked at the FCC in the 1990s, where he served as chief counsel to FCC Chairman Reed Hundt and as special counsel to then-FCC General Counsel William Kennard, who was later named FCC Chairman. He was also a law clerk at the U.S. Court of Appeals for the D.C. Circuit and for Justices William Brennan and David Souter at the U.S. Supreme Court.

He holds a B.A. in History from Columbia University and a J.D. from Harvard Law School.

About NAB Show
NAB Show, held April 6-11 in Las Vegas, is the world's largest electronic media show covering filmed entertainment and the development, management and delivery of content across all mediums. With more than 90,000 attendees from 151 countries and 1,600+ exhibitors, NAB Show is the ultimate marketplace for digital media and entertainment. From creation to consumption, across multiple platforms and countless nationalities, NAB Show is home to the solutions that transcend traditional broadcasting and embrace content delivery to new screens in new ways. Complete details are available at www.nabshow.com.