New Wave Entertainment (NWE) in Burbank, CA is an entertainment marketing company specializing in post-production and finishing services for broadcast, theatrical and social media advertising of film and TV programming. NWE has been busy with a rush of advertising on year end feature film releases and television programming. Recent campaigns include “Logan”, “All the Money in The World”, and “Murder on the Orient Express”.

NWE uses Fairlight exclusively for audio post and I spoke with their Chief Engineer and Senior Mixer Mark Rodrigues about its advantages. Due to the sheer volume of varying types of adverts required, the amount of work on these campaigns can be daunting but Fairlight offers unique workflows for their process as Mark explains…

“We do a lot of versioning, and for “Murder on The Orient Express” we delivered things from TV spots to…  short little clips that could be on Snapchat, Facebook, Instagram. Radio spots are included in all of that. We’re going to do a “day/date”, “Friday”, “tomorrow”, “now playing”, and then we do Canadian versions for all that, which is just minus the rating system that we use here in the US.”

“For every spot approved you are looking at 10 deliverables – one will be a six-channel split, a stereo pass, 4 stereo passes at minimum. Then the same thing for Canada.  With Fairlight, what makes it handy in delivering all these multiple files like that, we’re set up so that when I go ahead and start recording stems I can record every single one of those tags all in one pass. Then with a bit of head and tailing we can use a macro that will take all of those say ten spots and stitch them out into a file that will be a single multi-channel file that will have all of that laid out in six tracks, laid out across say a ten-minute timeframe. Every minute would be a new spot.”

Blackmagic Design (BMD) acquired Fairlight back in Sept 2016. BMD has bundled the software into their flagship finishing program DaVinci Resolve. This is a logical step for a company that has purchased, refined and continued development of many products, including DaVinci Resolve itself back in 2009. As is the case with new additions to a deep program, with beta releases, these transitions take time. BMD will also be adding new hardware in the near future to compliment the software. The release of DaVinci Resolve 14 was a massive upgrade to the software, including implementation of the Fairlight audio engine. 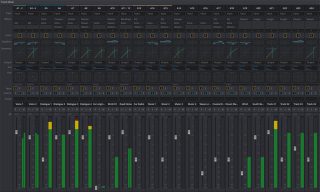 Fairlight in DaVinci Resolve can offer up to 1,000 tracks of varying audio track types. The current feature set includes up to six inserts per track and up to 24 sends per track. These tracks can include Fairlight’s advanced and proprietary processing tools such as compression/ limiting, expander/gates and 6-band parametric EQ. These are great sounding, wave shaping tools, honed with Fairlight’s long history in audio. It also offers a deep mixing environment allowing for complex routing, and can do many multi-channel formats right out of the box. It should go without saying that video figures prominently, offering tight sync between video streams and audio layouts.

Fairlight had a long history in audio prior to the BMD acquisition. In fact it’s been in use at NWE’s since their inception and their expertise in the Fairlight platform is deep. They currently have eight Fairlight bays in use around the clock at the facility. The NWE post workflow makes extensive use of the powerful macro capabilities inside Fairlight. Users have the ability to make intuitive, custom command sets that can perform any number of complex tasks with a single keystroke once created. Implementation of the extensive macro capabilities is still in beta within Resolve by BMD. Here Mark details his use with macros…

“It basically records your edit choices. Once you turn that macro on to record it, anything that you touch on the console is being recorded. So, when you are done and save it, and hit that button, it reproduces all of those commands. We have macro presets for .30s, or .60s or .90s. We also have macros for useful little things like – I can take my current edit and move it up one hour.” 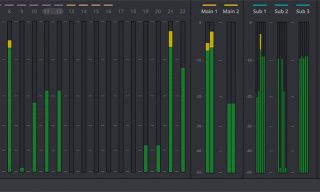 Complete implementation of Fairlight into Resolve will of course be a multi-step process. However, out of the box, the feature set is very impressive. Besides the built-in Fairlight processing tools, users will also be able to apply many of their favorite third-party plug-ins as VST inserts in their workflow. It also offers substantial metering, monitoring and processing including multi-channel fold-downs.

BMD has a habit and history of implementing these technologies and somehow reducing their overall cost in the process. Adding Fairlight to the tool set of DaVinci Resolve now makes it a contender in the DAW market. It looks like BMD is seeking to break the old paradigm of suites or interconnected applications and instead putting all of that in a single program.

Already an industry leader in color technology, with its picture editing capabilities steadily improving, and being embraced by filmmakers worldwide, now adding Fairlight audio to DaVinci Resolve makes hopping between processes as simple as a click on a tab. Many won’t miss the “round-tripping” program swaps to the prior workflows of other brand’s tool-sets. Add to that their dedication to the user experience, the betas and upgrades as the software evolves, making these tools incredibly affordable, in fact often free, BMD is working hard to make serious inroads in the NLE/DAW world.