Just add talent, a stolen location, natural light and a RED ONE camera

We scouted Alamo Square Park in San Francisco and found that it had every type of location we wanted or needed. Then we had to figure out how to steal it, as we had absolutely no money to spend on anything other than water for the crew.

Crew? What crew? It was Ian, myself, and Ted Allen, a film student I’ve been mentoring for a little over a year. A couple of other people stopped by to help periodically, but mostly it was just the three of us.

We decided to shoot on the RED ONE camera as we figured that would allow us to get away without using much, if any, additional lighting. The RED doesn’t have the most latitude in the world (it captures about nine usable stops from white to black) but it captures mid-tones in a way that feels very “filmic.” It often feels like it has more latitude than it really does because the mid-tones can be stretched a fair bit to give the impression that there’s more range there than there really is.

We wanted to be as fast and flexible as we could, so we picked out an old Angenieux HR 10-1 zoom: not the sharpest zoom in the world but it was small, very compact and gave us a great range of focal lengths from 25mm to 250mm.

Ian and I spent an hour or two the week before at the park, shooting stills and discussing angles, and we had just about everything nailed down before we started shooting. When we returned for the shoot, on a blustery day in early June, we knew exactly where everything was to happen. We had a limited window of time to get everything (from about 2pm to 7pm) so we resolved to work very efficiently.

It was fortunate that we didn’t plan on doing much lighting as the wind was so strong we had a hard time keeping the camera cart from blowing away. We used some fill in only one shot, of the woman sitting on the tree log uploading a photo, to pop her face enough that a gamma boost in post would bring her shadow exposure in line with the fully daylit background. A 3’x4′ piece of foam core covered in Reflectix was all that was needed, placed in a small pool of sunlight just out of the left of frame.

The shaky-cam approach was part of the gag: only a few years ago many VFX shots were locked off as tracking was time consuming, processor-intensive and expensive. These days it’s relatively simple to do that kind of work in After Effects, which is what Ian used to cut this piece. The combination of perfect tracking and the moving camera helped sell the illusion that the graphics were really there. 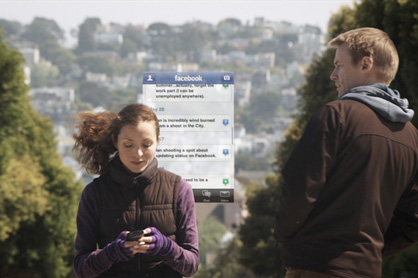 The hard part for me was framing for objects that weren’t there while preserving a documentary feel. While my intern Ted followed focus on most of the shots, there was one where I had Ian work the zoom manually while watching the assistant’s monitor, while I pulled focus by eye. I then framed the shot in response to his zoom moves as he reacted to the actors. It’s not very often that I get to tell a director, “Here, you work this and I’ll work this, and let’s see what happens!” It worked quite well and was great fun.

We were extremely fortunate that we were not bothered by police and other authorities stopping and asking us for our permit. Police cars passed us every ten to fifteen minutes, and when we spotted them we tried to act nonchalant and innocent. We went out of our way to keep the crew down to a small footprint, and I guess we were small enough that no one cared what we were doing… other than the two guys in the beat-up Datsun hatchback who parked in the background of one of our shots and wouldn’t stop waving and flashing their headlights. They eventually moved when we sent our largest and most imposing actor over for a chat.

I would be negligent if I didn’t mentioned that I used a set of Formatt Hot Mirror ND’s, in conjunction with a Schneider Optics polarizer, for this project. I bounced between an HM ND .60 and .90, depending on the quality of light. The fog crept in later in the afternoon and softened the contrast a bit, and in retrospect I like how the RED handled the higher contrast shots with full sun more than the softer, flatter shots.

I rated the camera at ISO 320 but never used a meter to calculate exposure. I went by a combination of the histogram, zebras, stop lights, and what I call the “barber pole” but is actually a “vertical bar graph raw sensor meter.” It tells you how “full” your bit buck is, and it only ever pays attention to raw–not gamma corrected–data. My modus operandi was always to expose as hot as I could: doing that meant Ian would have more options to adjust gamma upwards if he wanted to open up a shadow in post. (He did the color grade himself in After Effects, working directly with the native R3D files.)

The nice thing about using the RED for this kind of shooting is that you can’t futz. The outputs are so poor you can really only use them as a kind of video tap–but in a way that’s very freeing. You know that the image is always going to look better when you look at it on a real monitor later, so you just get on with shooting. At the beginning of the day I set the RED’s white balance to 5600 and locked it, and for the rest of the shoot we only touched the focus and aperture rings and the roll button. I did toggle into RAW mode once in a while to check a highlight for clipping, but other than that we just framed a shot, rehearsed, and rolled. When the controls are that simple it’s easy to shoot fast.

I wouldn’t do every shoot this way as sometimes you really have to know what you’re getting. On more critical shoots it’s helpful to pull the drive off the camera and take an occasional look in RedCine or RedAlert, just for peace of mind and due diligence. But once you know how the camera is reacting in a certain situation there’s no reason to stop and mess around with color or contrast.

Ian makes a cameo, by the way. In the second shot he’s the guy on frame left, wearing a hat, half-sitting on the bench and having a Hitchcock moment.

Thanks to my good friends at Chater Camera for providing a simple, inexpensive and incredibly efficient camera package for this shoot.

Art Adams is a DP who uses Facebook Mobile a bit more often than perhaps he should. His web site is at www.artadams.net.