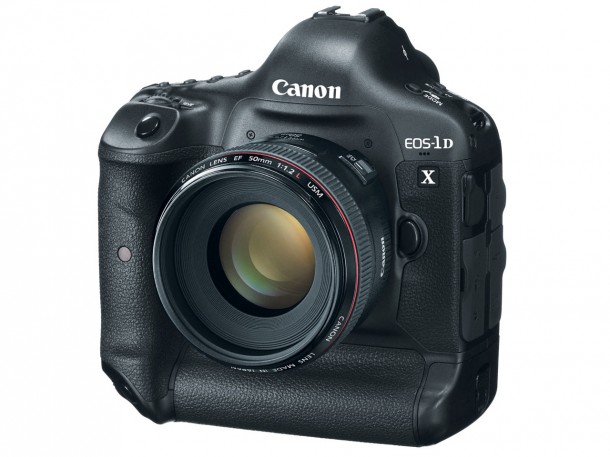 Yesterday Canon launched their new flagship DSLR, the EOS-1D X. Please explore my previous post for a full rundown of the tech specs, this time I will be concentrating on the improvements that Canon have made for those that want to use the camera for movie making. The camera offers the first major improvement to Canon's DSLR video functionality since the firmware update for the 5d Mark II that enabled 24p.

HDSLR video is now three years old and developments have really been few and far between. We know that Canon was caught by surprise when people took so readily to using the EOS-5D Mark II for making movies. It was never designed with that in mind but due to community pressure Canon eventually enabled some clunky audio controls and 24p through a firmware update. Subsequent cameras like the EOS-7D and the EOS-1D Mark IV had very minor improvements like the ability to shoot in 50/60p at a reduced resolution but there were no advancements. The reason for this is the development cycle of a new camera is many years, the 7D and 1D4 were already in development when the 5Dmk2 was released so there were only minor things that Canon had time to incorporate into those cameras. What they really needed was a totally new camera, one that could be built from the ground up with the knowledge that it would need to have some killer DSLR video functionality to push things forwards. Enter the EOS-1D X.

Through consultation with leading DSLR filmmakers Canon surely compiled a wish list of features. The task then would be to see how many of these they could cram into a camera that first and foremost needed to be a ground breaking stills camera. In that situation there will always be sacrifices and features left by the wayside but we'll likely see those in a future video specific camera very shortly. So let's take a run through all the new features and improvements that DID make it into this new camera.

Whilst obviously not a change made solely for video purposes it's something that almost everyone wanted to see. The shallow depth of field offered by a 35mm sensor gives even more control over depth than a super 35 sensor or an APS-C sized sensor like those found on the 7D. In fact the 7D sensor and a Super 35 sensor are fairly close in size and a 35mm sensor is much larger. An interesting thing to consider here is that Canon looks set to launch some new large sensor video cameras on November 3rd but those will almost certainly conform to the Super 35 standard to allow it to work with the vast range of PL Mount lenses out there. That means that there is still room for the 1D X in the video industry for those that want the look of a full sized 35mm sensor. Many people used the 5dMK2 for that very reason when there were plenty of S35 and APS-C options out there so I'd expect this to still be a very popular camera, no matter what Canon release in November 2011.

A further benefit of the full frame sensor is it's low light performance. The EOS-1D X brings a standard iso range of 100-51,200, an improvement over the previous 1dMK4 which was already no slouch in the dark. Factor in the improvements you will see of a full frame sensor over the 1.3x crop and we are surely looking at a camera that will perform better than anything on the market to date. This is likely to be a second area where this camera will outperform any Super 35 sensor option that may also be on the market.

As I mentioned, this is really the first time that Canon have had the chance to design video into the camera from the ground up and they had it in mind right from the sensor design. We are promised improvements in artifacting and moir©; from the Canon technical paper on the 1D X:

Previous DSLRs have caused no end of headaches due to their lack of SMPTE Timecode. This was probably the most requested feature from people shooting professionally with these cameras. Now we have an easy way to sync separately recorded audio tracks and also footage shot simultaneously on multiple cameras. There appear to be four options for the timecode menu :

The time synchronization functionality appears to be available in two ways. Either you use the new WFT-E6 wireless accessory or you connect cameras together directly with an Ethernet cable. The second method is preferential as ad-hoc networks do not work with the WFT so they require a router. But it does mean that synchronization is limited to being between other Canon EOS-1dXs. There's no way to sync with other video cameras which is a real disadvantage.

What is not yet clear to me is whether the timecode itself appears on the main 3.2″ LCD screen or whether it runs on the secondary screen beneath this. The latter would make far more sense…

Whilst previous cameras have offered audio control the 1D X will be the first Canon DSLR to show audio levels on screen during recording. As before, the camera captures mono audio with the built in microphone at 48KHz and stereo from the 3.5mm mic jack on the side of the camera. Previous camera required you to set the levels prior to recording and then offered no way to monitor them during a take. Now you will have a visual reference and also be able to adjust the levels during recording to make sure that nothing gets clipped. The image below shows the audio level meter in action during recording. (screen grab from Canon promo video) 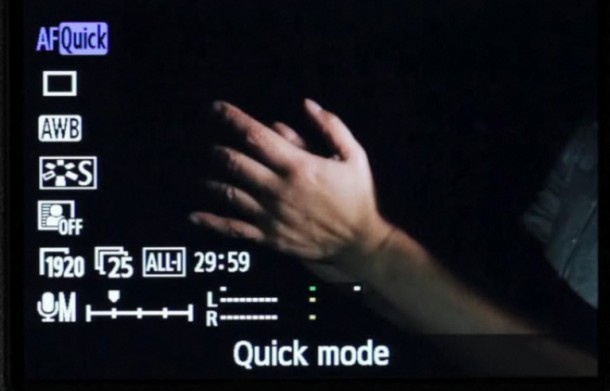 The camera still records to an H.264codec (unfortunately) but at least Adobe and Apple can now handle the files natively in timelines unlike when the 5dmk2 was originally released. You now have the option of selecting the compression type though, either IPB or ALL-I.

Canon does a great job of explaining this bit in the technical manual:

The first type of compression available is IPB. The B in IPB stands for Bi-directional compression. With IPB differential compression is carried out by predicting the content of future frames, with reference to both previously captured frames and subsequent frames. Like the IPP compression method used in previous EOS DSLRs, some data is stored in a Group Of Pictures (GOP), meaning that frame-by-frame editing will result in lower image quality. When using IPB editing video in-camera to trim clips can only be done in one-second increments.

The second method of compression is designed for users working in high-end editing systems or those looking for the very highest quality. This compression is called ALL-I. ALL-I stands for ‘Intra-coded Frame' and it differs from IPB and IPP because all frames captured are treated as Intra-frames or key frames. Although each frame is still compressed, there is no further compression as each frame is seen as an individual image.

ALL-I files will be roughly 3 times the file size of the bi-directionally compressed versions but they will hold up much better to frame editing and grading. A nice option to have for higher end productions.

Incredibly Canon have integrated a capacitive touch panel into the Quick Control Wheel on the back of the camera. Upon enabling the Silent Control Function setting in the menu, filmmakers will be able to adjust audio levels, exposure compensation, iso, shutter speed and aperture by simply touching the control wheel. There will be no need to physically rotate the wheel which means that the CLICK CLICK CLICK of the wheel will not be heard on your recording and if you are gentle hopefully no vibration will show on video either as settings are changed. This is a perfect example of how much Canon has thought about the video functionality of this camera because there is no use for this function for a stills photographer. This is purely for the filmmakers. 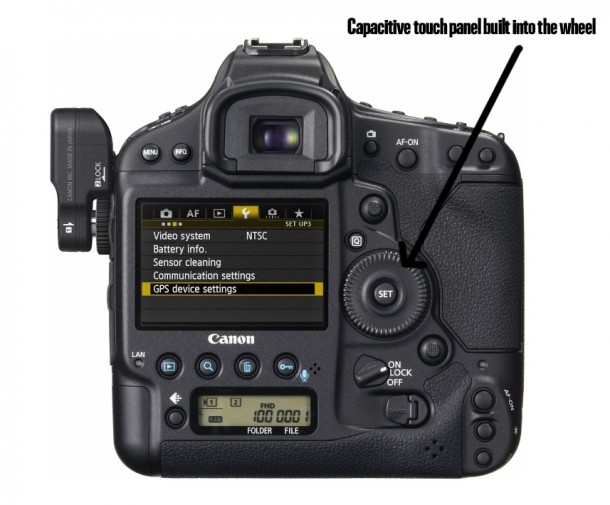 The maximum clip length has now been increased to 29 minutes and 59 seconds. Interestingly if you exceed this limit you are subjected to a huge taxation in Europe and Canon's Chuck Westerfall was quoted as saying that it would add %30 to the cost of the camera! I'm fine with 29 minutes and 59 seconds then! Previously the cameras were limited to 12 minutes and the 4GB clip size that is a limitation of Compact Flash file systems. Canon have found a way around the size limitations by introducing a seamless secondary file creation that automatically starts another MOV file on the card without effecting or ending recording. This is fantastic news for the documentary shooter out there who want to leave cameras running during interviews !

Previously limited to janky IR remotes or physically pressing the buttons on the camera body, the 1D X now allows use of a regular Canon wired remote in the cable release port on the side of the camera. (Thanks to Dan Chung for the heads up on this one) Dan also speculates that you will be able to use wireless triggers such as the Pocketwizard to trigger the video record. This seems likely if it is used with a motor cable just as the wired remote is. Now if you ave your camera buried inside a huge rig, or up on the end of a crane or boom you won't need to physically press the record button on the camera body !

Enabling Drop Frame in the video menu will now drop two frames from the frame count every minute to compensate for timecode Vs frame count error that can creep in during longer takes with non whole-number frame rates like 29.97 or 59.94. Not really something you would worry about on short takes but for running long interview or documentary takes where you want to sync audio or second cameras later on then it can become a factor. Canon's example:

The 1D X will correct CA on the fly during video recording based on the lens information for the new CA Correction feature that is found in the stills mode.

Video thumbnails are now baked directly into the MOV file. No pesky sidecar THM files which means that you can copy the MOV files to cards and have them play back in camera. Previously you also had to have the corresponding .THM file on the card as well for the video to play on the camera.

Here's a summary of a few things that filmmakers would have liked to see, but haven't made the cut.

So there we have it. Is it ground breaking ? For video no, not groundbreaking but it offers a good collection of new improvements that prove Canon were really listening to what people wanted. Considering we are on the verge of a huge video camera announcement from them in November this is actually more than I was expecting and I think that's because the know the full frame sensor is still going to attract a lot of filmmakers to this camera. It will certainly be the best performing video in low light situations and if we get improvements in the dreaded 'jello' as Canon are promising then I think this will be well received. Of course this is all relating to HDSLR video, for stills photography this looks to be a new king so stay tuned for more on that in the future!

The modern fashion for something we’ll term grunge in film and television pictures is something that future generations might...