Revealed at SIGGRAPH 2019, it was considered by media outlets as VentureBeat as the ‘Biggest wow moment’ of the show! Now you can climb Michelangelo’s scaffold at the Sistine Chapel in VR.

Il Divino: Michelangelo’s Sistine Ceiling in VR is a free app that delivers an experience of the highest fidelity, as you can see individual cracks and brush strokes in the plaster of the famous chapel.

Created exclusively for the SIGGRAPH 2019 Immersive Pavilion, by the team behind the previous SIGGRAPH 2017 VR piece: Il Gigante: Michelangelo’s David in VR, this second title continues to explore the work of the famous painter, allowing users to climb onto the painter’s scaffold and admire the painted ceilings in ways that no regular visitor of the Sistine Chapel is able to.

This is, again, an example of the potential of Virtual Reality to give the public a unique point of view of artistic creation. If you’ve been able to visit the real place, this experience allows you to go into the detail that was not possible to admire before. If you’ve never visited the chapel, this is a great way to admire the work of the painter and discover one of the artistic wonders of the world.

Il Divino: Michelangelo’s Sistine Ceiling in VR is also viewable in a non-VR mode, available for keyboard and mouse play, but once you’ve tried it in Virtual Reality there is no way back to a flat screen: it’s as if you’re watching postcards of a place against really being there. When you climb atop Michelangelo’s scaffold, the sense of vertigo looking down to the chapel’s pavement is real! Now, the documentary will reveal you, the artist spent whole days there, to paint the delicate textures you can now admire down to the individual cracks and brush strokes. 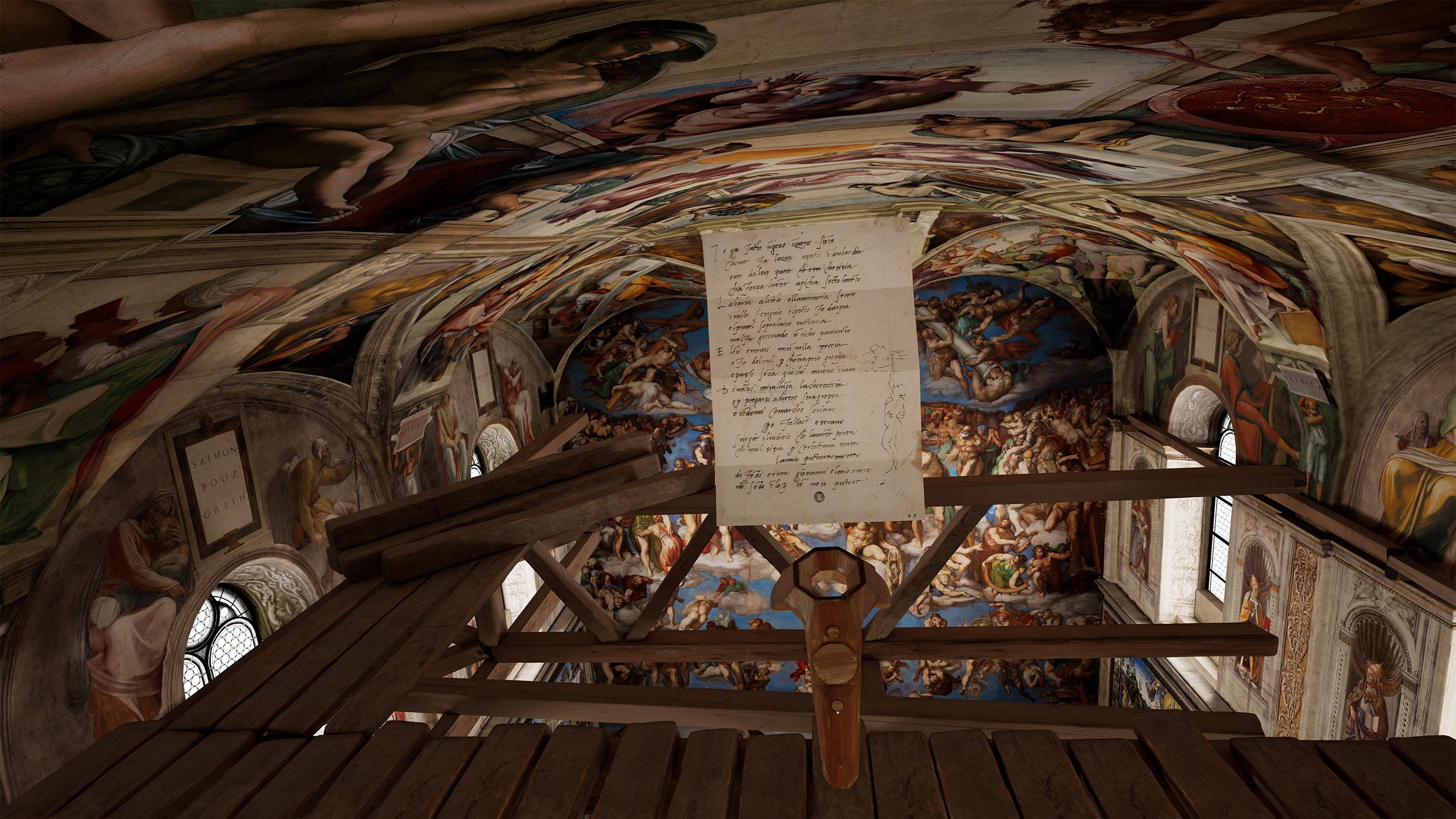 A project to be improved in the future

Created by a team that includes Christopher Evans, Wes Bunn, Elijah Dixson, Paul Huston, Scott Clifford, Nicole Gorny, Chris Norden and Kira Foglesong and published by Christopher Evans, Michelangelo’s Sistine Ceiling in VR has a goal: to leave a lasting gift that can be used to spur interest in Michelangelo’s work, democratize the ceiling and allow anyone in the world to view and learn about it. Chris Evans says that the project “was only possible with the help of friends and coworkers” and adds that “I am always on the lookout for other CG artists interested in Michelangelo’s work to help”, confirming that the app will continue to be added to and improved in the future. 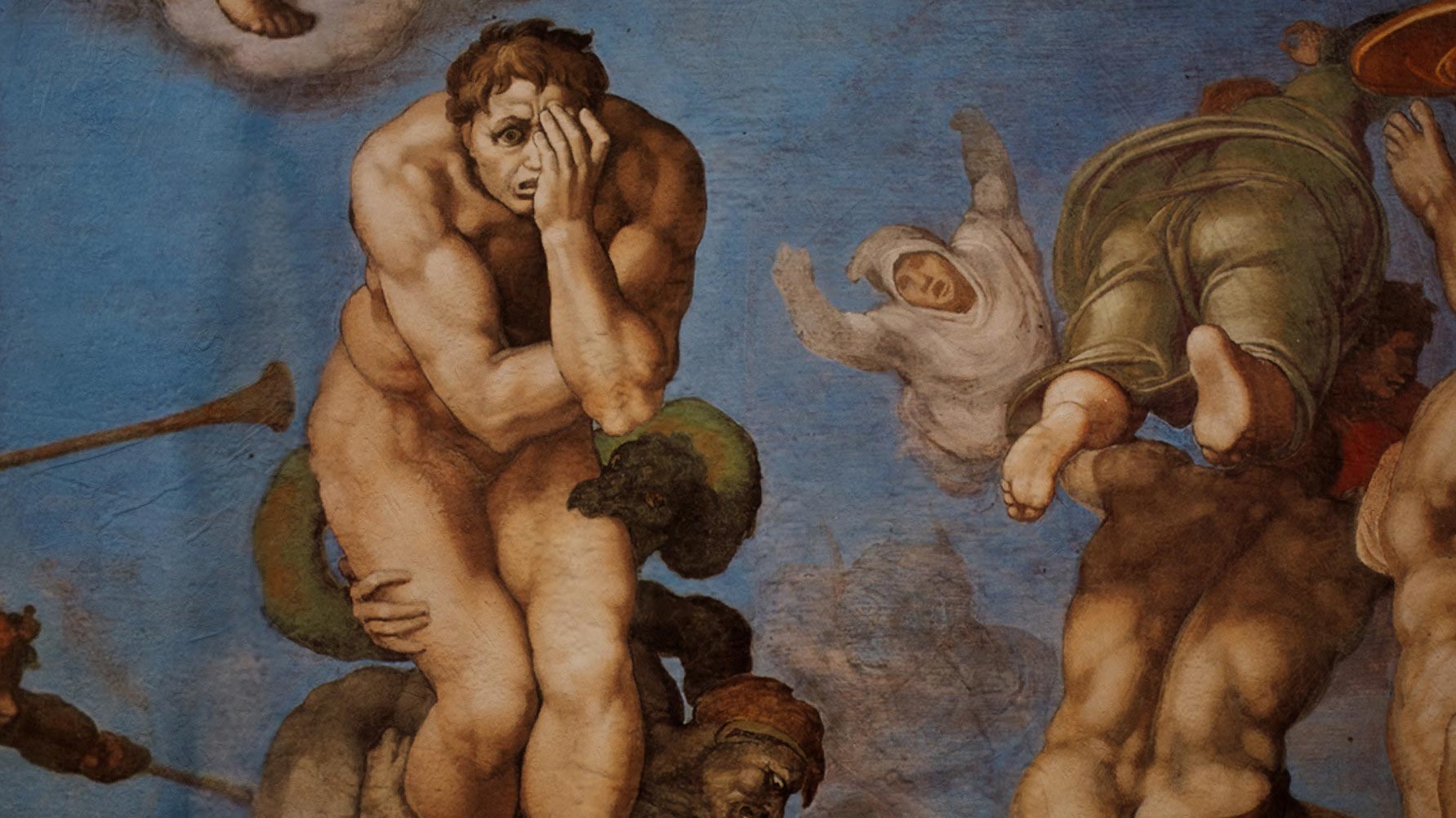 The whole story behind the project can be read in multiple blogposts which those interested can read on the website created for Il Divino: Michelangelo’s Sistine Ceiling in VR. There, Christopher Evans reveals that “at the moment, the pre-restored art assets are derived from some 1960s elephant folios. If you have access to high resolution, pre-restoration images, those would be a big help” and suggests ways people can “help research the damage caused by the restoration attempt.”

To create the app the team relied on historical drawings and meticulous documentation, including the schematics documenting famous places, down to the millimeter created by a famous French architectural historian, Paul Letarouilly, whose drawings and schematics are being used in the rebuilding of Notre Dame. Letarouilly documented the Sistine Chapel, as part of his Vatican series. These engravings from the 1800s were instrumental in creating the project, says Christopher Evans. 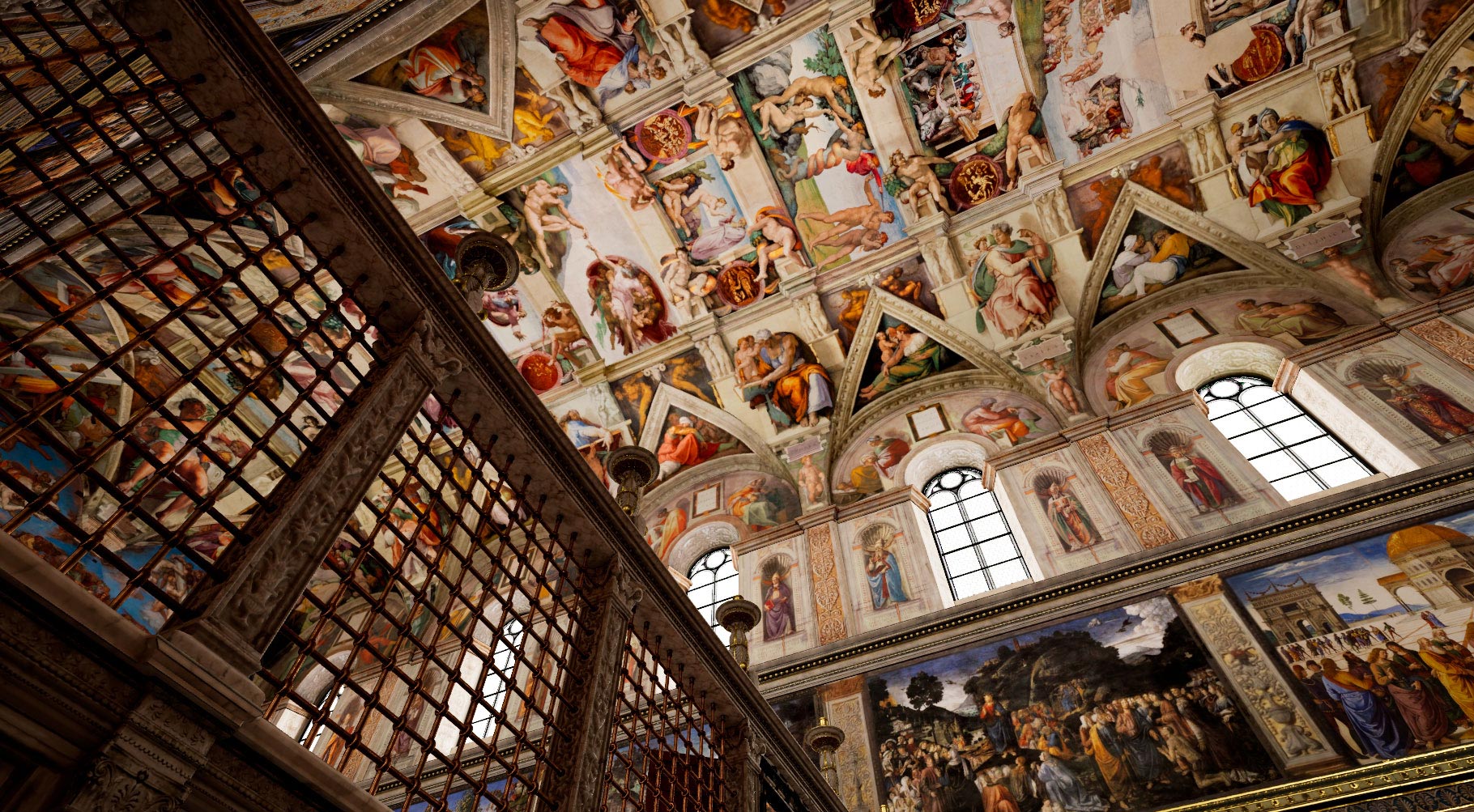 A longtime passion for Michelangelo’s work

To find more about the whole project, read the interview with Chris Evans, SIGGRAPH 2019 Games Co-Chair, where he shares his longtime passion for Michelangelo’s work, and how games technology can be used as a form of art, to give viewers the chance to physically stand inside the Sistine Chapel, stare at its ceiling, and absorb Michelangelo’s astounding work. 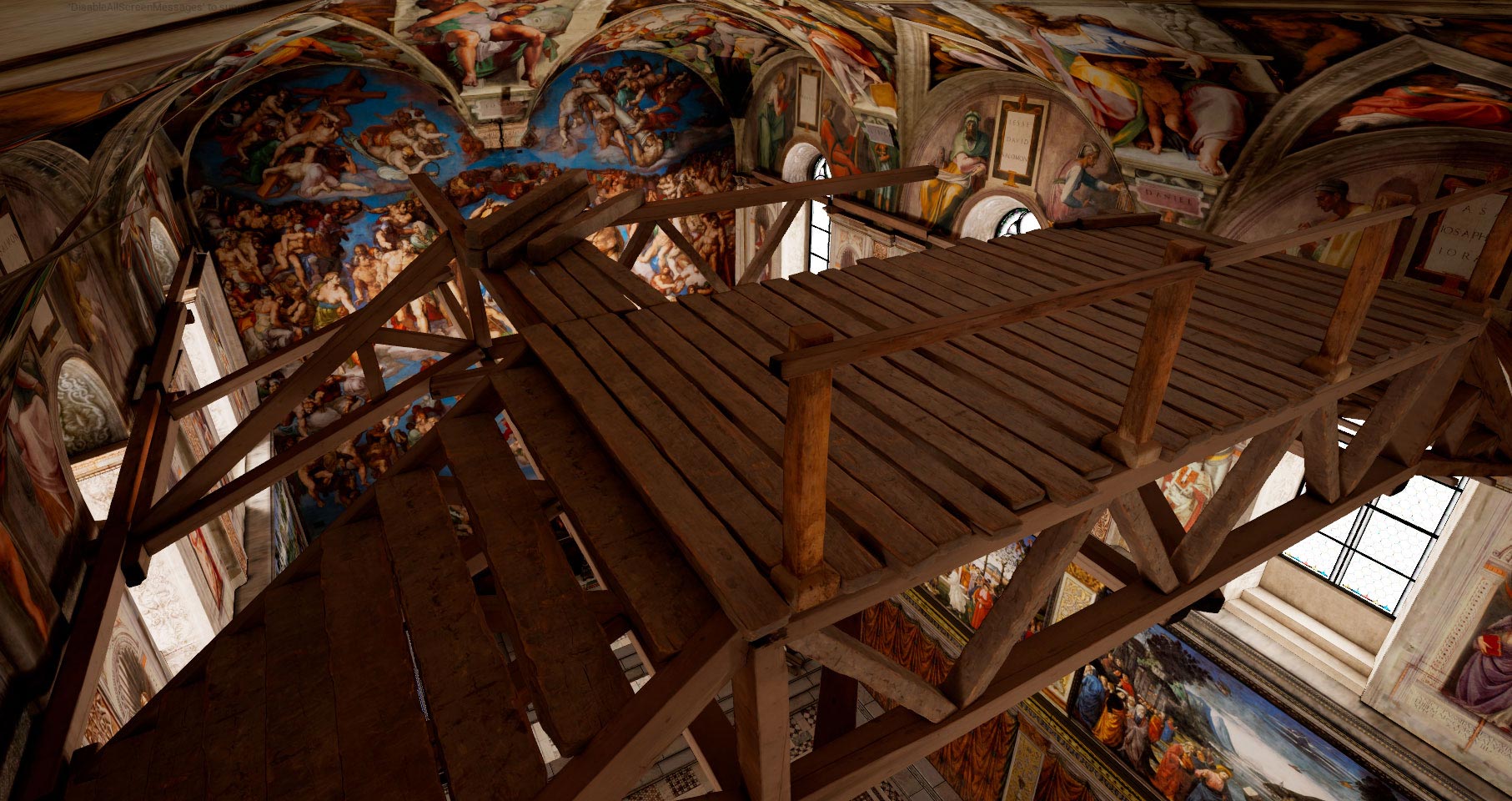 Il Divino: Michelangelo’s Sistine Ceiling in VR is, as noted before, a FREE experience available from Steam. All you need to fully explore it is a Virtual Reality headset. When the app was introduced, in 2019, the Valve Index VR headset, which was a new reference in terms of optics was used at SIGGRAPH. Now, if you want to explore the app at the highest resolution possible, within the consumer level VR headsets, the HP Reverb G2 may be a good option… if HP manages to solve the problems the headset’s cable seems to have, that make it unreliable.

Independently of the headset used to explore Il Divino: Michelangelo’s Sistine Ceiling in VR, this is a must-have title for any VR library, a new app to add to the series of articles ProVideo Coalition started last week, with Edvard Munch’s The Scream, to help readers start or expand their collection of VR experiences.