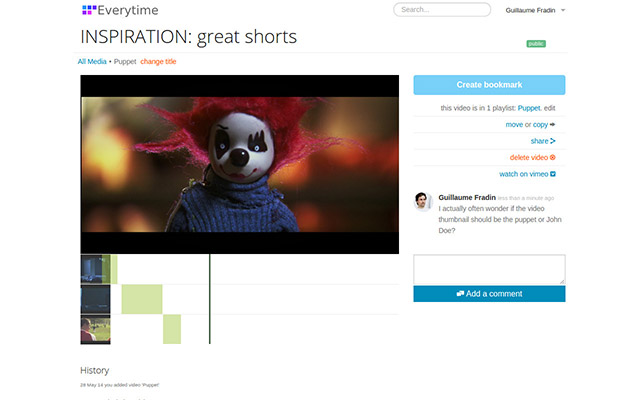 Everytime is a project management app for creatives. If you work with videos, sounds or images, it might just be the right tool for you. In the case of video, it makes for an easier understanding of how movies are created, allowing to collect and comment on multiple segments that the production team may use as guidance for their own work.

Everytime is the creation of Guillaume Fradin, a professional that has been evolving in the media industry for more than 15 years, between London, France and New Zealand. He worked initially in the research & development departments of major visual effects companies. He soon transitioned to roles that would allow him to combine artistic skills as much as technical ones. His work has then been seen in major movies such as Avatar and Gravity.

Guillaume Fradin had a dream: create a tool to make his work easier. A few years ago, while completing a short film, he felt many of the steps during its creation could be made easier, if there were ways to compare notes, different sources of material, ideas. Guillaume Fradin remembers that “first, during the pre production, the director of photography, set designers, music composer and me had lengthy discussions about what we wanted to achieve. Lots of those conversations where conceptual. What is the main idea behind the short? What are the motivation of the characters and how to we translate those in cinematic language?”

It was already difficult to keep track of all those ideas, but there was more to come, continues Guillaume Fradin, as any production also takes “inspiration from existing material. Movies, musics, photos, paintings. Talking about them required them to be in the same room. Everyone would bring DVDs, books or anything that would feed the conversation. Although enjoyable and instructive, those conversations were taking too long. Not because of the conversations themselves, but because of their logistics: they had to be in the same room and browse those movies and books. There had to be a better way.”

The idea of creating a collaborative tool began to take shape in Guillaume Fradin's mind. While writing a feature he looked for inspiration in the movies he loved, starting with “Requiem for a Dream”, and started to take notes about how the scenes where constructed, how the character arcs where evolving. Once the movie was finished, he had several pages of notes. That was great and he learned a ton in little time.

But that would not scale. There was no way he could take notes for many movies and consult them all easily. He also wished he could simply click on a note and have the related scene open up in front of his eyes. Again, there had to be a better way. He needed an app that allowed him to take notes on anything. On a moment inside a movie. On an image. On a drawing. And he had to be able to share those with his team easily. And it should not be a one-way process. Each team member had to be able to suggest ideas easily to the rest of the team.

Researching ideas and sharing them had to become friction-less. That is what became Everytime. It has been used successfully many times now. It helped him and his teams get inspired for the visual effects they created for Avatar, Gravity and many other projects. It helped understand how other movies were created. It allowed him to complete two screenplays.

Each day, says Guillaume Fradin, “you encounter new sources of inspiration inside videos or music. Maybe at a specific moment you will see a well composed shot, a great acting or a beautiful melody. Any of those can spark new ideas and help you on a project. It could be for a film you direct, a music you compose or a book you write. Those moments of inspiration are difficult to capture. Even harder to share. This is what Everytime can help you with.”

With Everytime, you can save any moment from Youtube, Vimeo, Soundcloud and any media on your computer. Those moments are then easy to share, publicly or privately, easy to discuss about and easy to find. Everytime is an interesting app, easy to use and share, that can transform the workflow of filmmaking teams to collect and share visuals. 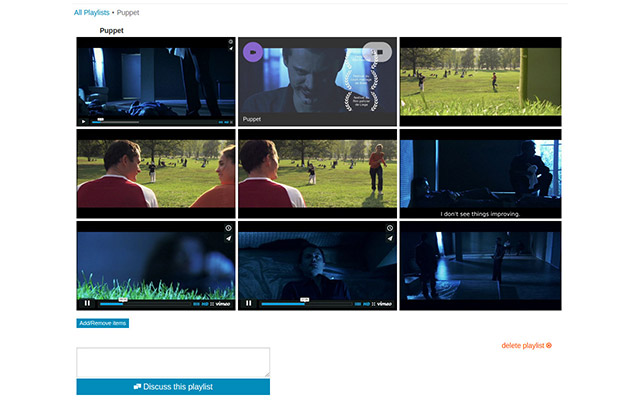 Everytime is a work in progress app. It still only works best with Google Chrome, but other browsers will be compatible in the near future. Firefox in the next step. The application, which works on Windows, Mac and Linux, needs to have its functionality extended to phones and tablets, where it makes a lot of sense. Improvement on present functions and introduction of new ones are part of the plans for Everytime.

Everytime integrates with third party apps to facilitate users who would want to either import their current work or export their data. It currently allows import and export from Final Cut Pro. It is also possible for developers to use an api to develop their own app on top of Everytime.

Potential users interested into trying he program can use the a step by step demo tutorial available on the website, and also watch the demonstration video. The price plans to use the application are also present, with an optional free account that may be a good starting point to explore the program. Find more at the website for Everytime.