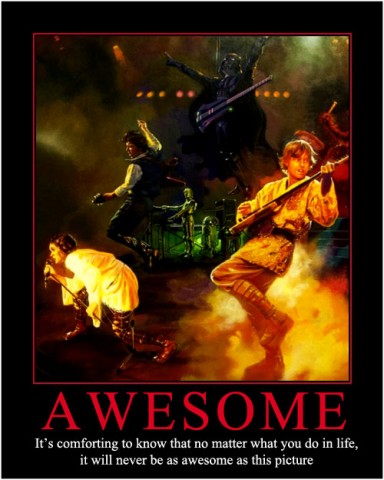 Over at CanonFilmmakers, I ran across a good post that tries to inject a little perspective in all the technical discussions on VDSLRs, Red, and really filmmaking tools in general. The author links a (hilarious) Louis CK video clip in which Louis does a little bit about everything in life being amazing, yet nobody is happy. There’s a clear correlation to filmmakers and gear discussion. We have amazing tools at a fraction of the cost of of previous generations, yet we still want more. We tend to get bogged down in the technical minutiae of each system, and sometimes can’t see the storytelling forest for the trees. Paul Zadie wrote a good post on this a couple of months ago…

At FreshDV, we’ve always been interested in reporting the technical. We talk about it all the time, because we are a geek’s geek. Ubergeeks even. We dig this stuff. It’s information that filmmakers should be aware of (like VDSLR moir© issues). But perspective is always good. As we always say…it’s just another tool. Use the right tool for the job, but most of all, use it. At any rate, these sort of posts are good reminders that the best tools in the world aren’t going to tell your story for you. A great story captured with subpar gear still trumps the best equipment used to tell a weak story (see: Michael Bay).

Here’s an excerpt from that post over at Canon Filmmakers. I recommend checking it out, in addition to this little rant he offers some good tips on getting the most out of the Canon 7D:

“We need to master our craft and get back to the basics. Shot composition and storytelling. I plan on working on those two myself. Be thankful for the amazing technology we have at our disposal and stop whining like a bunch of spoiled children.

Aliasing,WAHHHH. Moire,WAHHHH. 12 minute limit WAHHH, No Audio Control WAHHHHHHH. What do you want Canon to give you for $1700 ? Should it come with your own personal DOP to set all the shots up for you too? Do you remember what it took a few short years ago to get this type of look for a film? It would have been impossible to do what you can now for this type of money.

So, instead of this RED vs. the Canon DSLR civil war that is erupting in the filmmaking community, How about this ? Take whatever equipment it is that you have the good fortune of owning and go shoot something amazing. Let your limitations be your inspiration.”

After that little diatribe, I wanted to point out a recent thread over at Reduser that deals with Zone Chart tests showing aliasing issues with the 7D and the Red One. Obviously the Red performed much much better in that area, there is no doubt that it is a far better cinema camera than the 7D from a specs perspective. But I was struck by the surprising lack of fanboy “yeah, get ’em” responses in the thread…most people seemed to understand that these VDSLRs are flawed, yet useful tools in certain applications. It was a breath of fresh air, really.

One last final note in closing…the everything is amazing rant is timely and on-target. We should all be aware that this is a good time to be a filmmaker, from a tools perspective. But there are so many valid reasons to point out weaknesses in gear…it is part of the creative process, and not to be pushed aside. Understanding what a tool can and can’t accomplish is critical for experienced filmmakers, particularly those who need a specific function or capability to capture their creative vision. So let’s not pooh pooh those discussions on technicalities, they are important and not to be marginalized. Instead, we should approach these discussions with a broader realization of just how amazing it is to be a filmmaker today. Happy filmmaking!