Just as you shouldn’t use all effects at their defaults, don’t be shy about combining them with other effects. 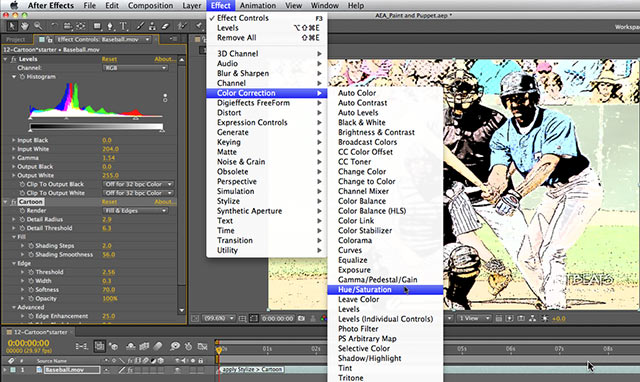 In this second installment of learning how to get better results with the Cartoon effect, we will go beyond altering Cartoon’s own parameters from their less-than-ideal defaults and explore pre- and post-processing the video clip getting the Cartoon treatment.

We like to apply the Levels effect before Cartoon. This allows you to adjust the luminance values in the original footage before the different colors are divided up and posterized by Cartoon. Play with the Gamma control in Levels to alter the solid fill colors and regions that Cartoon chooses.

Next, we follow Cartoon with a color correction effect – it can be as simple as Hue/Saturation. Rotating the Hue value offsets the flat colors that Cartoon produces, allowing you to “ink” your video with colors far different than those that appeared in the original.

Simulating the look of cartoons is not all about fill colors and strokes: Part of their charm is jerky movement caused by their often lower frame rates (typically 10, 12, or 15 frames per second). In additon to the effect chain tricks discussed above, the movie below demonstrates a couple of different ways to alter the frame rate of the result:

In the next installment, we’ll show how to combine Cartoon with Brainstorm get looks you may not have known Cartoon could create.

(Click here for the first installment in this series on Cartoon.)