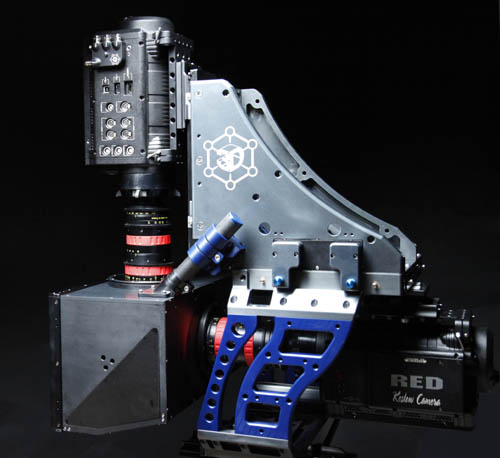 Element Technica, designer and manufacturer of the revolutionary Technica 3D family of 3D rigs, has delivered its 50th Quasar 3D rig. The Technica 3D Quasar mounts full-sized and equipped digital cinematography cameras such as the RED ONE, Sony F23/35 and 1500, ARRI D-21 and Genesis in stereoscopic pair configuration.

The Quasar 3D rigs have been quickly adopted by both feature film producers and live sports and entertainment venue productions because of the precision control the rigs afford the stereographer, ease of configuration, and the rigs’ ability to shoot in either the side-by-side or beamsplitter mode. The Quasar can be completely set up in under 30 minutes, and converted from side-by-side to beamsplitter mode in less than 10 minutes.

Quasar 3D rigs are now in the inventory of camera rental houses serving feature film and OB (outdoor broadcast) sports and entertainment event producers, both in the U.S. and Europe. Almost as soon as OFFHollywood of New York acquired its Quasar 3D rig, it was put to work filming the feature “The Mortician.” Panavision UK supplied six Quasar 3D Rigs for live coverage of the 6 Nation Rugby Tournament 2010 in London and Rome. Action 3D Productions chose Quasar rigs to shoot its “Larger Than Life in 3D” concert film, featuring the Dave Matthews Band, Ben Harper and Relentless7, and Gogol Bordello.

At the 2010 NAB, Element Technica will introduce the compact Neutron rig, for smaller cameras. With its ability to mount the smallest HD cameras, including these with tiny 2/3-inch or 1/3-inch imagers such as the SI-2K Mini and the Iconix, Neutron is the ideal solution for providing 3D imaging from the smallest form-factor.