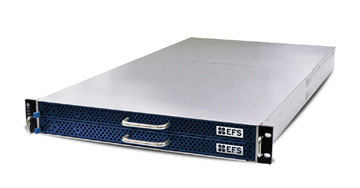 Attendees to the IBC2014 exhibition can book a private demonstration to learn more about the new XStream EFS at http://www.editshare.com/about/about-us/book-a-demo

“We have designed EFS for mission-critical media operations, such as news and sports as well as facilities working with large file standards like 2K, 4K and beyond. XStream EFS gives these large workgroups, which often have complex workflows, an open storage platform with key media sharing functionality like project sharing, combined with blazing-fast performance,” comments Andy Liebman, founder and CEO, EditShare. “In addition to EditShare’s core media-driven architecture, the XStream EFS system offers multiple layers of redundancy that can tolerate the failure of multiple drives, even an entire node. With XStream EFS, you have an intelligent media storage platform with rock-solid reliability – the best of both worlds.”

XStream EFS is based on 16-drive storage nodes, each with their own motherboard, CPU and hardware RAID-6 configuration. Every individual node has read/write performance that can exceed 2GB/sec, as well as redundancy that can survive the loss of any two drives. Each XStream EFS systems start with a minimum of four nodes, connected by 10-Gigabit or 40-Gigabit Ethernet. Whenever a file is written to an XStream EFS system, pieces of the data – along with a second level of redundancy information – are spread across multiple nodes in such a way that users get the combined speed of the nodes, plus extra security that will protect files.

Tremendous Scalability
Expanding an XStream EFS system is as simple as adding a new node and clicking a few buttons. In the background, pieces of data are immediately redistributed until each node has roughly the same amount of free space. During the rebalancing process, the EFS system is fully usable, and when the expansion operation completes, the system is bigger and faster than ever before. With XStream EFS system, users will always have just one logical volume (or “namespace”). There is no need to split up files between multiple physical volumes.