Big color in a small package

Once you get past the bright red rear, and the fake carbon fiber printed plastic it seems Panasonic has pumped steroids into their latest camcorder. I was expecting a camera more akin to the Panasonic DVX-100 which I ran into many many years ago.  If I remember the older DVX the camera was lacking in light sensitivity and dynamic range, but was still very capable for its time. With the DVX-200 Panasonic seems to be telling shooters “There’s no reason to be shooting with a DSLR.”

Before I tested the camera, before I learned the menu system, and before I really understood how best to shoot with the DVX-200… I flew with it in a helicopter to capture some aerials. Hanging out of a R22 isn’t the best place to trouble-shoot, but I figured what the hell. I mounted the camera to Kenyon gyros powered it up and we took off to capture sunset shots of Nashville.  I literally found V-Log L in the menu moments before lift off. Having experience in an R44 helicopter I knew I’d be hard pressed to keep the camera perfectly stabilized. It was a windy day, so I shot 59.94 and slowed the footage down in Adobe. I was looking for smooth and Nashville. I got what I wanted. The frame grabs below are exports from DaVinci Resolve and are sized at 1080 x 1920 because that was my time-line setting for the project.

This is the picture setting you want to be shooting with the DVX-200. The color, the dynamic range, and the overall image are at the camera’s best when shooting VLog -L. When editing in Adobe all I needed to do to see great colors was apply the LUT. Some cameras you need to push and pull to get the best out of it. With the DVX-200 the workflow of shooting VLog – L and applying the LUT in Premiere is simple and gives more than satisfying results.

When shooting the more video like gamma curves the camera begins to bring back the single-lens camcorder look I’m not especially fond of: less than 12 stops of dynamic range and video looking color. So I nearly exclusively shot V-log L. With V-Log L the colors end up amazing and the overall picture is vastly superior. I suggest to only shoot on the V-Log L gamma when shooting with the DVX-200.

I found the footage from the DVX-200 to be relatively easy to color correct or grade in DaVinci Resolve. I was able to push and pull my aerial footage without the image totally falling apart or incorporating a ton of noise. If a shooter has their white balance set well then they can expect the 4K files to be relatively easy to manipulate. In Adobe, I was able to push and pull the footage a little less, which is totally expected. I did find the color to be what I expected from the shoot and subtle tweaking was all that was needed.

120fps why the hell not? When a camera shoots 120fps, I shoot 120fps. At least I’ll shoot it to test because not all 120fps are equal. The 120fps in the DVX-200 is reserved for HD only. It may be my eyes are used to seeing 4K footage, but the HD 120fps seemed a touch soft. I think we’re seeing a little bit of image loss to compensate for the 120fps. Makes sense and something I am comfortable with in a camera like the DVX-200.

Lets not forget about this one fact: 120fps has found itself into single-lens camcorders. This is a huge feature for a camera which leans toward the less sophisticated shooter or producer. When I was in film school I would have killed for those frames per second. Of course, this isn’t the only single-lens camera to shoot 120fps, but the feature is not wide-spread yet. 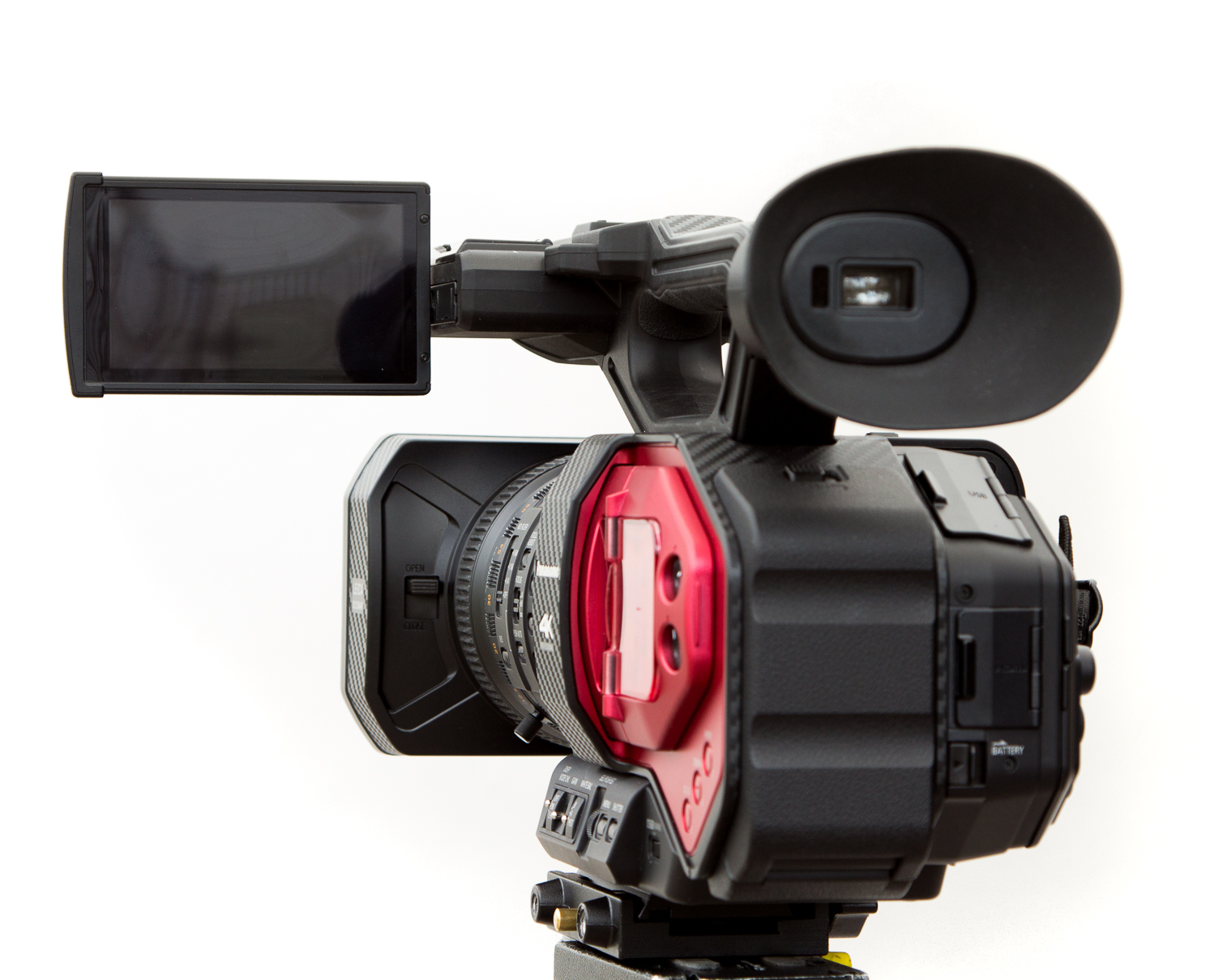 I am not a fan of deep diving menus. I like simple. I like minimalistic. I like cleaning looking and easy to operate. Panasonic has tried to make their menu these things, but this is still a camcorder. Camcorders, I believe, hide their best features in menus. It can be annoying, but once I find the path to my favorite settings I tend to not make many changes.

This camera is not like the older 1/3 chip camcorders many of us used back in the early 2000s. The Four Thirds sensor has a depth of field one can play with to help create a look. While the depth of field will be nowhere near a Canon 5D DSLR or a Sony A7s it does do a good job replicating Panasonic’s slightly larger sensor found on the GH4. What you get out of the DVX-200 is beefier processing power for a slightly smaller sensor than the processor one finds in the larger sensor GH4. In my sunset video found above you’ll see I shot some razor wire. I wanted to show the camera rolling through focus. I wanted to show a shooter can be selective with his/her depth of field. With this camera you can see I tended to favor shooting situations where I thought the wider depth of field would work well. City-scapes, aerials, and sports are all situations where a smaller sensor can help a shooter capture the shot.

The lens has some flare qualities to it. Personally, I love lenses that have an interesting flare to them. That’s why on my last shoot I shot with an Angenieux 25-250. Under low-light with the ISO/Gain set higher and the lens wide open you might find it hard to find focus spot on. Otherwise, you’ll find exactly what you expect out of the lens. It’s has a nice throw (nearly a 400mm when compared to 35mm), but not super wide (only around 29mm when compared to 35mm). Personally, I’d love to see a wider lens. 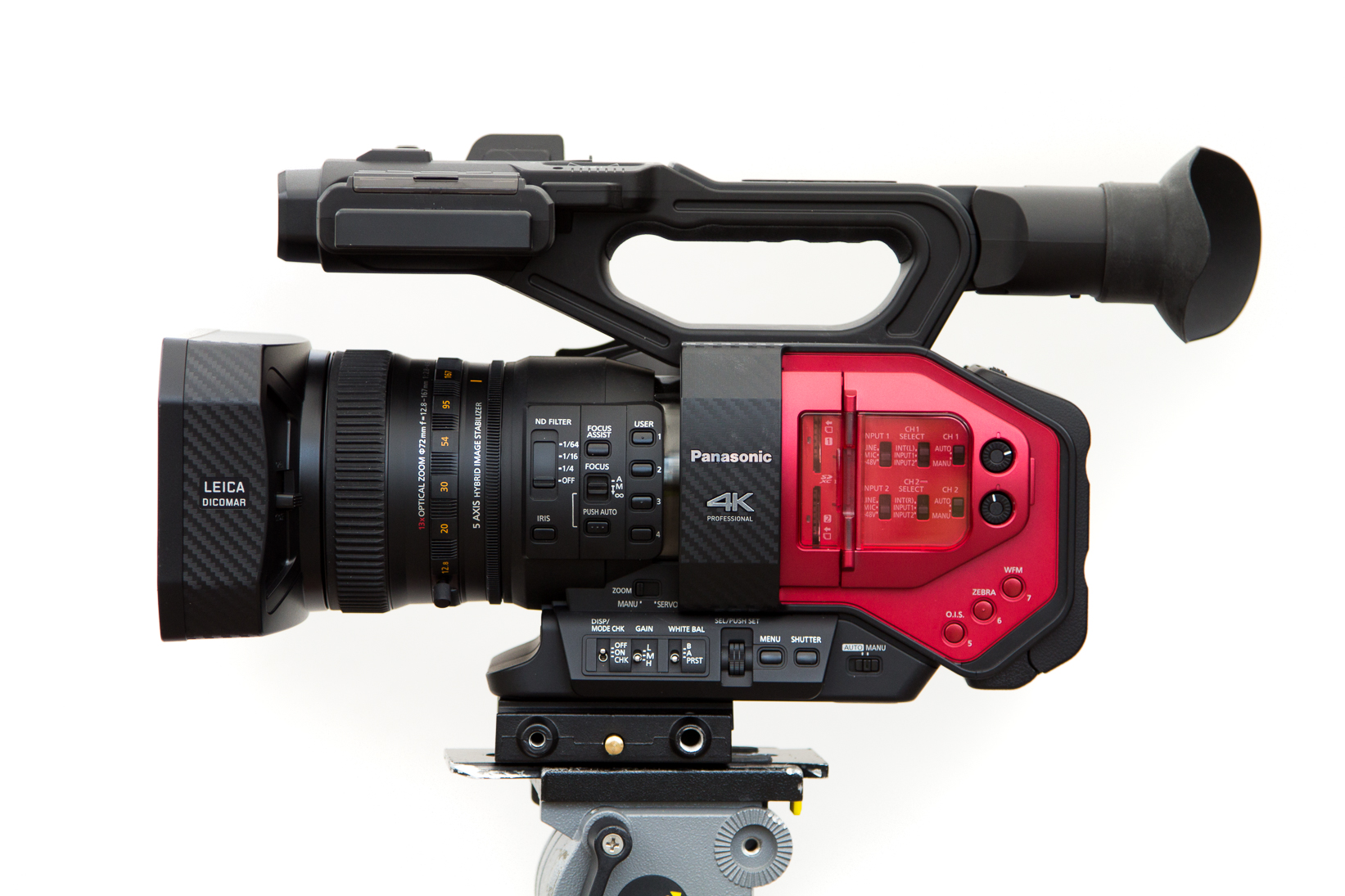 Three rings: one for zoom, one for iris, and one for focus. The throw for these was smooth if a little plastic feeling, but again this is a single-lens camcorder. If you’ve used a similar camera you find these lens rings comfortable. The focus ring has a nice long range of movement. Make no mistake the Leica lens does not have the short focus of a DSLR lens. The long range of movement makes raking focus that much easier on the DVX-200.

The Power Zoom Rocker. Yea,I turn those off and go into full manual mode usually. But… If I had to hook this camera up for a live remote or live broadcast then the power zoom rocker is an absolute must-have. 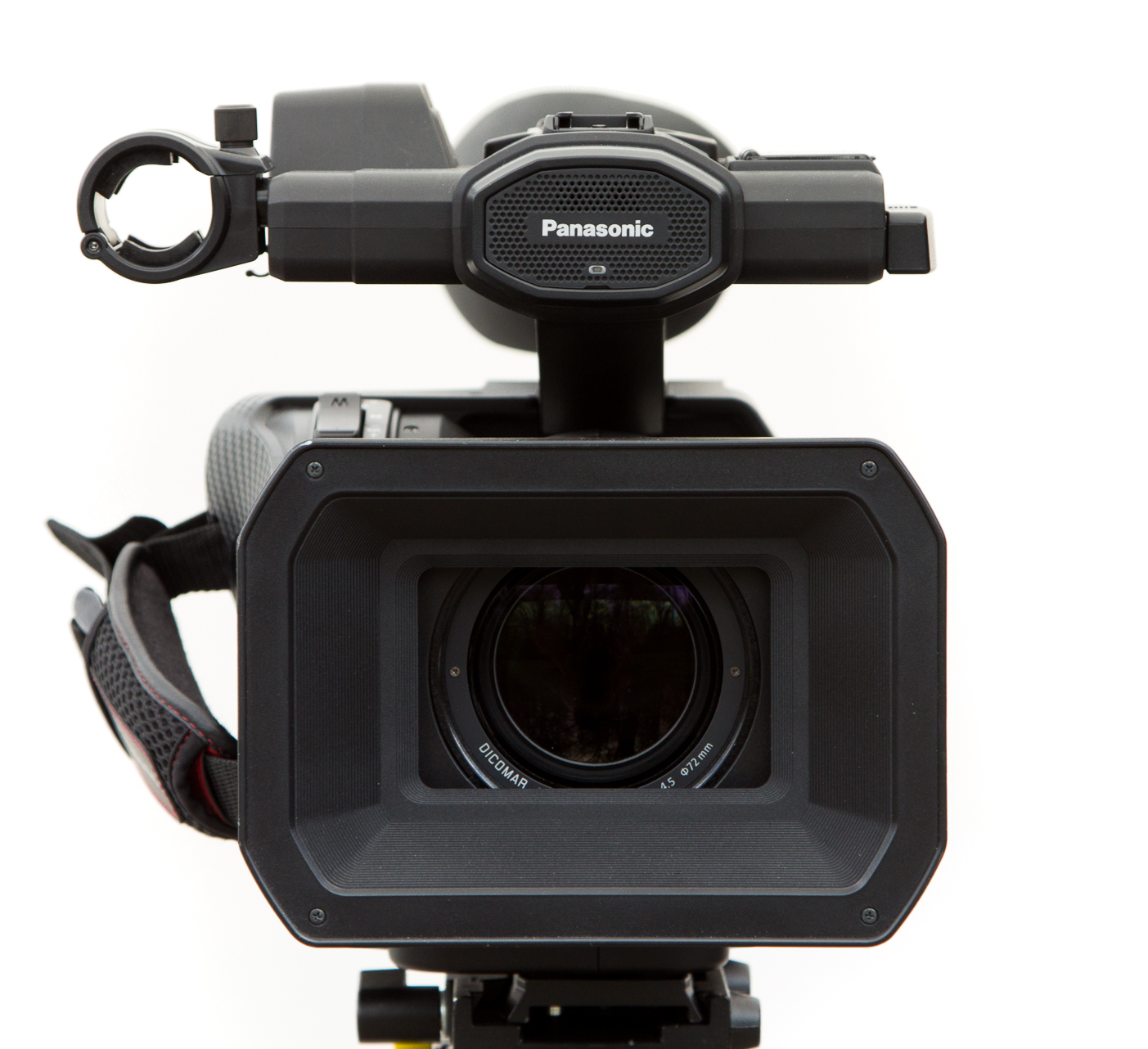 I almost exclusively used the DVX-200’s flip-out screen. I love how the screen can be stored away and kept safe from damage or scratching. What I didn’t use much at all was the EVF. The screen was the better option for me for two reasons: One it’s a lovely image on the screen, and two, I am not a huge fan of holding a camera in front of my face as I operate it. It isn’t a comfortable shooting position and I don’t think Panasonic intends shooters to shoot that way.  I think the EVF is best when the camera is on a tripod, it’s a bright sunny day, and you’re having trouble with glare on the flip-out screen. Then the EVF fulfills it roll well.

The EVF has a eye-cup sensor which will turn off the flip-out screen when your eye gets close to the EVF. In theory this is a nice feature. In practice I turned it off. My problem was I would operate the camera and my body would trigger the EVF on. This meant I’d lose my picture on the flip-out screen. I was then forced to adjust the camera so the flip-out screen would turn on again. This situation could become frustrating so I turned off the sensor. There is a sensitivity setting one can use when setting the EVF eye-cup sensor which could be a solution for many shooters.

Can one make this camera more cinematic-like than single-lens camcorder? I think in some ways it is possible. The V-Log L, the DCI 4K 4096×2160, and the 4/3 sensor with 12 stops of dynamic range definitely push this camera into an interesting place. When I shot 120fps of a high school baseball game the number one thought in my head was “this camera is punching above its weight-class.”

I feel like this camera is capable to delivering, in an easy to digest way, 4K/UHD with great color for the less tech savvy shooters and producers out there. I can image this being an alternative to more expensive cameras. I think having a single-lens camera can be a little liberating from the DSLR world. With the DVX-200 you don’t have to worry about changing lenses to capture the moment. I could see broadcasters turning to this camera as well as corporate video specialists who need to continue to show ever improving video without going over budget. Producers/shooters who are looking for single-lens, easy to travel with, and 4K capable camera then the DVX-200 might be a great camera for you.