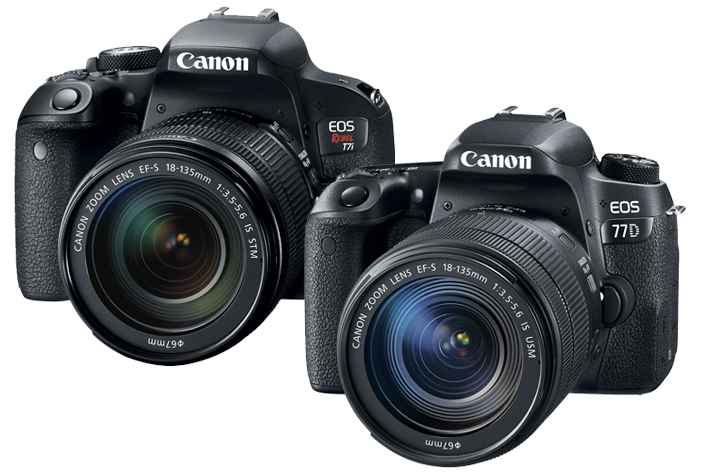 Canon has two new DSLRs ready for the CP+ show, EOS 77D and EOS Rebel 7Ti, both featuring the popular focusing system for video. Besides some confusion created by the new designation for the EOS XX, both cameras show no interest for 4K video.

The use of the EOS 77D designation when the first rumors of the camera appeared, left everyone puzzled. It’s true that Canon is reaching a point where it is difficult to choose what name to give new models, but with a EOS 70D and one EOS 80D in the market, where would the EOS 77D fit?  Shouldn’t there be a EOS 90D?

Well, we now know why it is a EOS 77D: it fits between the two models, being a little better than the EOS 70D and a little less sophisticated than the EOS 80D. The official announcement was hours away when I wrote this, but the rumour mills around the web – with some help from Canon, that always seems to let these “leaks” appear – have already defined what is the essential of this model in terms of specifications:  24Mpx, 45 AF points, 6fps, WiFi, Bluetooth and articulated touchscreen with an expected price of $899.

With the introduction of the EOS 77D Canon suggests that we may well, in the future, see more models following the same logic. If they do, it will be possible to keep the actual nomenclature for some more time: just imagine: EOS 81D, EOS 82D, EOS 83D, etc … They may also decide to jump five numbers each time, what probably makes more sense. Meaning they can create a EOS 85D, 90D, 95D, before having to rethink the whole XX series. But then, why did they not call this one EOS 75D? It’s very confusing, really, also because, apparently, the EOS 77D is presented as a replacement for the EOS Rebel T6s. Canon, what are you doing?

Maybe, and that’s my thinking, they will return to the initial designation, EOS D30 (launched in 2002, my first DSLR), and EOS D60, and go from there… Or maybe not, as then their cameras would sound much like Nikon models. Whatever they do, 4K continues to, seemingly, be distant from appearing in the EOS XX series, or, obviously, the EOS XXX series. In fact, the new EOS or Rebel 7Ti (EOS 800), which keeps in line with tradition when it comes to names, only offers Full HD (1080p/60). The same goes for the EOS 77D, so nothing new from Canon if you’re after 4K. Interesting is that both offer a connection for an external microphone.

Now that we’ve the stage set, let’s look at the official information from Canon, which is a mix of marketing and really interesting stuff… although I believe not for everyone. As confirmed, there is no 4K here, so all those in urgent need of 4K can go and read something else. For those interested, it is confirmed now that Canon takes Dual Pixel CMOS AF all the way done to the Rebel line. Doing so, they say that the “New Canon EOS Rebel T7i and EOS 77D cameras possess stunning autofocus capabilities” to which I add, “previously present in other models from Canon, starting on the EOS XX series”. That’s more like it.

According to Canon, and it is true, “the EOS Rebel T7i is the first camera in the EOS Rebel series with a 45-point, all cross-type AF system (the number of AF points, cross-type AF points and Dual cross-type AF points vary depending on the lens used) within the Optical Viewfinder. It is also the first in the series with Dual Pixel CMOS AF with Phase-detection and the first with a DIGIC 7 Image Processor. Creative filters for both still images and video will allow users to customize the look and feel of their content in new and imaginative ways.”

Yes, Canon is taking Dual Pixel CMOS AF all the way to its entry level models, what makes sense, as a more sophisticated Dual Pixel CMOS AF, equally or more precise and ideal for video, is in development. This is the time, it seems, to extend the asset it represents to all Canons’ DSLRs, especially when they are, as some suggest, a dying breed. Canon seems to think otherwise. For a complete coverage of the new products, DSLR related, from Canon, read a separate news piece with updated information, and some extra notes.