Putting the 3-axis gimbal through the paces

It is the 3-axis brushless gimbal that has placed itself in direct competition with Freefly's Movi. It is less expensive and claims to handle heavier cameras, but what is the real story. In this review I turn a blind eye to all the marketing spin and focus on whether or not this is the 3-axis gimbal to buy.

The camera took a hit! Spun on its mount and found itself 90 degrees off axis. My heart skipped a beat. It was a rental and the Ronin that was carrying the camera, not mine either.  It was one of those dreadful, heart wrenching, moments we all fear. How did a brand new Ronin and a Sony FS-700 get to be in this situation?

Football is in the air. In the South, where I live, I can practically smell the fresh cut grass and concession stand BBQ when I sit on my front porch. Every season television stations nation-wide have a show, or part of show, dedicated to High School football; ours is called Touchdown Friday. As the Sr. Promotions Producer/Writer this is my one promotional spot where the boss just leaves me alone. Last year I gave him a fluid master for the spot. This year I wanted to show off the action, be in the middle of it, slow it down, and make it dramatic.

Blackhawk Cinema had just received the DJI Ronin and they were looking for a test shoot. We have collaborated before and it made sense again. We rented a Sony FS-700, got in touch with Pearl-Cohn High School, and we had the makings of a pretty decent spot. We used the Ronin as a team; one running with the Ronin, and other manning the controls. The runner wore an Atlas rig to move the weight from his arms to his back. A SmallHD DP4 was the on Ronin monitor and loop-through to the wireless video transmitter, the Nyrius Pro. The operator had a SmallHD AC-7 and DJI's controls zip-tied together; making it easy for him to be on the move. The camera details: Sony FS-700, 16mm f/2.8 lens, 16-50mm lens, Frame-rates: 120 and 240.

In this situation and at these frame-rates the Ronin rocked it. The combination made for nice smooth, and immersive, shots. The Atlas rig made it much easier to run with the kids. There is a steep learning curve with the Ronin as well as the Movi. One needs to learn how best to utilize these powerful pieces of equipment. 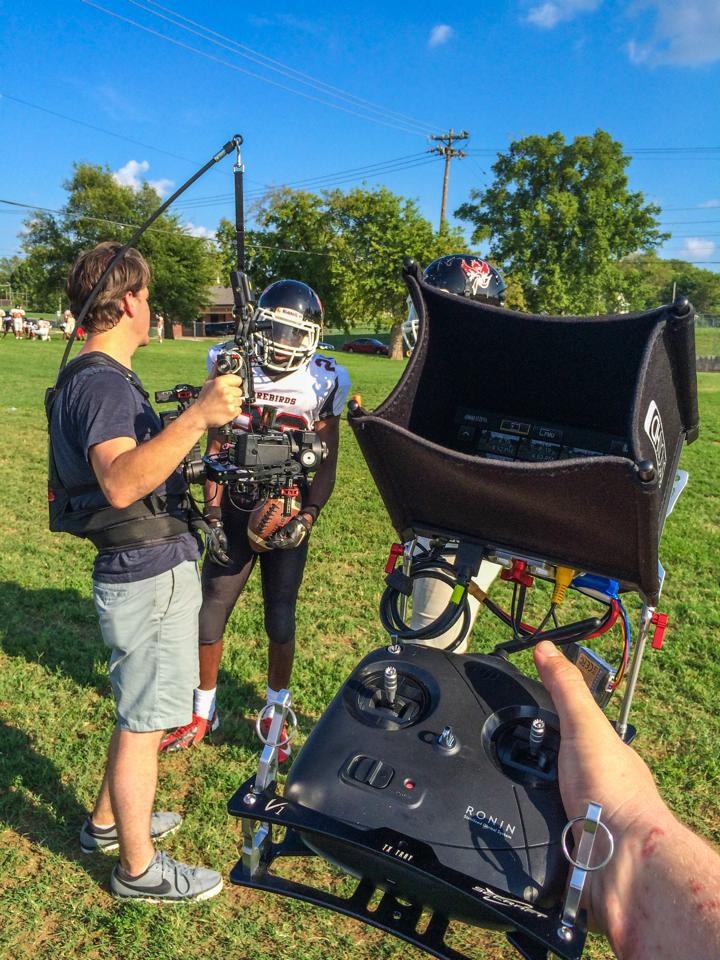 The battery lasted longer than we thought it would. Two days later we had another shoot with the Ronin. That shoot lasted three hours and the battery was only half spent. Again, the Atlas rig saved us from blowing out our arms and shoulders. If you're not using a rig the Ronin gets heavy fast; I mean real fast. The Ronin performed as expected, easy set-up, smooth shoots, and rugged. The large carbon fiber rails make it a beast and help to take away any torque introduced from an operator.

Lets be honest for a second. The Ronin is not as tool-less as they advertise. It comes with a small tool kit. One might be able to get away without using the tools if only smaller cameras are used or a Red, where the connections are located on the rear of the camera. For the 5D Mark 3, and an HDMI cable, we needed to pull out the tools and shimmy a few things around to ensure our cable did not get in the way. I fully expect, when using bigger cameras, operators will need more adjustment and that is why the tools are included. In our case, an angled HDMI cable would make life easier for us.

This is a nice feature. I like clean cord free rigs, and the addition of a power distribution box under the camera is very nice. However, if anyone knows what the 500mAH full size USB connector is used for… speak up. We are still scratching our heads over a power connection with barely any power going through it. There is enough power in the P-Taps to juice the Blackmagic Cinema Camera and the Production Camera. The power distribution box might not have the full strength necessary to power a camera and all its accessories, like follow focus and transmitter, all together. 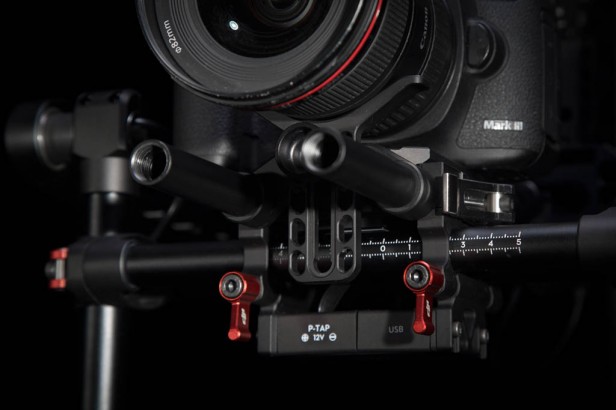 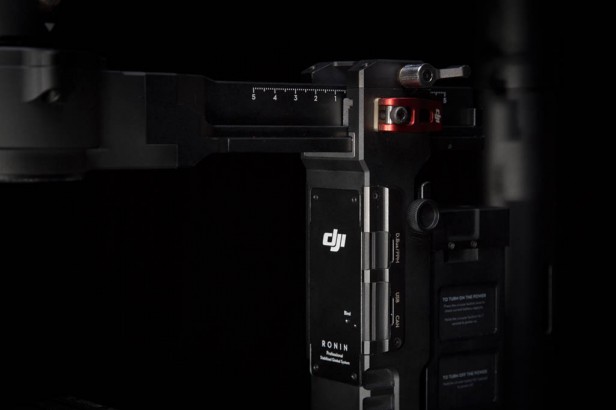 At the time of testing, the app did not have all its features enabled. I am sure the app will be updated quickly and often. Then it will be really useful.

These worked just as advertised.  The “Briefcase” mode is great for low-angle shooting. It is also great when your shoulders need a break. The “Upright” mode is great when higher camera angles are needed. The “Underslung” mode is the more traditional 3-axis gimbal mode you've seen on other systems. For our shoots, we mostly kept in the “Underslung” mode. Transition from one mode to other takes a few minutes, but once the software is aware of the change it kicks in pretty quickly. 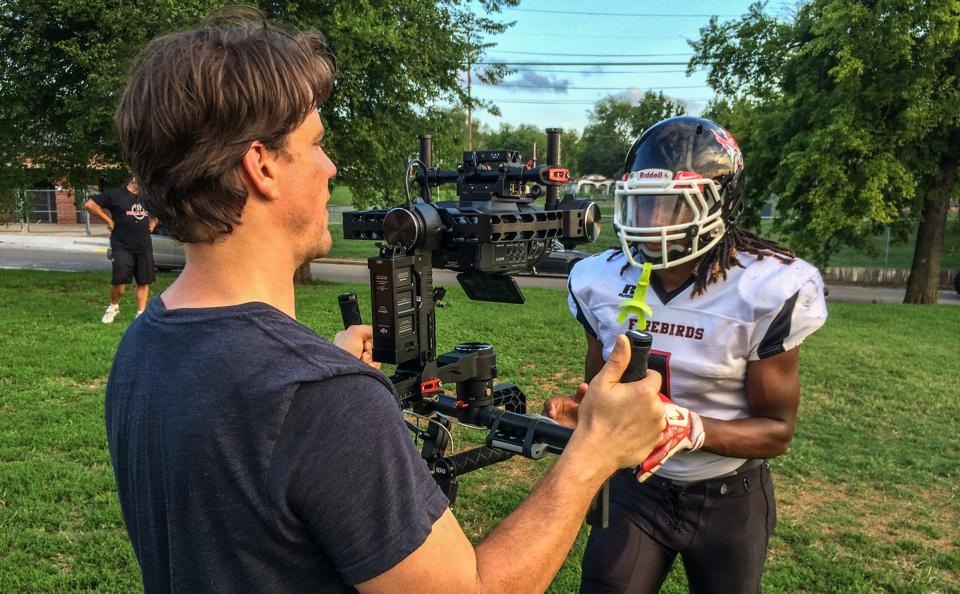 The Ronin worked well in single operator mode and just as well with dual operators. The pan and tilt in single operation takes a little getting used to, but once you got it down it becomes second nature.  Having two operators is really where the Ronin shines. When the rig is weighed down with a camera, lens, monitor, transmitter, follow focus, and other weight adding tool a single operator is carrying around quite a bit of weight. It can be tiring and when I am getting tired I find it difficult to come up with shots on the fly. Then as I got tired I found it difficult to focus on my moves as I framed up a shot. Sharing the workload makes all of this much easier. If anything, dual operation translates into better framing, longer shoot times, and a better video.

Bam! The camera had just spun 90 degrees on its mount and the Ronin? Both of us looked at each other with the “Oh Shit!” look. The camera and the Ronin had just taken a direct hit from a football player's arm while he made a tackle. Quickly we stepped out of the way to assess the damage. We spun the camera back to center and gave it the once over. No damage at all. Then we checked the Ronin. No damage at all. The Ronin even kept the camera balanced. To be sure, we cycled the power; the camera and Ronin were back to normal. The ruggedness of the Ronin, with its large carbon fiber rails, held together. The software balancing the camera worked better than expected. We were back to shooting. The Ronin had just pasted the “Oh Shit” test with flying colors. For the few shortcomings, this is a great investment: it works well, holds weight up to 16 pounds, is rugged, and is quick to set-up. Once DJI has batteries to buy and the app fully up and running this might just be the 3-axis gimbal to buy.

A shout out to Matt Barker of Blackhawk Cinema for giving me an opportunity to take the DJI Ronin out for a few shoots. If you are looking to rent the Ronin, drop a line to Blackhawk Cinema. These guys are fantastic and always come away with beautiful footage. You can find them here: http://blackhawkcinema.com/