Rabbit Ears Audio is a boutique sound effects library founded by broadcast engineer Michael Raphael about four years ago. Raphael’s vision for Rabbit Ears has always been to build comprehensive collections of SFX that will fit sound designers’ very specific needs: for example, he has a meticulously thorough collection of rocket sounds, antique engines, hydrophonic sounds, and many others. Recently, Raphael and his team of field recordists took several Sennheiser microphones out to record a Mi-24 Hind – a rare Cold War-era Russian combat helicopter that requires over 26,000 pounds of air pressure to lift off. 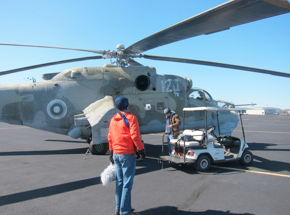 “To my knowledge, there are only a few of these helicopters in the country,” says Raphael. “So when I had the opportunity to record one, I jumped on it.” There were several chal-lenges his team had to overcome in the process: extremely high sound pressure levels, ex-treme wind and very high fuel costs, to name just a few. He and his team of three other field recordists came armed with several specialized tools for the job, including the Sennheiser MKH 8020, MKH 8040, MKH 8050, MKH 8060 and older models including the MKH 30 and 40, which were used in a Mid-Side (M/S) arrangement inside a zeppelin wind shield.

“One of the reasons I used the Sennheiser MKH 8000 series was because of its extended frequency response – particularly in the lower range,” Raphael says. “We wanted to capture the low-end chop of the rotor blade, as well as the sheer size of the helicopter on pass-bys.” In this application, he found the MKH 8020 and MKH 8050 to be perfectly suited; the MKH 8020 accurately captured the low frequencies generated by the five giant helicopter blades, while the MKH 8050 was ideal for capturing the whirring of the rotor as it spun around. 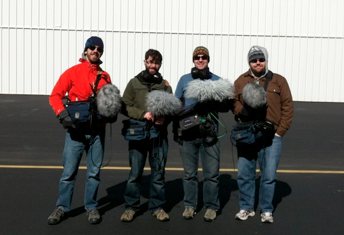 “One of my concerns was whether or not the mics would hold up,” Raphael says. “I found that the 8000 series performed incredibly well in really extreme situations; in fact, there were situations where each of us were literally knocked to the ground at least once or twice during the takes just from the pressure of the pass bys. During take off, we were just outside the rotor arc, no more than 10 feet away.”

Extreme wind and sound pressure were not the only challenges. “They went through over $8,000 worth of fuel in a single day, so we had to be confident in our mic choices and just go with them,” Raphael recalls. His team recorded into 7-series Sound Devices recorders with extremely low gain settings with no padding. All the mics were in zeppelins, and used wind protection from Rycote. 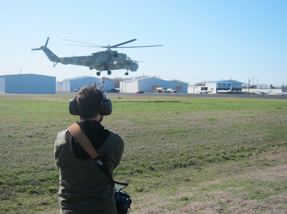 Though these recordings represent Raphael’s first experience with the Sennheiser MKH 8000 series, he believes that these mics will make a worthy addition to any field recordist’s toolkit: “I’ve been very pleased with their all around performance and they gave us a really nice balance. You can’t get much quieter than those mics; they have a fantastic extended frequency response.” Rabbit Ears’ Mi-24 HIND collection will be available soon directly through its website, www.rabbitearsaudio.com.

Sennheiser is a world-leading manufacturer of microphones, headphones and wireless transmission systems. Established in 1945 in Wedemark, Germany, Sennheiser is now a global brand represented in 60 countries around the world with U.S. headquarters in Old Lyme, Connecticut. Sennheiser’s pioneering excellence in technology has rewarded the company with numerous awards and accolades including an Emmy, a Grammy, and the Scientific and Engineering Award of the Academy of Motion Picture Arts and Sciences.

You can find all the latest information on Sennheiser by visiting our website at http://www.sennheiserusa.com.