I started at the bottom and showed people that I that I knew nothing but I’d learn quickly. That was all it took

It feels like it’s tougher than ever to break into and make a living in this industry. Would you say that’s the case?

It’s getting harder to make a living, sure. There’s a huge influx of people who own their own gear and are at a point in life where they don’t need to make much money to get by. That drives prices down for everyone, including those with a lot of experience.

Also, their friends are landing in positions where they can hire those same people, and they don’t necessarily understand why it might be good to hire someone with more experience. I’ve been in several situations where I’m hired by “young” companies who allocate a LOT of time to shoot what needs to be shot, and they’re blown away by how fast my crew and get in, do the job, and get out again. They’re used to working with people who have less experience and who might cost less but they take a lot more time and do less polished work. 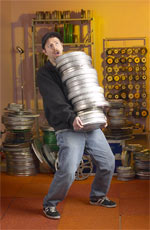 What I’d tell someone who starts a job as a camera PA–tomorrow!

It’s so easy to buy gear, but no one is working their way up anymore. They buy a camera and immediately market themselves as a cinematographer. I see a lot of rookie “cinematography” reels that consist of a lot of handheld natural light photography with a heavy and overdramatic grade applied. The problem is… the reason I see so much of that stuff is because ANYONE can do it. And if anyone can do it, why would a producer pay much money for something they can get from anyone? Why should they hire you if you’re only competing on price and there’s always someone cheaper? You’re only worth something if you can walk into a situation—with lights, without lights, interior, exterior, day, night—and know what to do to create consistently pretty images that serve the story. Natural light is rarely the answer. (In fact, natural light rarely looks that great. If that’s what you need to make pretty pictures you’re going to spend more time looking for nicely lit locations rather than looking for the perfect location that you can then light.)

There’s a hundred years of film history that have gotten us where we are. That’s a hundred years of visual experimentation along with building a huge library of timesaving techniques and visual tricks to capture the kinds of images that we envision when we start a project. Without at least a few years of onset experience you have to try to replicate all that experience and knowledge from scratch. You’re starting at zero. You might as well be one of the first silent film camera people, standing in a field with a hand-cranked camera and wondering what to do next.

There’s always room for skill. Skill only comes with experience. You wouldn’t buy yourself a scalpel and call yourself a brain surgeon, so why would you buy a camera and call yourself a cinematographer? The biggest part of cinematography is learning how to go into a job and deliver the right look every single time, so matter the story or situation. That’s not a skill that comes out of a camera manual. It’s best learned by watching how other people solve problems. Over time you’ll learn enough that you can come up with your own style of solving some of those same problems, as well as solving new problems on your own.

When I started out I was told that it was impossible to break into Hollywood. I discovered that it wasn’t: I just had to be driven, willing to learn, trainable, competent and able to work well with others. I also had to admit that, even after four years of film school, I didn’t know anything that would help me survive a day on a film set. I knew a lot that would help me creatively later in my career, but I didn’t know the first thing about showing up for work and not getting fired. I started at the bottom and showed people that I that I knew nothing but I’d learn quickly. That was all it took.

The Fine Art of Negotiating

The biggest lesson I had to learn is that you are worth what you charge. There are jobs that I haven’t gotten because I charged too much, but others that I lost because I charged too little. You have to value yourself according to your skill level. At the same time, you have to remain within an acceptable range. The more people who work for less money the worse off we all are. I remember hearing about a classmate at film school who got a job for $100/day and thinking, “Wow, making that much money would be just fine with me.” Now I could make that much money every day for a month and never pay all my bills. Don’t cut your throat by underbidding everyone else, because the rate that you set will be the new standard against which you compete in the future.