These are the tricks…

When traveling with gear, do you pack everything or have someone else do it? How often have you gotten burned by letting someone who end up being unqualified pack the gear?

I make my camera assistants pack gear. I don’t like to get involved in that anymore. I have people for that. 🙂

In the old days I managed to burn myself on one or two occasions. One company sent me to shoot in another state without a lens cap for the camera. We packed the wheels for the camera case inside the case, and on the flight one of them got out of its pocket and gave the front element of the lens a good nick. I managed to work around it, but I was unhappy about telling the client that their lens had been damaged on my shoot.

“Why didn’t you take a lens cap?” they asked.

“There’s none with the camera,” I said, “and the person who checked out the gear didn’t know where it was.”

“That’s because they’re all right here, dummy,” they said, opening up a drawer FULL of lens caps.

Okay… why are they in a DRAWER and not on the lens??? 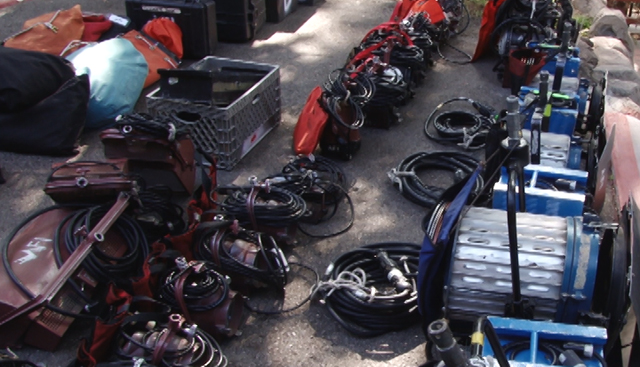 The other tricks I remember are:

Always remove light bulbs from lamps before shipping. They’re less likely to break if they are packed on their own.

Always set a lens’s focus to infinity and the aperture to wide open. In fact, camera assistants generally do this every time a lens goes back in the case. There are several reasons for this:

Those are the tricks. Set mechanical equipment such that its own internal settings make it most stable. Make sure glass can move on its own without being attached to a more massive object that will shake it more aggressively if attached. And make sure nothing can get out of its pocket in the case and move around on its own.

So You Want to Work with Cameras