This reader Quicktip was sent to us by John Flanagen and it borrows the idea of a star-rating system on the Macintosh as a way to rate footage in your NLE. John uses this in Final Cut Pro X but you could utilize it in most any application that supports Special Characters.

Stars can be a nice, visual way to categorize anything from photos to video. ★ might be the worst footage or at least the use if there’s nothing else up to ★★★★★ for the best. Let’s see how John has implemented this:

I just discovered this today so I’m pretty excited about it. If you are more visual or are familiar with Lightroom’s star rating system and coming from a photo background you can use star ratings with keyword collections.
Use Edit >  Special Characters to open custom characters panel. Name collections with the stars. Assign shortcuts to these star ratings and you have created a star based rating system in FCPX.

Indeed FCPX’s way of keywording footage does make a star system like this make the most sense but you could create sub clipping bins in Adobe Premiere Pro a and assign star ratings to them.

As mentioned above the Edit > Special Characters menu is where to get access to the stars (as well as many other characters) but in Adobe Premiere Pro CC that menu is gone so you have to turn it on in the System Preferences > Keyboard > Show Keyboard & Character Viewers in menu bar. That will bring up the character viewer in the menubar. 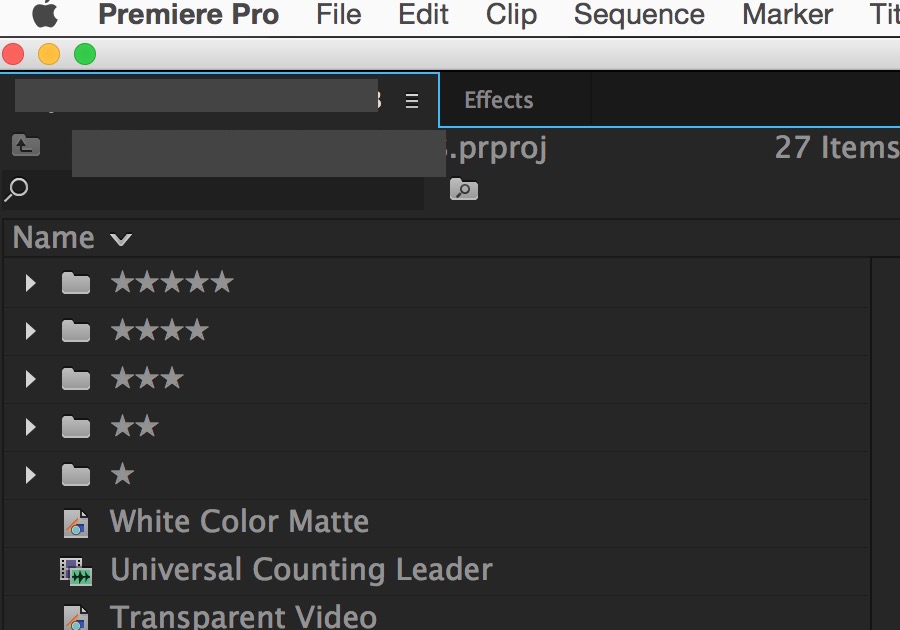 But this just doesn’t work in Avid Media Composer as it gives the bins ???? instead of ★s. But you could use asterisks I suppose it just doesn’t look at pretty.

Those stars show up as question marks in an Avid Media Composer bin.

Or you can use all those pretty little special character icons to do what this FCPX editor does:

Shots that we love, shots that are shit.