Today’s a bit of a different quicktip. It’s about communication. 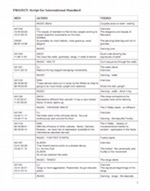 Today’s Quicktip is a user quicktip that comes to us from Jay Doyle. It’s not a tech tip but rather a suggestion and a bit of advice about that script you may have just gotten in your edit suite.

I’m sure many editors would agree that a script if often a luxury. We are all often handed a hard drive full of media, given a general direction, and told to call when you have a cut. While this can be a very freeing and creative way to work it’s also potentially asking for trouble as an editor needs some kind of guidelines when cutting projects for other people.

The best guideline is a script. That script may or may not be detailed enough to include a paper-edit with timecode notes but even if it is more of an outline it’s that specific structure than can be just what an editor needs as a jumping off point to really dive into the edit.

With that we’ve got a rather simple quicktip from Jay Doyle that might save some time in an edit and/or help facilitate a better session overall.

Some scripts are sacred; others are just suggestion. Talk with your producer to find out how she/he views the script you’re working from.

That’s good advice especially if you’re working with a producer/director for the first time. The producer may see an in-depth paper edit as a pretty tight script already and they may want to see that on the screen before the editor deviates from the script.

There are often many things that don’t work once the interviews, talking heads and sound bites are strung together into a cut that may have read just fine on paper (often a good script is written from a transcript). The producer might need to see that the way the subject delivered the content just didn’t work in context of everything around it before they are willing to give up a much loved sound bite. They also may need to hear all of their sound bites strung out in a radio-edit (as in just hearing everything back to back without even seeing the images) to realize that something doesn’t work.

Per Jay’s tip it is a good idea to talk the script out a bit before diving into the cut to see how the producer/director views their script. You may gain some valuable insight into what they were thinking as they constructed the story that isn’t always apparent just from reading the script.

In other words, communication is important. That’s a tip true for most anything.