Rapidly becoming a reference in the NLE market, BlackMagic’s DaVinci Resolve new version, 14, is now shipping, with 10x better performance, hundreds of new features and more, in a free NLE. 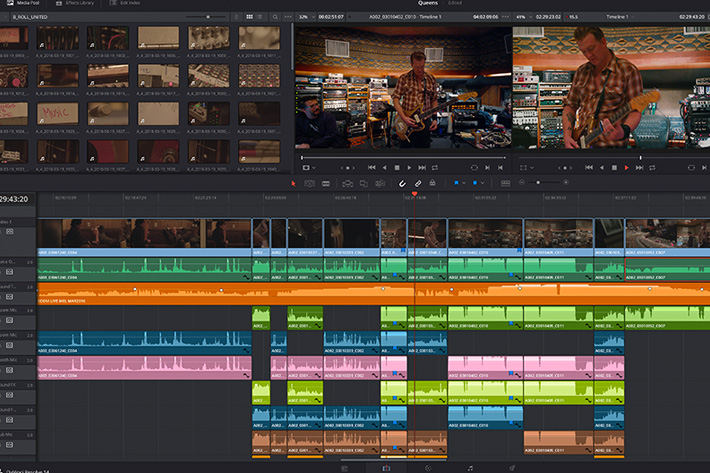 Blackmagic Design announced that the final release of DaVinci Resolve 14, its professional editing, color correction and digital audio software, is now available for download from the company’s website.

According to Blackmagic Design, DaVinci Resolve 14 is the biggest release in the history of the product, and has been designed to be a complete revolution in post production. DaVinci Resolve 14 is, continues Blackmagic Design, “the world’s only fully integrated professional editing, color correction and audio solution. It scales from a single user all the way up to the largest collaborative studio workflows.”

New features include up to 10 times performance improvement, a whole new audio post production suite with Fairlight audio built in, and multi user collaboration tools that let multiple people edit, color and mix audio from multiple systems, all in the same project at the same time. In addition, DaVinci Resolve 14 includes hundreds of new features for editors and colorists, including over 20 new effects such as automatic facial recognition and tracking so customers can quickly refine and enhance faces in their shots. 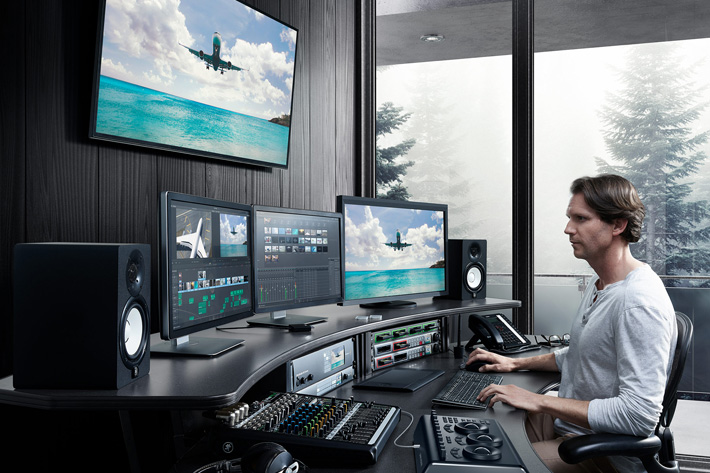 DaVinci Resolve 14 is like 3 high end applications in one. Customers get professional editing, color correction and new Fairlight audio tools. All it takes is a single click to switch between editing, color and audio. For multi user studios, DaVinci Resolve 14 Studio features bin and timeline locking, secure chat, a graphical timeline comparison tool for accepting and merging changes, and more. These features dramatically change post production from a linear to a parallel workflow. Customers no longer have to import, export, translate or conform projects. Everyone can work on the same project at the same time.

“DaVinci Resolve 14 is the first NLE that offers me all of the professional tools I need in one app,” said Eric Wilson, Editor of the hit television show NCIS: LA. “The combination of editing, color correction, effects and high end audio, along with 4K multi format support and all of the new collaboration tools, is exciting and innovative. It’s going to be a game changer.”

“The public beta of DaVinci Resolve 14 has been downloaded more than any other version of the software in its history,” said Grant Petty, CEO, Blackmagic Design. “This new version is a major leap forward because it now gives every customer, from individual users to large studios, a way to seamlessly move between editing, grading, and audio. That means they can spend more time being creative and less time translating projects and switching between multiple applications!”

The free version of DaVinci Resolve 14, which includes more features than most paid software applications, is available for download from the Blackmagic Design website.

No Cloud for DaVinci Resolve 14

DaVinci Resolve 14 runs on all major platforms, including Mac, Windows and Linux, making it easy to integrate with existing systems and workflows. Customers running Red Hat or CentOS Linux can even build their own workstations using low cost motherboards, extremely fast processors, massive amounts of RAM and up to 8 GPUs for incredible real time performance.

Keep reading through the detailed overview provided by Blackmagic Design if you want to know more about DaVinci Resolve 14. A good idea is to start download of the software and read the following notes while waiting.

DaVinci Resolve 14 features a new high performance playback engine that’s up to 10 times faster than before.

In addition to extensive CPU and GPU optimizations, customers also get better threading and GPU pipelining, lower latency, much faster UI refresh rates, support for Apple Metal and much more. This makes DaVinci Resolve 14 faster and more responsive than ever so customers get incredibly fluid performance and more precise editing, even on long timelines with thousands of clips. Scrubbing and playback are instantaneous and there is powerful new acceleration for processor intensive formats like H.264, making it possible to edit 4K images on a laptop.

Legendary Fairlight audio is now fully built into the DaVinci Resolve 14 application itself. Fairlight is famous for being used at the world’s highest end studios for audio post on film and television. Fairlight is known for both its superior sound quality and its speed. Customers get a massive set of professional audio tools for recording, editing and sweetening, professional bussing, mixing and routing, and multi format mastering to 3D audio formats such as 5.1, 7.1, Dolby and even 22.2. The state of the art, super low latency audio engine is designed to work with 192kHz 24-bit audio with real time EQ, dynamics processing and plug-ins on every track when used with the Fairlight Audio Accelerator. Plus the new Fairlight audio can record up to 96 channels while simultaneously playing back up to 150 audio channels, while mixing it all in real time! There simply is no other software available with this level of dedicated audio power.

The new Fairlight audio in DaVinci Resolve 14 supports up to 1,000 tracks and features subframe editing of audio, down to the sample level. The mixer is designed to let customers create sophisticated sequences and has several main, sub and aux buses for mastering and delivering to multiple formats at the same time. Every channel on the mixer features real time 6 band parametric EQ, along with expander/gate, compressor and limiter dynamics. Clip time warping lets customers stretch or compress audio without shifting pitch. In addition, every single parameter can be automated, even VST plug ins, using a variety of automation modes.

In addition to audio editing, sweetening, and mixing, Fairlight audio in DaVinci Resolve 14 also includes multi channel recording tools that are far superior to those found in most editing systems. Customers can record voice overs or even an entire symphony orchestra while also monitoring video and multiple channels of dialog and sound effects. The advanced monitoring can handle buses up to 24 channels wide with customizable fold-up and fold-down for crossing between formats. Monitoring can be done on up to 16 different sets of speakers, including massive cinematic installations.

DaVinci Resolve 14 works with the Fairlight Audio Accelerator card, which gives customers 100’s of zero latency tracks and real time effects processing for EQ, dynamics, and up to 6 VST plug ins per channel. Even without the accelerator, most modern computers can still process more than 60 tracks in real time. In addition, DaVinci Resolve 14 can also be used to drive the entire line of Fairlight hardware mixing consoles, which makes working on complex multi track projects faster than any other system available.

All this editing, color correction and audio post production power also means multiple people need to work on the same job, at the same time. This is where the revolutionary new collaboration tools are vital to the dream of revolutionizing post production. The new collaboration tools completely redefine post production workflows by supporting simultaneous editing, color correction and audio post. Assistant editors can prepare footage while editors cut the picture, colorists grade the shots, and sound editors mix and finish audio, all in the same project at the same time.

New bin, clip and timeline locking lets users safely work on a specific part of the project without overwriting each other. There’s also a built in secure chat client that lets team members talk to each other from within DaVinci Resolve without the need for an external internet connection. This secure chat is vital because most high end facilities are unable to use services such as Slack or Skype for messaging because they need to remain completely disconnected from the internet to ensure security against hacking.

The new timeline comparison tool makes it fast and easy to see differences and merge changes between two timelines by viewing a side by side comparison of every single change made between users. Best of all, DaVinci Resolve 14 works with the storage you already have. There’s no need to buy expensive or proprietary storage and servers to work collaboratively.

The new multi user features of DaVinci Resolve 14 eliminate the need for importing, exporting, translating and conforming projects. Customers no longer have to wait for a locked edit before starting color and audio work. Switching between editing, color and audio is just a single click away. That means picture editors, colorists, and sound editors can all work in parallel, making DaVinci Resolve 14 the fastest way to edit, grade, mix and deliver projects. 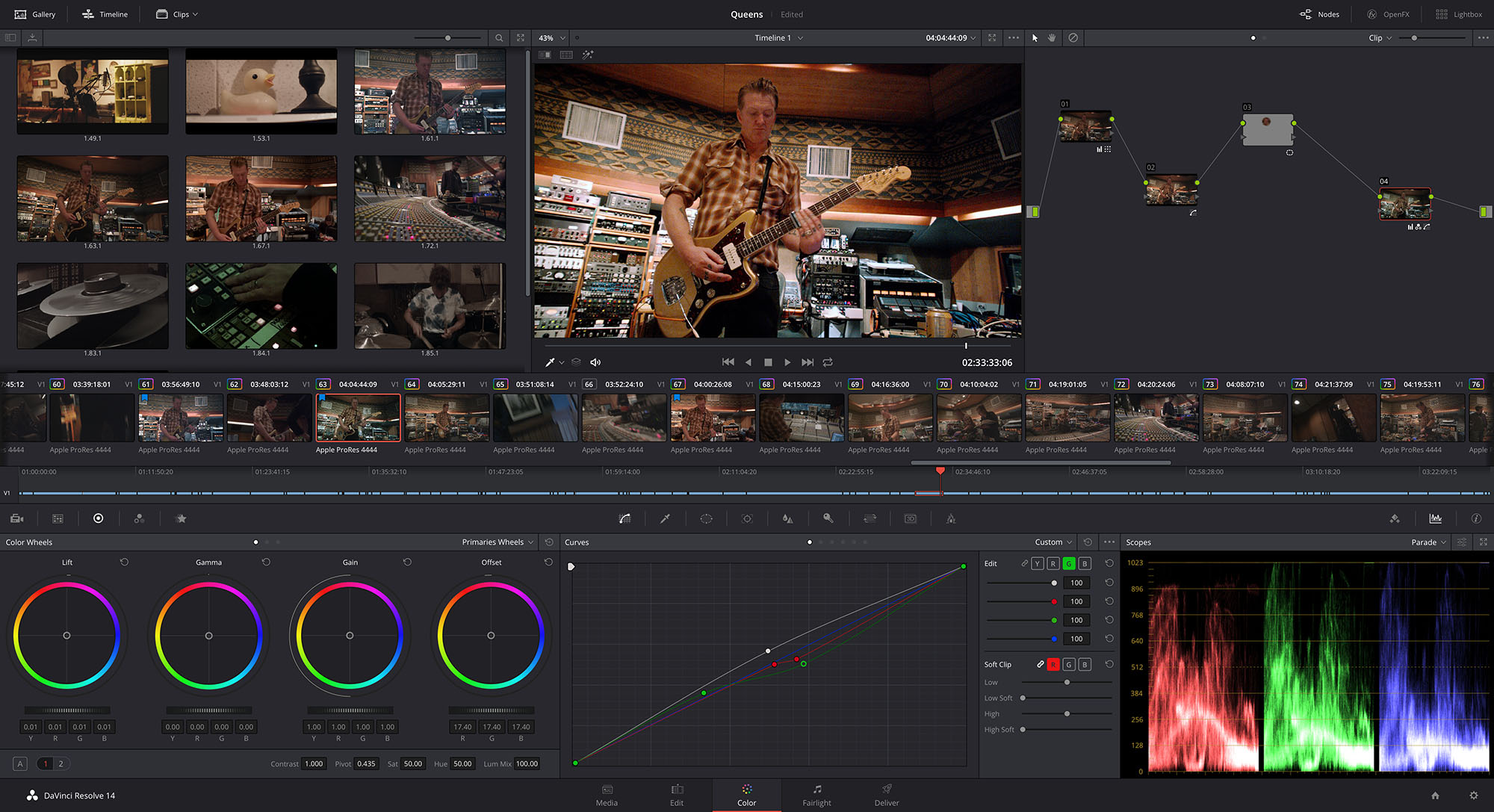 In addition to the incredible performance improvements, editors also get new slip and slide trim commands that make it easier to dynamically trim live on the fly during playback. They can now save interface layout presets, view multiple bins at once and open multiple bin windows. New marker overlays, audio only and video only edit tools, track colors, and subframe audio editing make it the world’s most powerful creative editor.

Customers can add a DaVinci Resolve Micro Panel, DaVinci Resolve Mini Panel or a DaVinci Resolve Advanced Control panel for the ultimate high speed workflow. All controls are logically placed near natural hand positions and are made out of the highest quality materials. Smooth, high resolution weighted trackballs and precision engineered knobs and dials feature the perfect amount of resistance for accurately adjusting any setting. The DaVinci Resolve control panels give colorists and editors fluid, hands on control over multiple parameters at the same time, allowing them to create looks that are simply impossible with a standard mouse.