Pixel Corps’ John Riley and HS-2000 in action at a Fashion Show in Sonoma, California. While it’s effective in many venues, this is the kind of stuff it was built for (you’re seeing a reflection of corrugated steel in the monitor, by the way).

The Datavideo HS-2000 is an all-in-one HD-SDI mixer that includes audio, video, intercom for 6, and monitor… all in a simple briefcase like form factor. It’s designed for remote mixing of HD (720p or 1080i) venues. It should be noted, that this is not a review of a loaner product. We purchased an HS-2000 a few months ago and use it nearly every week and have used it now on 3 continents, indoors… and outdoors.

HS-2000 sports four SDI inputs (one doubles as a DVI input) as well as a dedicated DVI input. For our purposes, this is been completely sufficient for on-location and remote switching. The system has many of the attributes that you would normally expect with a video mixer. There is a fader bar, lots of buttons for wipes (that you should never use), Picture-in-Picture, Take and Cut, and 4 channel audio mixer. You can use the DVI signal to feed graphics in and use a luminance keyer to overlay with the video (we’ve actually found Apple’s “Keynote” to be very effective for this process).

There is also an intercom and tally system built right into the box, seamlessly. Having an intercom system built-in and not an extra piece of equipment can be very, very useful… especially combined with the tally relays to all the cameras (that switch automatically as you edit… yellow tallys for Preview and Red for Live). If you haven’t done a lot of mixing, it should be pointed out that having a solid tally and intercom system is an absolute necessity for mixing a tight live event. You will need this system included, it’s great to have it built in without tons of extra wires connecting the relays to the mixer (just wires to the tally/headsets). The HS-2000 comes with 6 headsets and tallies.

The monitor is actually built into the case too. This provides the standard display of preview and program as well as all the independent feeds connected to the mixer. You can also go full screen on the Preview or Program for confidence checks. Of course, you could buy a mixer and simply connect it to any old monitor that you have but if you’re trying to shoot at a remote location and set up quickly… having all of these pieces put together turns out to be very useful.

Outputs are exactly what you’d expect – HD-SDI (2), component HD and DVI for Preview. The system runs another 720p or 1080i. It is not capable of working in standard definition or scaling to standard definition. While this is not a large concern of ours if you’re trying to integrate with older cameras this may become an issue.

The strongest feature of this mixer is its portability. You can set this mixer down at a location and have it connected all the cameras and other inputs in less than 15 minutes. Everything you need for a basic mix is all built-in and you are not carrying around a lot of cables and do not have worry about a lot of extraneous connections. The mixer is well-built and feels solid. This is very important when you’re working with larger clients but on a smaller budget. Our experience of this mixer is that it is a solid and reliable appliance that delivers exactly what it promises.

There are, of course, a few things that we would love to see improved in the next iteration of the HS-2000. First, the audio is not embedded into the SDI output. This could be considered a subjective complaint. There are good reasons not to embed the audio into the SDI feed. Oftentimes, the audio will get ahead of the video as the video passes through hardware appliances. This requires a variable audio delay to re-sync the audio with the video. This is often done downstream of the video mixer. Many mixers in this class don’t even deal with audio at all. That said, it generally requires another piece of hardware in the workflow and makes the mixer slightly less portable. Second, we would really like to see a key/fill option for graphic overlays. A key/fill uses two SDI input streams- one carrying the color information and the second carrying the alpha channel. This combination allows for much cleaner transparencies and soft edges than a straight Lumakey. The workaround is generally to key video downstream. The problem with this is that you are putting a computer and software between the mixer and the final output. This is a less stable approach than feeding the graphics into the mixer. In defense of the Lumakey option, many times you won’t want to give up precious inputs for a key and fill (2 inputs just for graphics), you also need a more beefy system to send the graphics to the mixer (Dual SDI outputs) which makes remotes more cumbersome. That said, it would be a great choice to have.

Finally, the unit is slightly larger than the regulation size for carry-on luggage. This may seem like a small detail but this is a portable mixing unit and we take it all over the world. We have thus far been able to talk her way onto the plane with the mixer but if a few inches for shaved off to the width we wouldn’t have to worry about it. 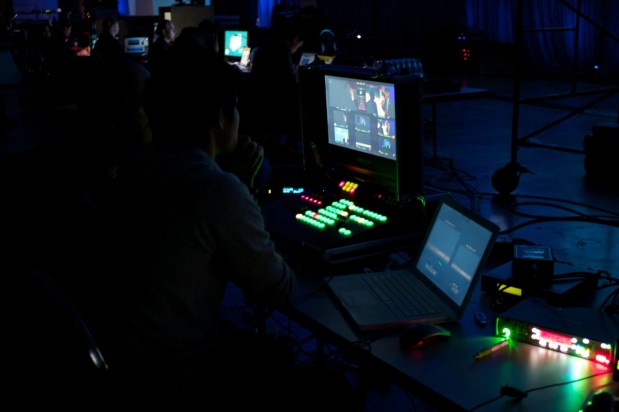 While there are many mixers that have lots of little features that we wish we had in this mixer, we simply haven’t found another all-in-one mixer, at this price point, that matches the feature set or stability of the HS-2000. We have found it to be a solid mixer that we can trust to get the job done while also being very portable and very convenient in the field. If you are looking for a system that allows you to set up extremely quickly and feel confident in the final result, HS-2000 is definitely worth checking out.