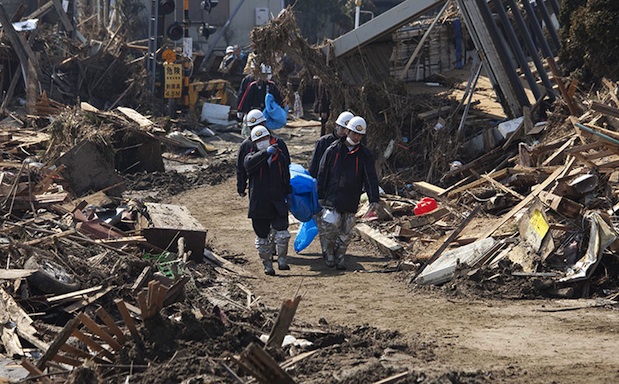 In this new column, I will cover stories and reports that deal with the new reality that we as shooters face while working with new groundbreaking technology like DSLR cameras. I will focus especially on the shifts that go through the industry, new opportunities, new competition and what that means for old habits. To find out more about my own work, please check out my blog at www.ninofilm.net/blog.

We have all been following the unfolding tragedy that has hit Japan about two weeks ago – first an earthquake of unprecedented power, followed by a devastating tsunami that left much of Japan’s shores absolutely destroyed, thousands dead and hundreds of thousands homeless. And if that wasn’t enough, the danger of a nuclear catastrophe looms as the Fukushima power plant – positioned directly at the shore – was destroyed, exposing radiating fuel rods to the atmosphere. That country has been beaten hard from all sides within only a couple of days. 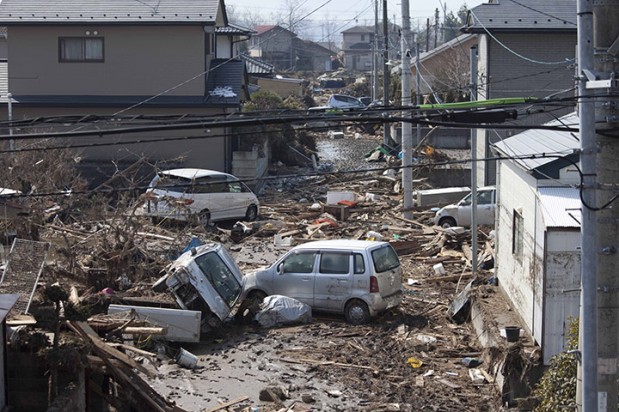 Philip Bloom has started a fundraiser on his blog to help victims of the Japanese earthquake – I beg and urge you to take part and chip in a little money. As a by-product of being super-awesome by helping people, you can win great prices (for example equipment from Kessler Crane worth $2.000!) – so there’s really no reason not to take part, every little donation counts.

In such times of crisis, the UK newspaper The Guardian often seems to fall back on one particular member of their photo journalists, Dan Chung, and send him right in the middle of it all. For example, they sent him right there after the Arizona shootings a while back, he also went to North Korea when Kim Jong Il introduced his son during a military parade, and so on – he practically seems to be the fire brigade of the DSLR journalist world.

He is also a pioneer as a video shooter, because he was one of the first people in the news crowd to use DSLRs in news-type environments, which is a particularly hard thing to do. His blog is a great resource that I look at regularly, be sure to check it out too. I am about to finish my review on his great tutorial “Dan Chung – Video on Assignment” that he did with the F-Stop Academy, where I will talk much more about his way of working.

Anyway, he was sent to Japan by The Guardian the day after it was hit by the devastating earthquake and tsunami, and as usual, he was assigned to shoot both stills and video of the area. The video and photos he shot for the newspaper were posted on their website, check out the video right here:

As you can see, still quite unusual for news footage, he used a slider to add depth to the shots of the completely wrecked landscape.

However, he also used his little spare time to do a more personal edit, adding music to the shots – then he posted this version on Vimeo:

Reactions to the video were numerous and quite controversial. By adding both music and slider shots to the video, it seemed to many that he somehow romanticized a tragedy that was (and still is) unfolding, where people are still dying and suffering. I think it is respectfully shot, but I also understand the argument that it really challenges what people have become used to regarding news footage presentation.

Check out the comment thread on the video’s Vimeo page to understand what I am talking about.

Here is a screenshot of my comments on Vimeo: 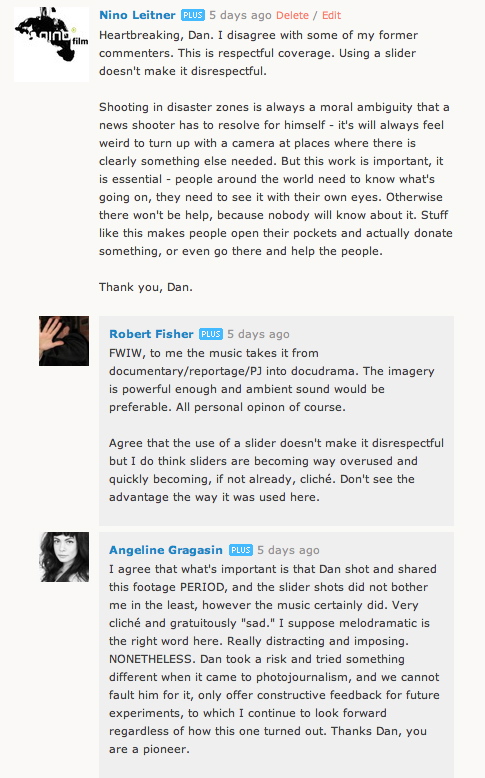 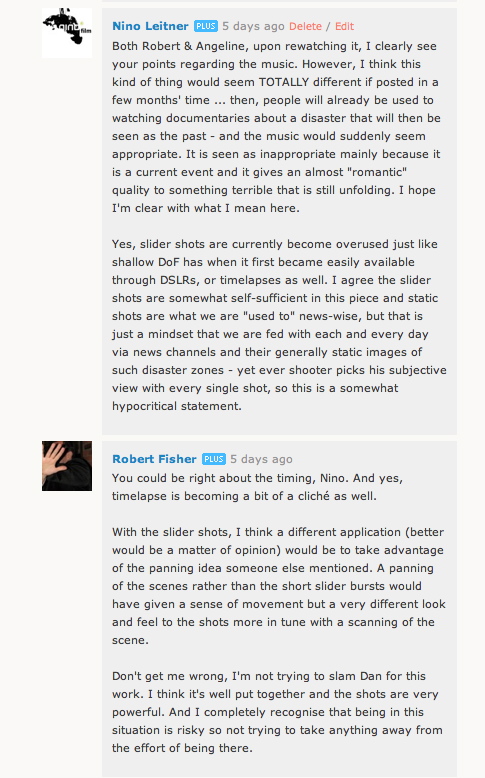 Interestingly – as Angeline Gragasin pointed out to me on Twitter – Laurence Topham, the editor/producer at guardian.co.uk who re-cut Dan’s original version for the Guardian, posted a comment on Dan’s “private edit” too and also adds that adding music was “too much, too soon”: 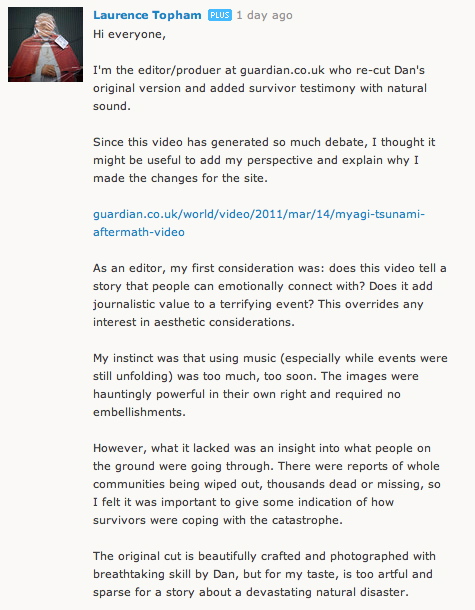 Watch this interesting discussion between Khalid Mohtaseb and Philip Bloom discuss the issues around the use of cinematic techniques in news shooting. Jon Bryant sent it to me after he read this article, and I think it is worth sharing on the matter. It was ironically also shot by Dan Chung, but the two of them cover many of the issues currently being discussed around Dan Chung’s tsunami aftermath video.

There is now a lengthy audio podcast with Dan Chung on David Campbell’s blog, where he goes into great detail about the whole assignment to shoot in the disaster zone.

Here’s a quote from the blog:

In an effort to offer something different, Dan produced a piece of ‘cinematic journalism’ he felt embodied the experience of being in the disaster zone. He discusses his intentions at length in the podcast (from 20:55 to 30:00). This film, which took less than two hours to make, has generated a lot of controversy online, as the comments on Vimeo demonstrate.

Check out the full audio podcast and even more backstory on David Campbell’s blog.

Personally, I’m torn on this entire matter, I can understand either side but I’m not sure if either of which is “right”. It’s really all a matter of perspective, but maybe it indeed is too much, too soon.

What’s your position on this?