Use high speed sync to add mood to your shot. 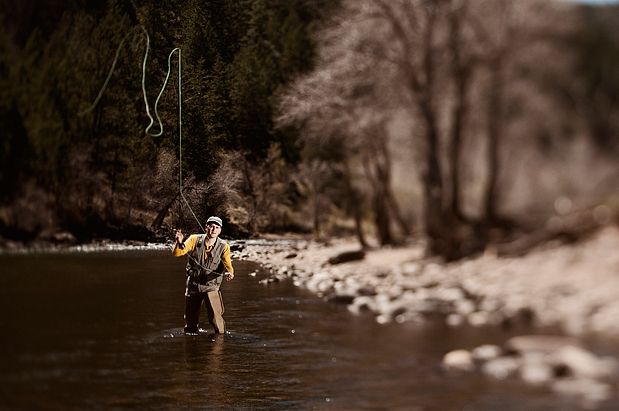 When most people think of high speed sync, they think fast shutter speeds and freezing the action. True, shooting at 1/8000 with flash is going to freeze the action no matter what the main light source is illuminating the subject. But what about other uses of high speed sync and flash. Until the release of the Pocket Wizard Flex system and Hypersync (see my last post), I was often frustrated shooting in bright sun. I needed an aperture of F16 to get the right exposure at 1/200, my fastest sync speed using my Elinchrom Rangers. What if I wanted to use a wide open aperture like F2.8 to get soft focus and blur out the background? The answer is use high speed sync for selective focus shots in bright, sunny conditions. Maybe high speed sync should be called ‘soft focus sync.’

Take the image used here. I was shooting a fly fisherman the other day around noon, and the sun was very bright. To create mood in the image, I decided to use my 45mm PC-E tilt shift lens. This lens allows me to swing the lens plane left or right and really create out of focus areas. I tried the image without flash, but it just didn’t have much pop with available light. I decided the best approach was to add flash, so I set up my Ranger with sports reflector about 40 feet away. To trigger the flash and use high speed sync, I used a Pocket Wizard Flex MiniTT1 and ST4 receiver on the Ranger. Since this allowed me to use any shutter speed I wanted, I was able to shoot at F2.8. I used a shutter speed of 1/8000 and an ISO of 320. Using F2.8 and the tilt shift lens allowed me to throw things way out of focus, and the flash brought some life to the fisherman.