Today on the Slanted Lens, we are shooting out at the old LA Zoo in Griffith Park. It used to be a creepy place, nestled in the overgrown brush about the current LA Zoo. While it has been cleaned up and is open to the public to visit, the creepy factor is still there. We are going to shoot a campy, retro, B-movie image of a mummy chasing some explorers in a cave with only a torch for light. 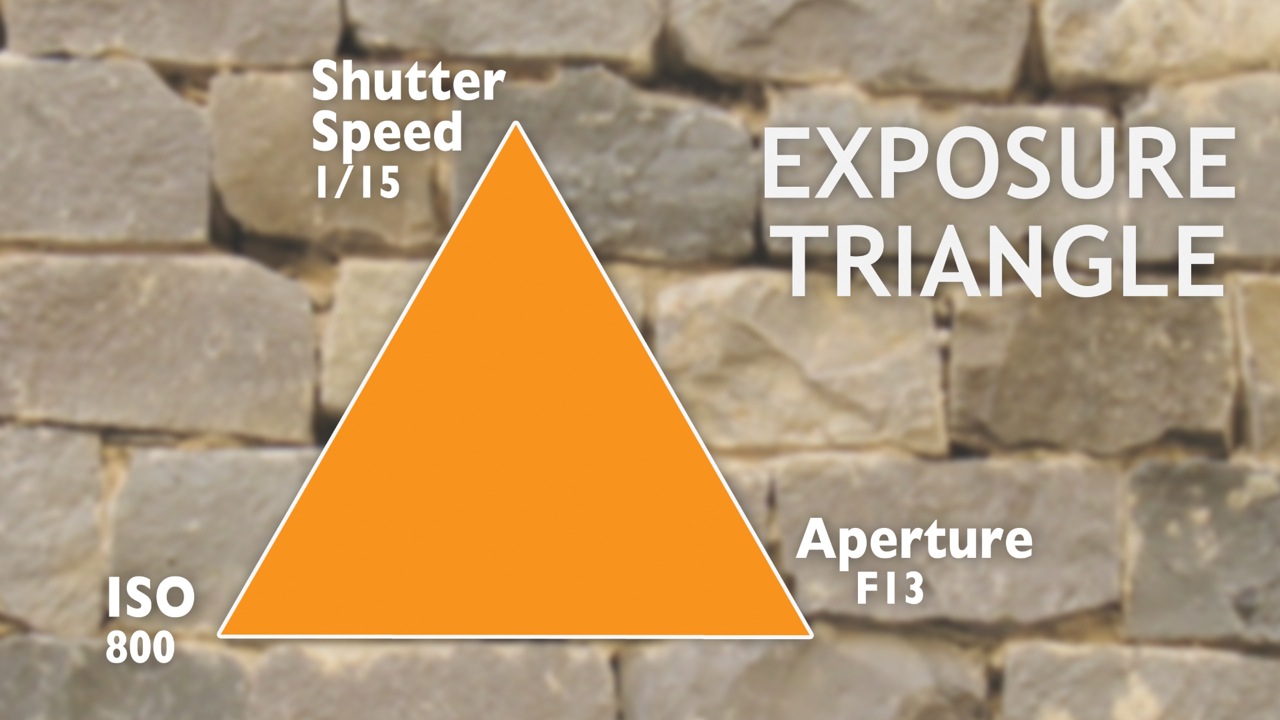 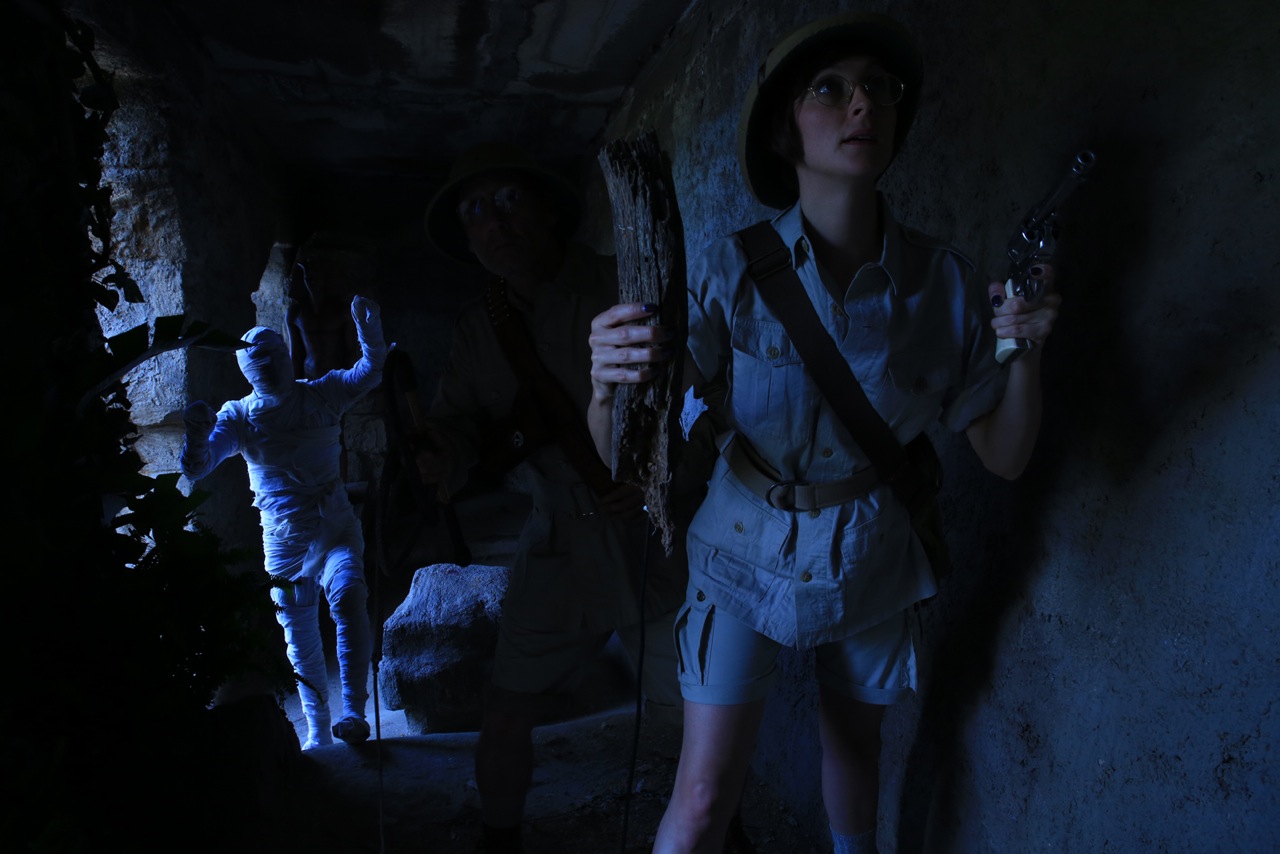 #2 Here is the image with just the ambient light coming in from the cave openings. The outside light goes blue because I have my white balance set to tungsten. 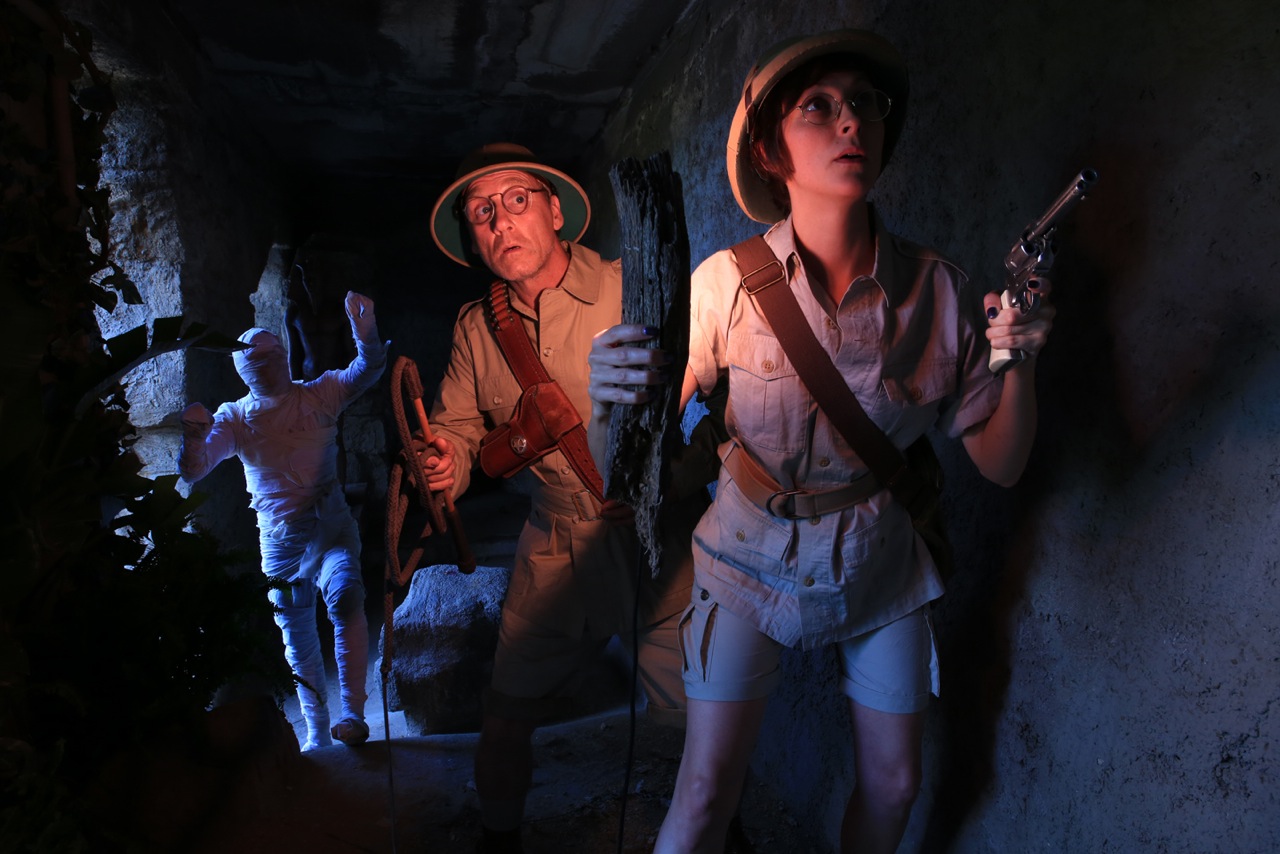 #3 I wanted to use a flame on the stick for the main light, but the City of Los Angeles said I would need a fire marshal and police – a lot of hassle that wasn't worth it. Instead, I decided to use a Dynalite Pencil light as the key light and taped it to the back of the stick. I also taped a full sun gel around the light to give it a warm fire feel. This is what our scene looks like with the light on the torch. 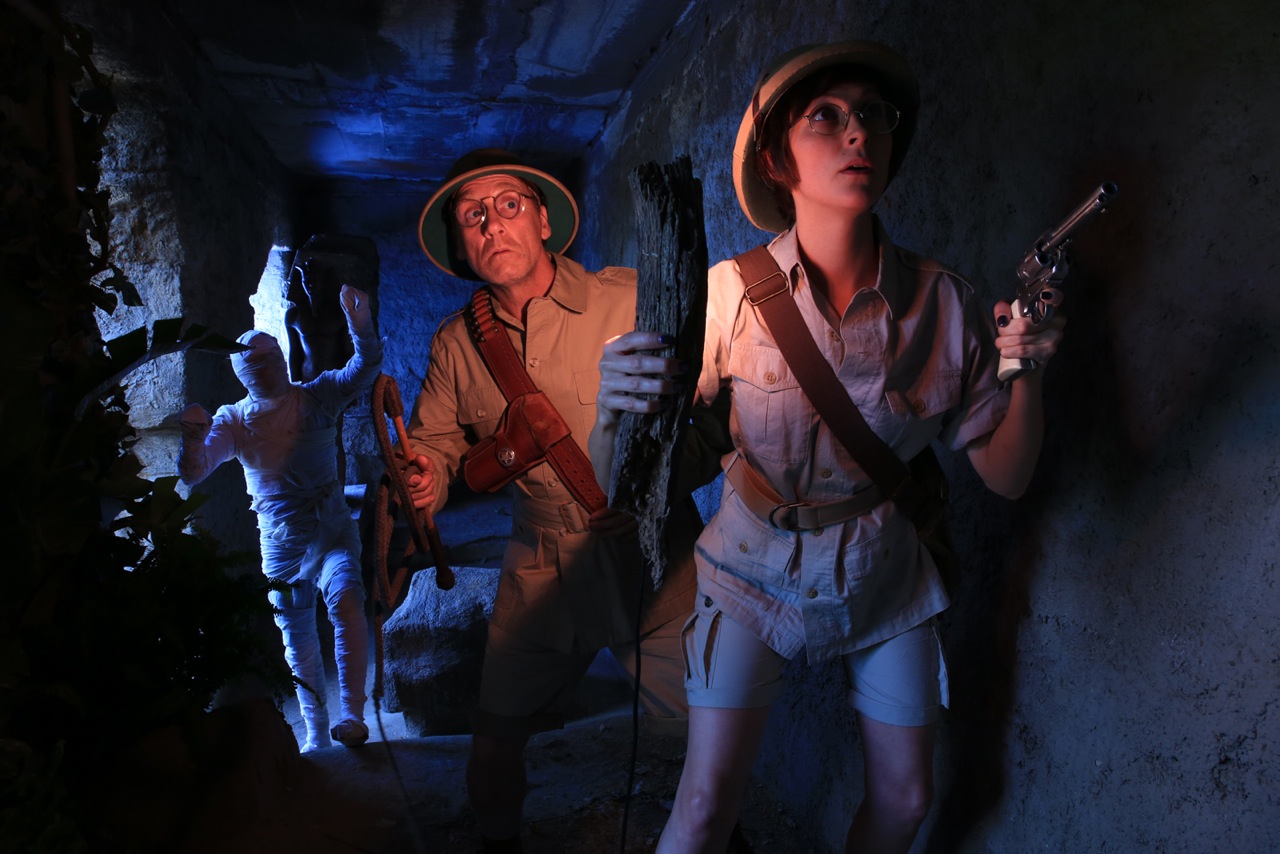 #4 The guy was standing there in the first image but we couldn't see him at all because there was no light on him. To separate the explorers and the mummy from the back wall, we added a Dynalite Travel Head with a blue gel at the openings at the back of the cave. It was too harsh by itself so I added a LitePanel reflector in front of the instrument to diffuse the light. Here is the image with the light in the back. 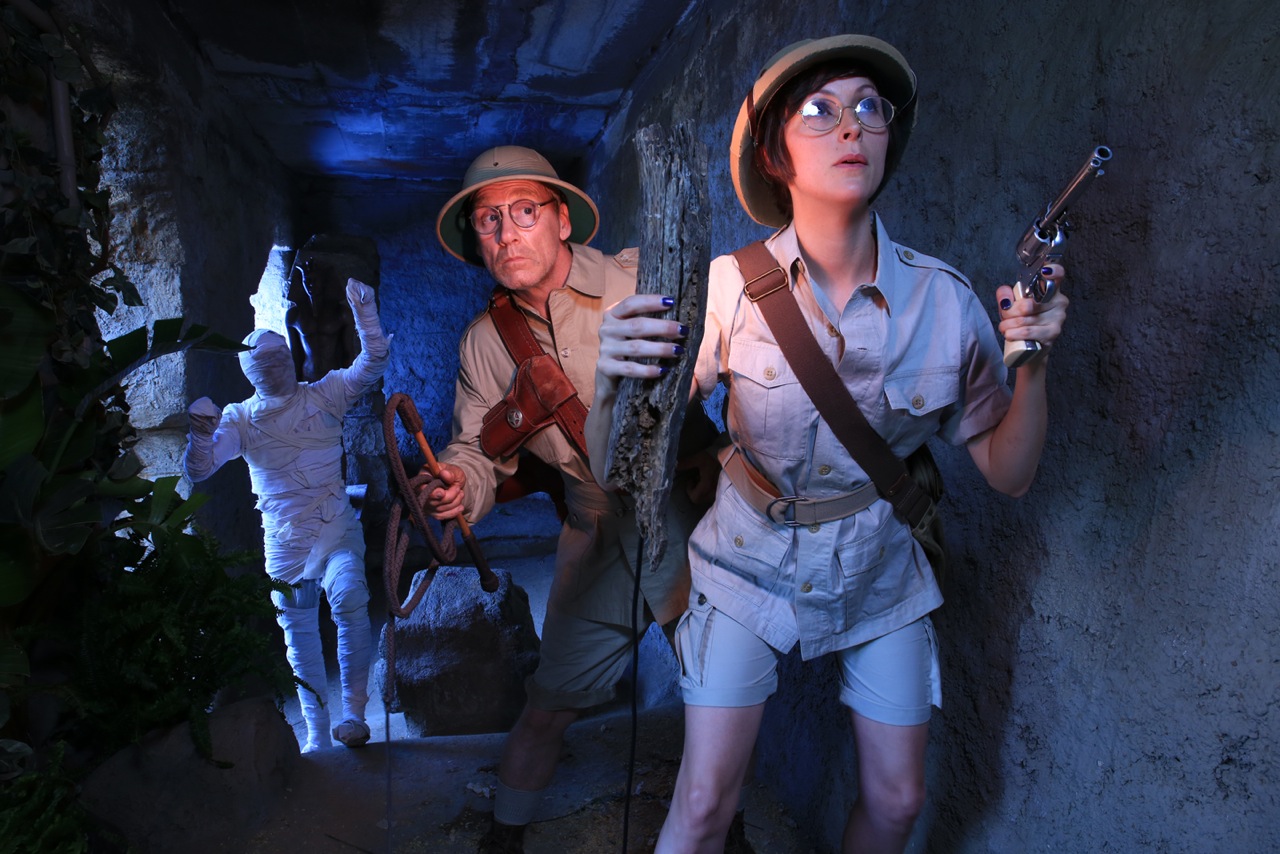 #5 The scene is really starting to take shape, now we just need to fill it a little more. I added a small, PhotoFlex Octodome over my shoulder on camera right. This opened up the shadows and allowed us to see our explorers' faces better. Here is the image with all the lights in play. 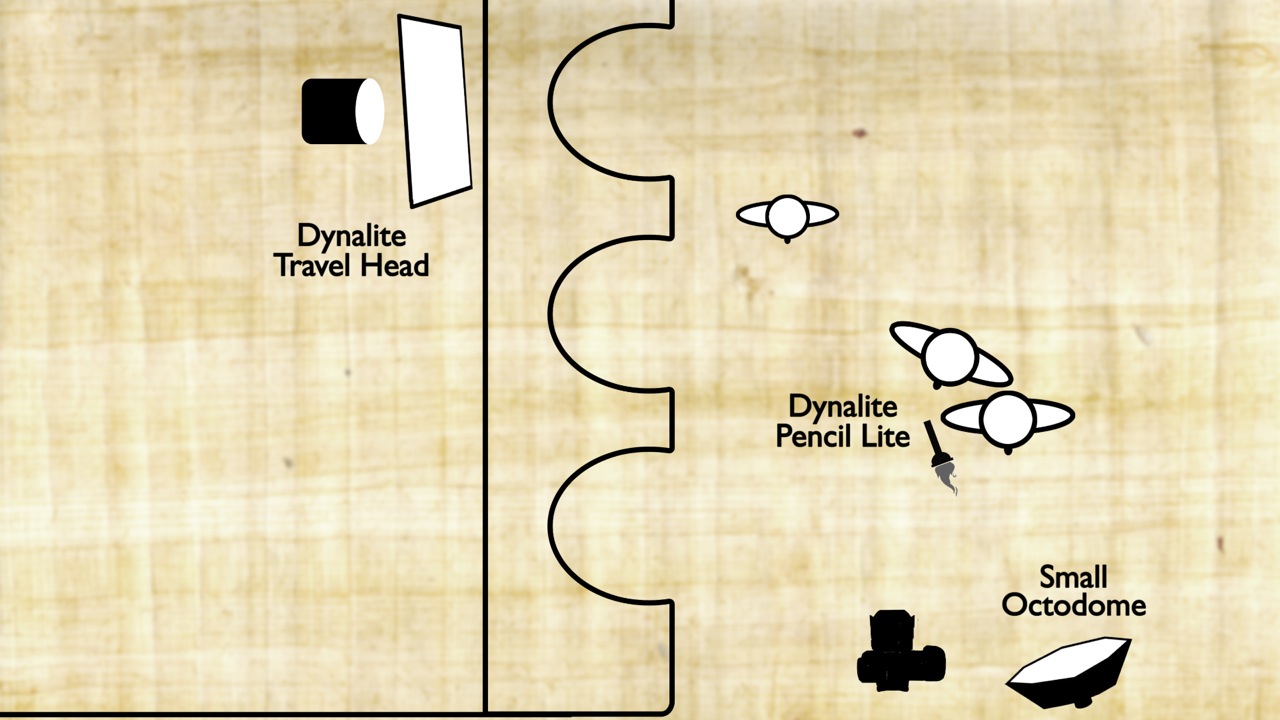 #6 Here is a look at the lighting breakdown. 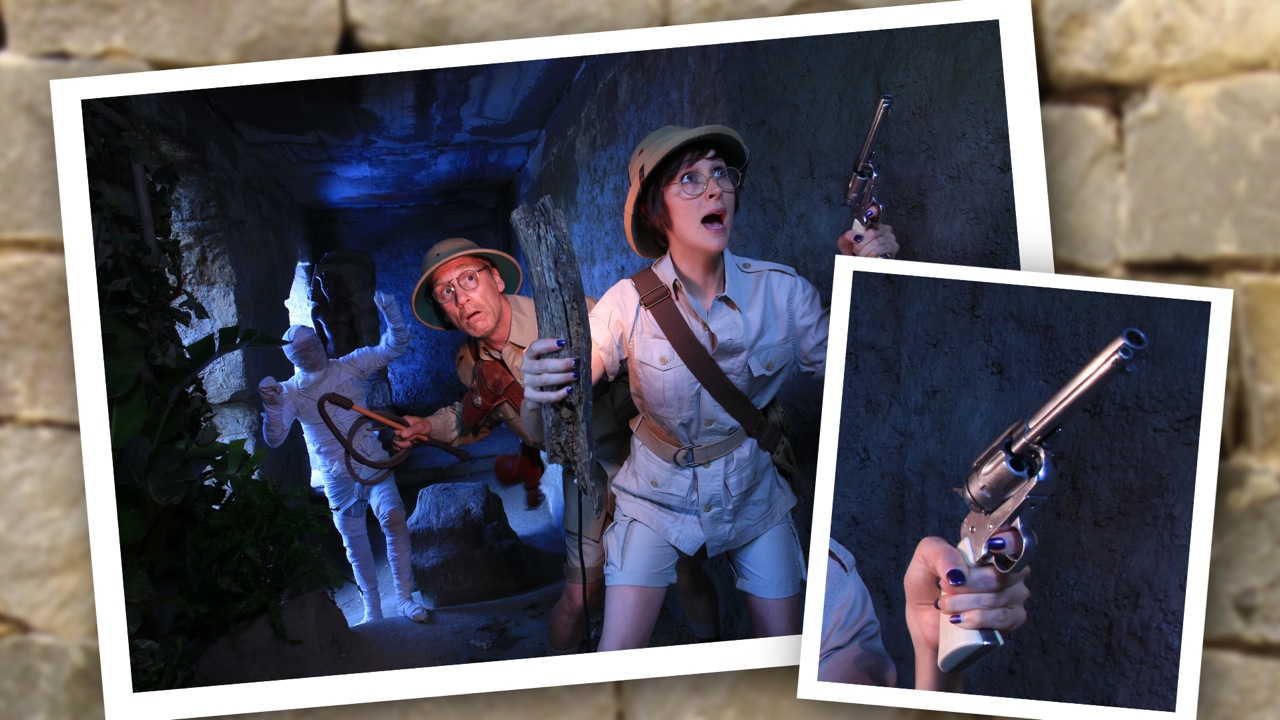 #7 I noticed that when the gun stood out more when it was turned into the fill light. I selected the shot I wanted to use for the final, and another image where the gun looked the best. 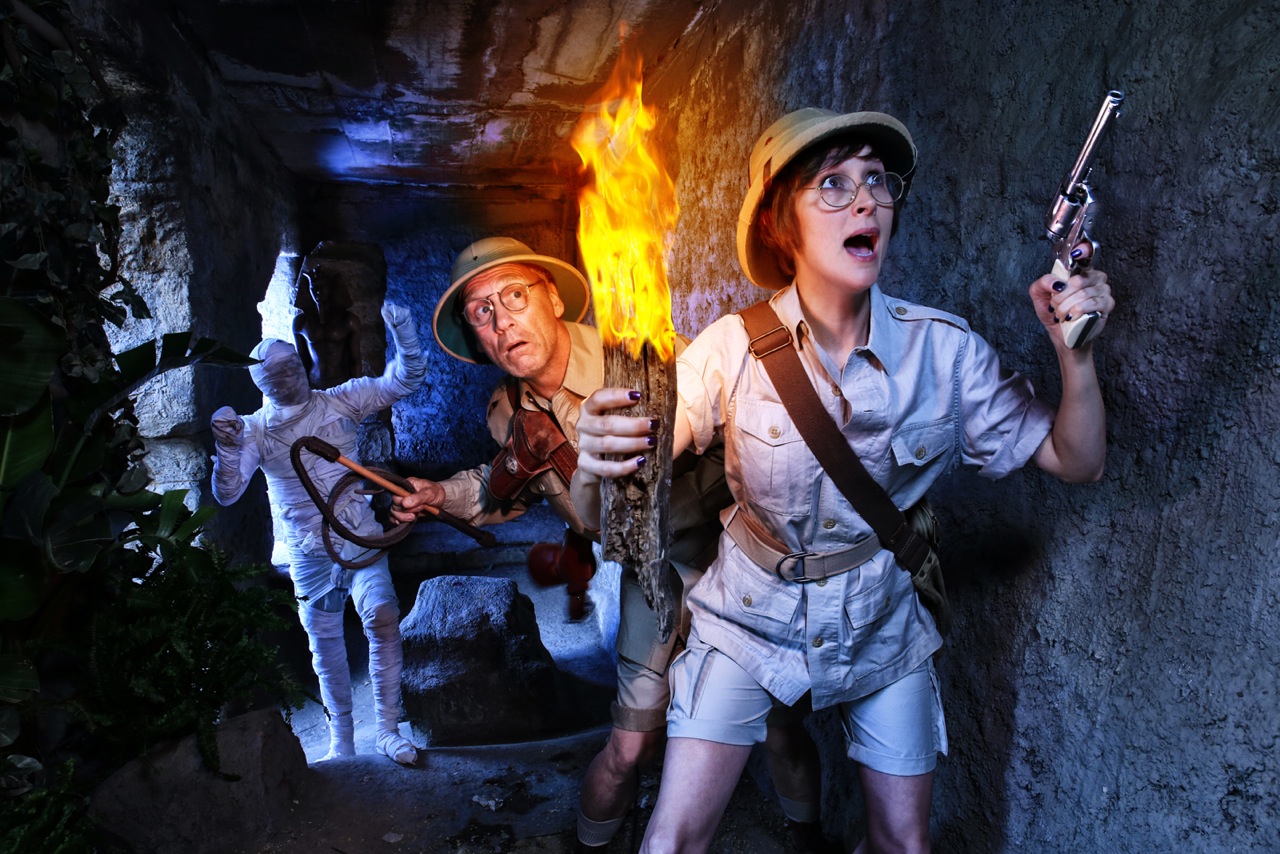 #8 In post, Julene composited these two images together. She also added a flame to the torch and a warm glow radiating off of the fire. Here is the image after Julene was finished working her magic. 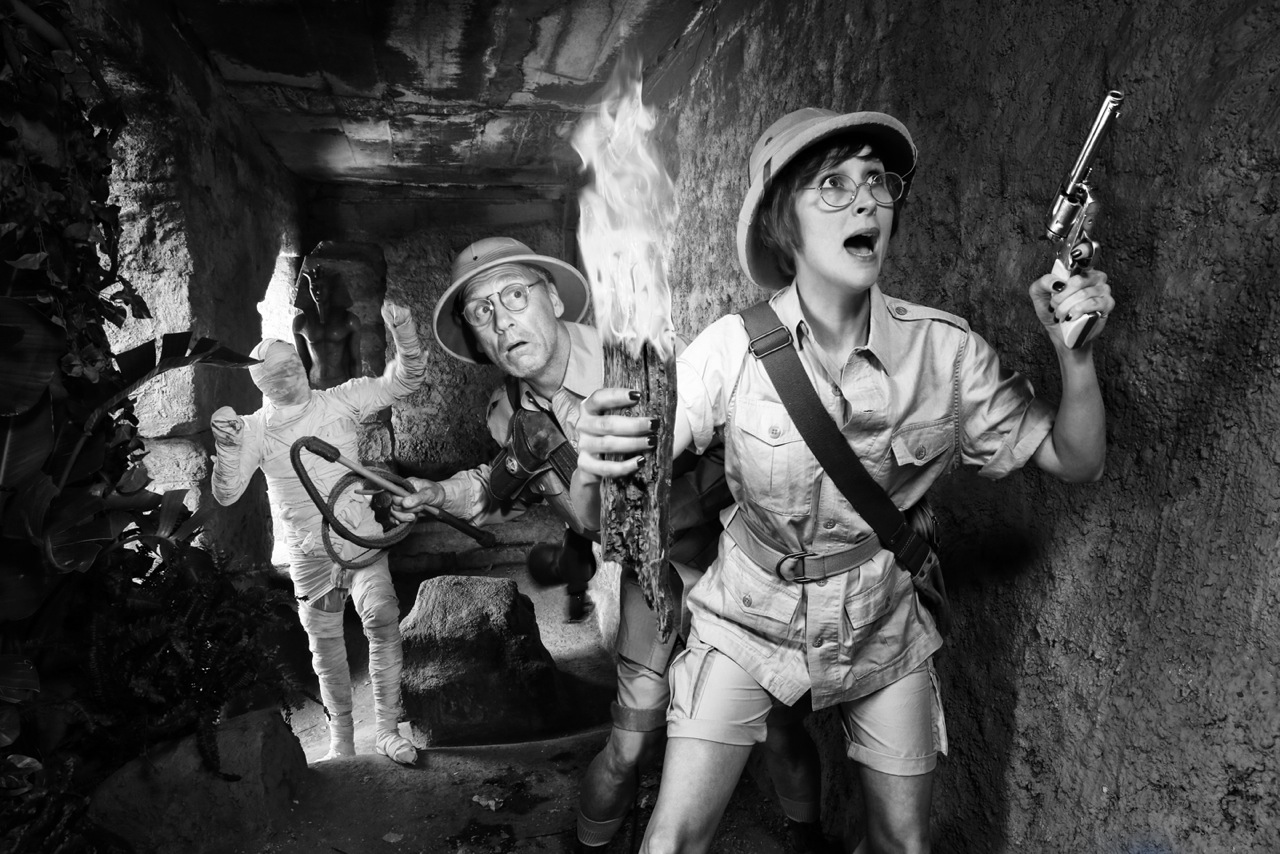 #9 I like this image, but it doesn't yet have that campy retro feel I was looking for. I took the image into Nik software to add some effects and see what I could come up with. Using Silver Efex, I changed the image to black and white. Here is the B&W conversion without any other effects. 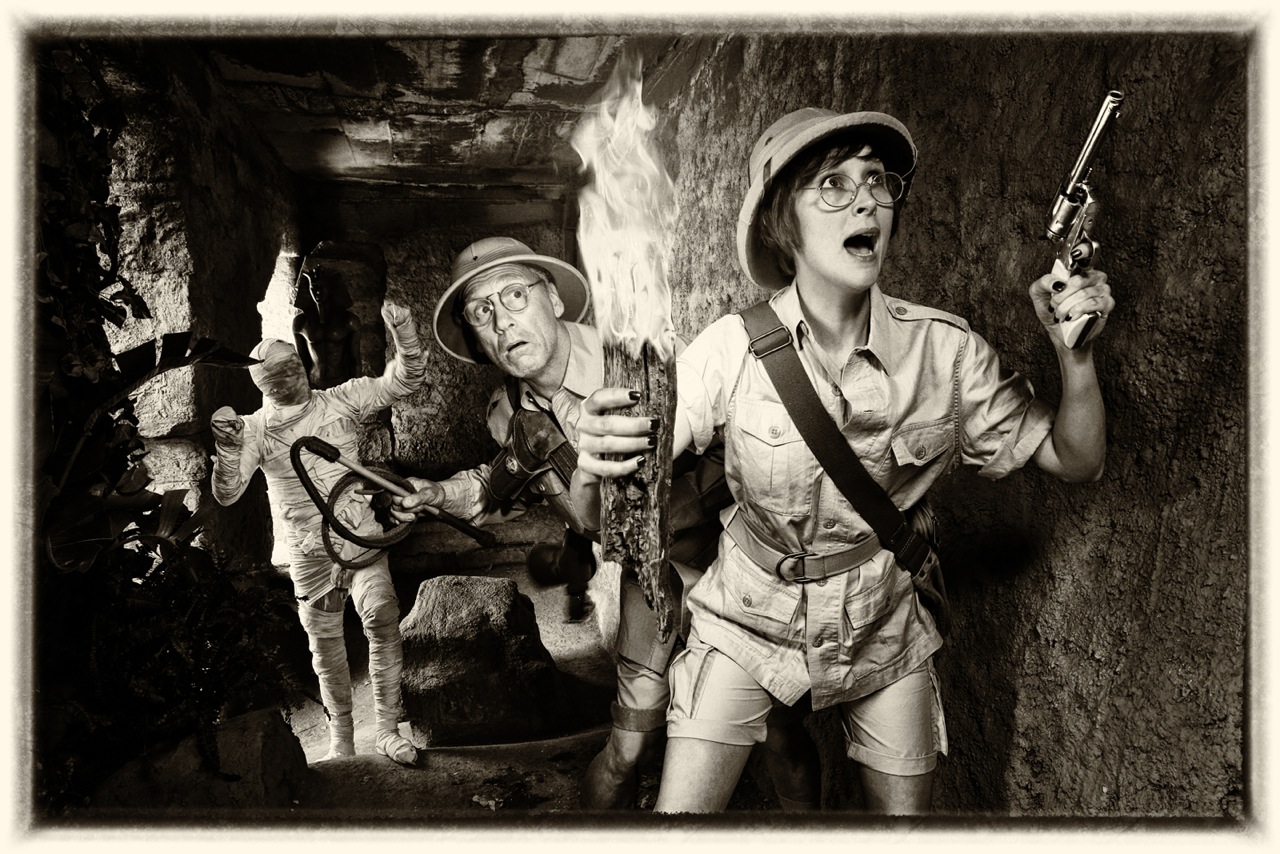 #10 Here is the image in black and white with the Yellowed 2 recipe settings applied. I really like the vintage look and border on this one. 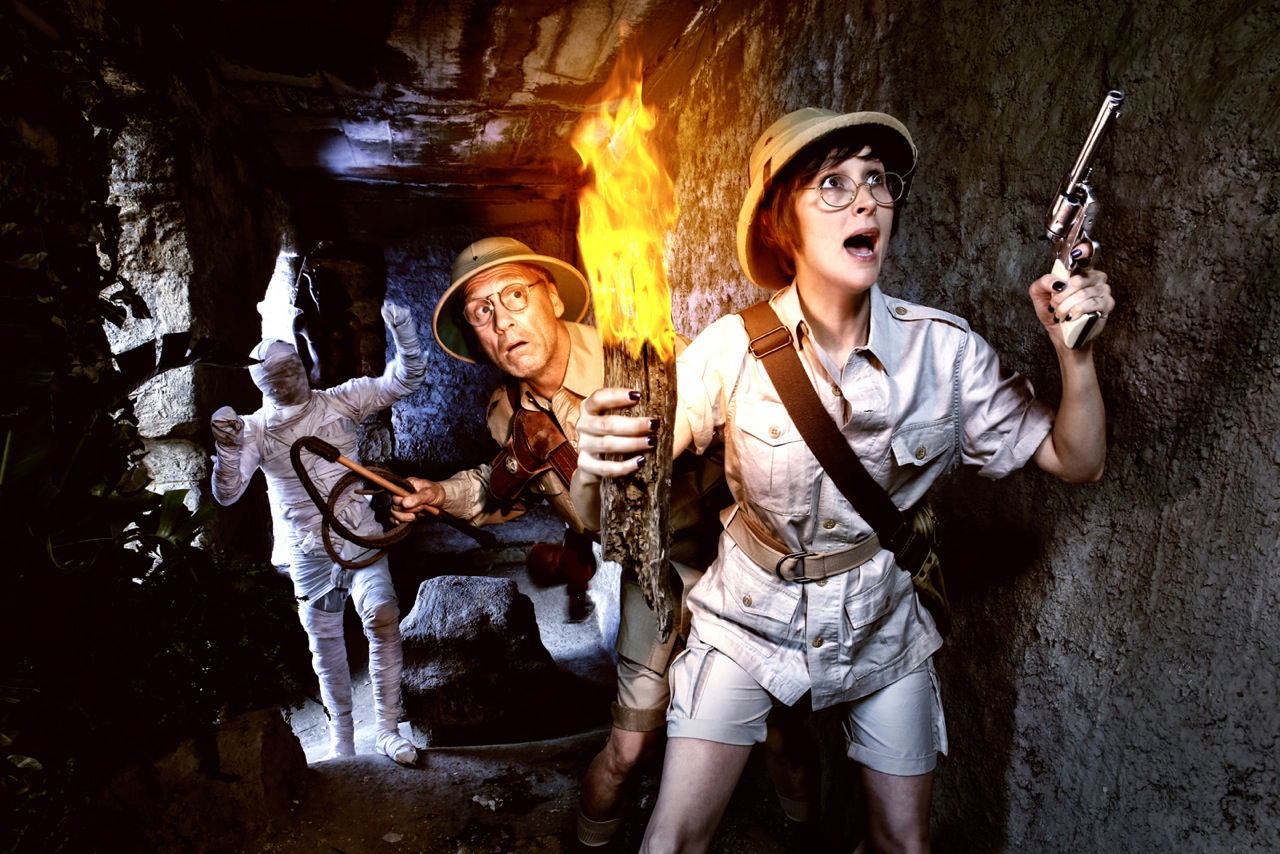 #11 I also did two color versions of the images using Color Efex Pro 4 in the Nik Software. First I used the Color Stylizer and added a deep brown for a sepia look. 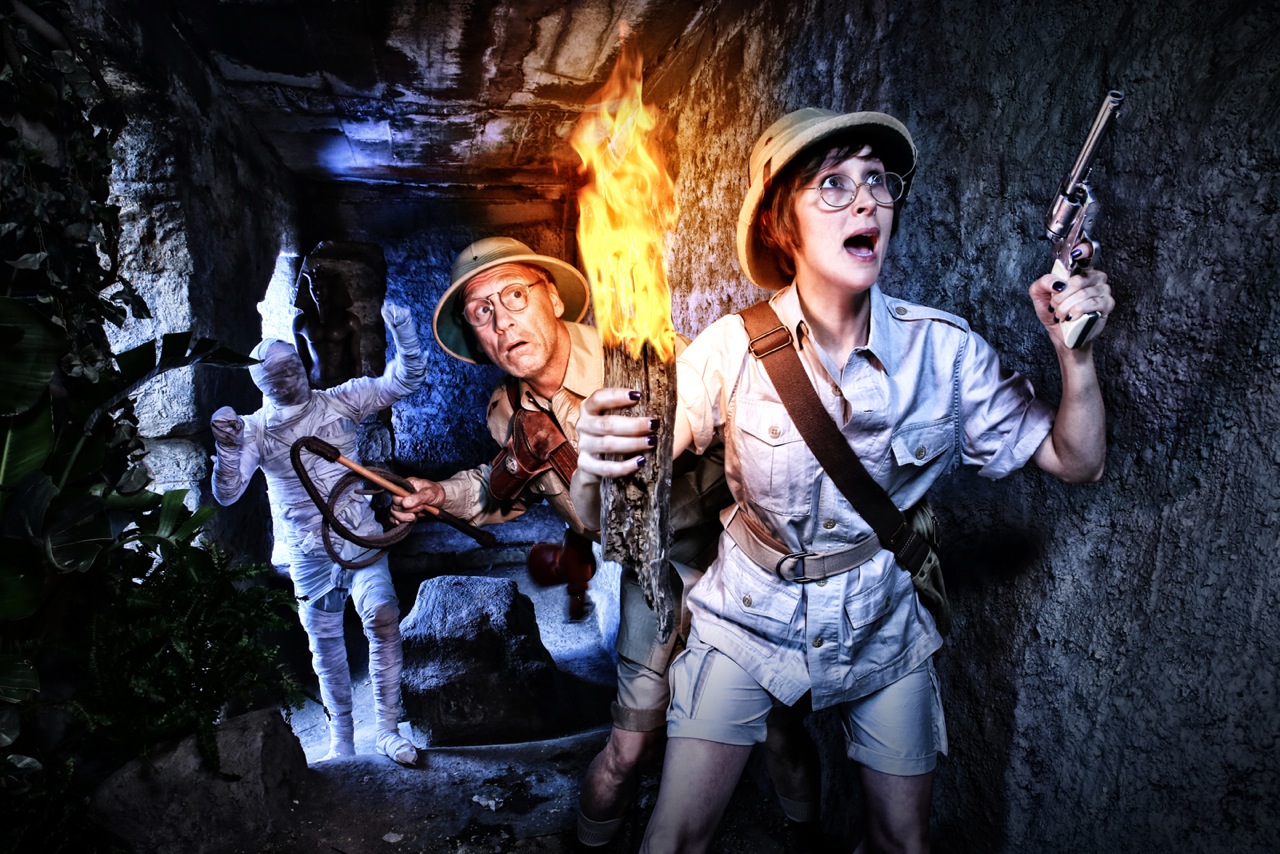 #12 Lastly, I did a Bleach Bypass with a vignette. All four of these images look great, so it is hard for me to decide on just one for the final. I guess if I had to choose, I think I like the look with the Color Stylizer the best.

Sometimes you just have to do these sort of set ups for no other reason than to just have some fun and get cool images. This was just a quick set up for some campy lighting, but I hope you learned something of value.

Thanks for watching. Keep those cameras rollin’ and keep on clickin’.