I first became aware of composition over time while watching the film The Hit.

There’s a scene where two characters have a conversation while leaning against a car. The shot is very low and very wide, and a lighthouse fills the background. On the right side of frame a character talks to another character who is offscreen. The conversation lasts for quite a while, and the composition felt very unbalanced until the offscreen character entered the shot at the end of the take. Here’s my rough sketch of what it looked like: 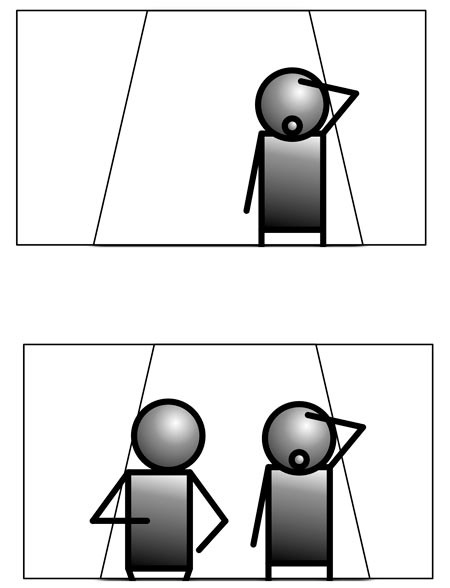 Shortly after watching this I realized how brilliant it was. The shot was framed for the two shot all the way through, but the two shot didn’t happen until the very end. The result was an unbalanced composition that built tension until the tension was finally released when the composition was completed. Essentially the DP and director constructed a frame and then subtracted a crucial element from it, waiting until late in the scene to add it. The audience knows something is wrong and feels stress until the composition is complete. It’s subtle but it works.

Often, when I’m working out a shot with a director, I’ll ask what shots come immediately before and after to help me figure out the composition. The most boring visuals occur when shots happen in a vacuum.