It also adds support for the Resolve Editor Keyboard for those few of you out there who want to use that keyboard with another NLE.

This will be welcome news to some, the venerable post-production tool CommandPost has added support for the DaVinci Resolve Speed Editor hardware console. This is a big deal as many didn’t think this was possible. The Speed Editor had seemed pretty locked down, at least as far as software interface goes, and accessible only when running the Resolve software. But leave it to smart engineers like the father of CommandPost Chris Hocking to get it working.

He did tell me once at NAB that he thought it was a nut he could crack.

@editblog Took me a few years longer than I hoped/expected, but as I told you at NAB many years ago, I’d get there eventually! pic.twitter.com/r24LClzabh

And now it appears he has done just that.

Hit the CommandPost menu > SETTINGS > Control Surfaces and there is a new option for Resolve that will let you map the control surface. 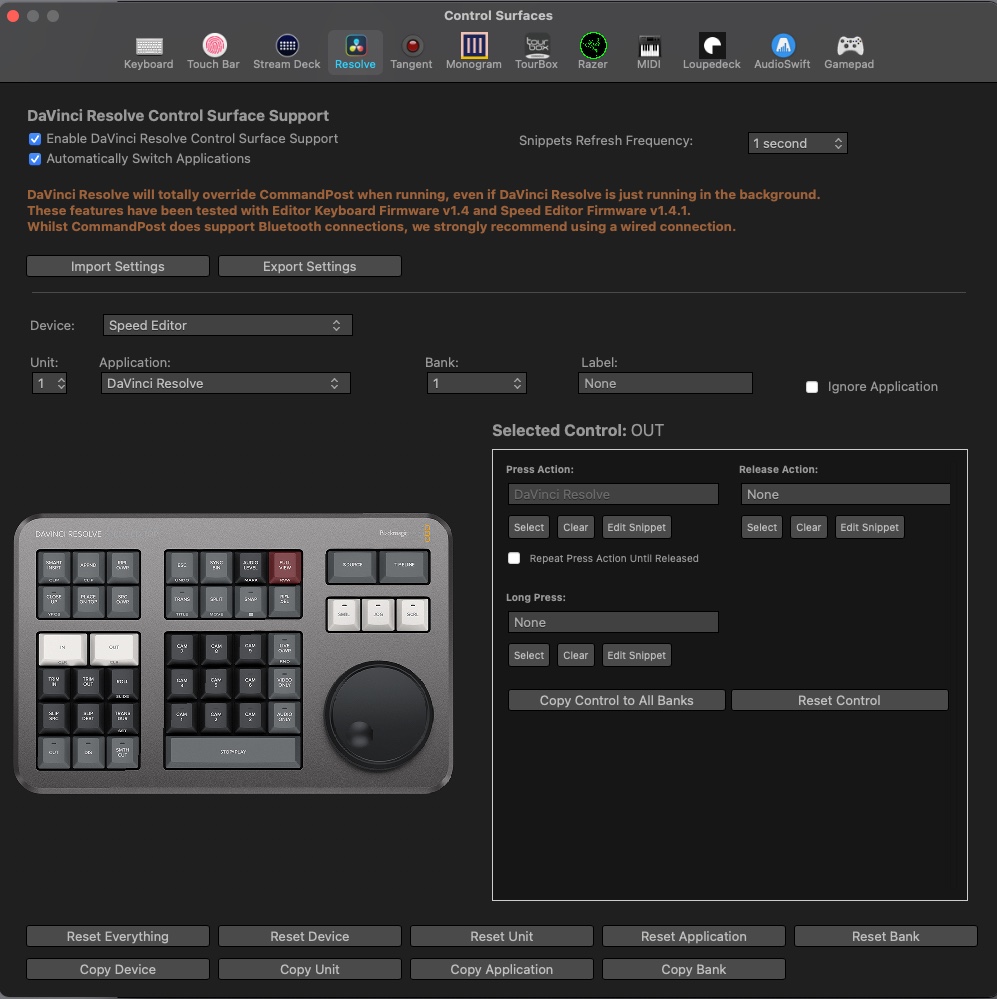 From there you have all the usual CommandPost options for mapping software controls to the Speed Editor. 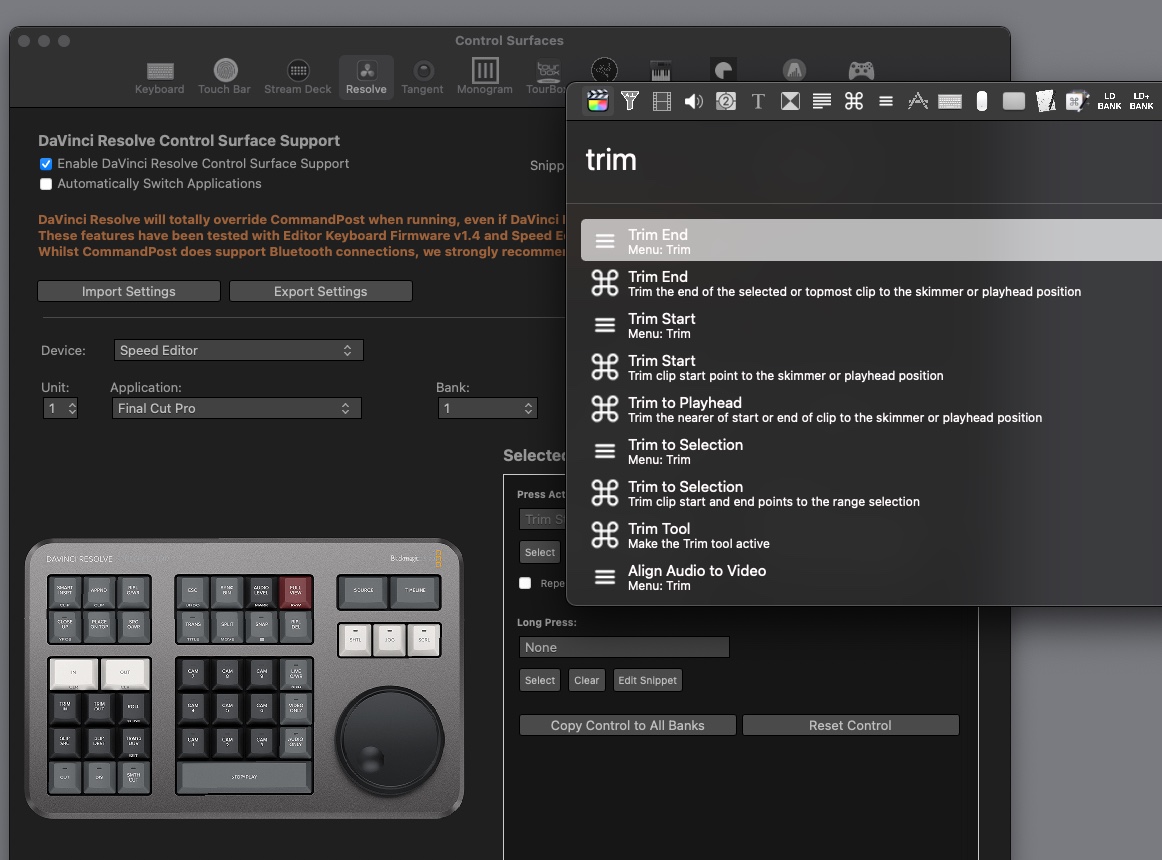 It does take some time to set up a control surface of any kind in CommandPost, especially if the application doesn’t have the menu items scanned and loaded. You can map keyboard commands to any control surface so the support is there but you just have to take the time to set it up. If you do always export your settings so you have them.

Surprise! Yes, Speed Editor everywhere. The only app we can’t control (obviously) is DaVinci Resolve, as it forcefully takes control back. Aside from that, you can now trigger any CommandPost action from the Speed Editor (and LEDs) from any app, just like Loupedeck, etc.

Or maybe you want to use your Resolve Editor Keyboard with Final Cut Pro! That should now be possible.

A little Twitter exchange about the FCP support might give you a bit more insight into what have here if you’re unfamiliar with what CommandPost can do.

You won’t get the exact same functionality as Resolve in FCPX. You can use CommandPost to map whatever CommandPost actions you want to the Speed Editor buttons for any app. The jog wheel has actions for turn left, and turn right. You can have multiple banks, and control LEDs.

For those unfamiliar with the whole story … CommandPost is a free (though sponsorship is welcome) software tool that runs in the background and does a number of things to enhance post-production. The CommandPost origins come from my complaining about how difficult it sometimes was to find your playhead after performing a match frame command in Final Cut Pro. Chris did some work to shut me up and a few years later, CommandPost was born. We’ve featured CommandPost a number of times here on ProVideo Coalition as it’s a great example of a post-production community work together. I wondered out loud in Part 1 of my Speed Editor review if it might be able to get Command Post support.

While CommandPost is very Final Cut Pro (X) focused it can be used with other software, namely running control surfaces. The control surface support is quite extensive.

I wonder about a system that has a Loupedeck, TourBox, Speed Editor and perhaps one more console all running at the same time for some kind of super-mega-control-surface-extreme editing. Maybe someday I’ll try to set that up assuming it can support all those surfaces at once.

This is Part 2 of my DaVinci Resolve Speed Editor review. In Part 1, I covered the hardware, trimming,...

Welcome to my review of the DaVinci Resolve Speed Editor. Hardware products designed to supplement and speed up video... 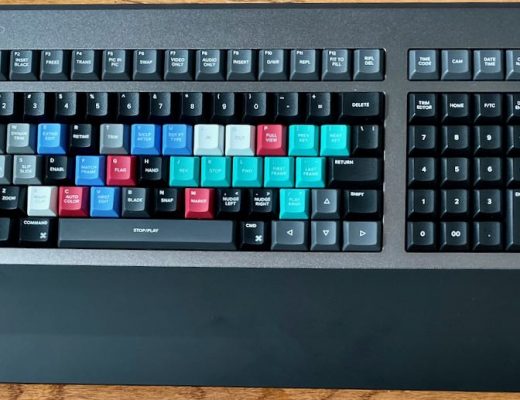 It was quite a surprise to many, at NAB 2019, when Blackmagic Design introduced the DaVinci Resolve Editor Keyboard....