I shot world class Arabian stallions on an F3 in S-log on the best lenses I’ve ever used. Come see it tonight.

If you’re in LA and a shooter, you should come to CineGear. And while you’re there, come see me talk about my shoot with the F3 in S-log mode shot on Leica Summilux-C lenses – perhaps the best lenses EVER.

So at the tail end of NAB back in April, I ran into my friend Yousef Linjawi, whom I had met during the shoot for the SCCE (Single Chip Camera Evaluation, also screening at Cinegear, at 10:15am on Saturday, HIGHLY recommend). He asked when I was headed back to LA, and I said I’d been planning on going rock climbing with a Utah friend but he’d bailed on NAB so no go. I asked what he was up to, and he said his family had several horses in the Arabian Breeders World Cup competition that weekend in Vegas, and since he had a lot of stills gear from Film & Video Times, he was going to go shoot stills of the event before heading back to LA. I said gee, we’re at NAB, wouldn’t it be great if we could wrangle a video camera to get some motion footage as well. Little did we know…

That was Wednesday afternoon – by Thursday afternoon, I’d talked to my good friend Randy Wedick from Band Pro, and he connected me with Peter Crithary from Sony, someone else I’d met during the SCCE. Peter said this could be a great opportunity to shoot some footage in S-log mode (Sony’s log like curve to get maximum dynamic range and performance out of the camera). S-log was still in beta, and there’d only been one shoot on the F3 in that mode so far (took place right before NAB). Score! Once that was secured, we had to figure out how to record it – how about trying the prototype SR Memory recorder, the SR-R1? Sure! Once those goodies were in the bag, I walked back over to the Band Pro booth and talked to Randy about a lensing solution. Amnon Band, the owner of Band Pro was there, and he said if we were really, REALLY careful, he’d let us use THE Leicas. Not the caps there – THE Leicas as I like to refer to them, are the prototype Leic Summilux-C prime lenses, perhaps the nicest prime lenses ever made – light, sharp as hell, T1.4, and the set of six when they mass produce them will cost more than I paid for my house in Austin (they’ll cost $178K, but if you have to ask….) So of course I said I would treat them like a newborn son. We also secured an S.two OB-1 from Ted White of S.two, who was also incredibly gracious and helpful at the last minute as a second recorder. Joe Schimizzi from Sony helped us prep but couldn’t come with at the last minute, but we were lucky to snag Sam Fares from Sony to come with to help us out – neither Yousef nor I had ever shot on the F3 and weren’t familiar with the menu systems.

So that was Thursday afternoon we rolled out of NAB with our camera booty, and Friday morning we were at the Breeders cup to shoot. The horses are GORGEOUS, and the show is a cross between a rodeo and a dog show. Really, think of it as a dog show for horses – no one ever rides them, they just run them around on a leader or let them run free (the most gorgeous footage). We had the F3 in S-log mode recording to the SR Memory until we couldn’t use it any more, then switched over to the S.two recorder for the remainder of the shoot. The SR-R1 is light for its size, and AMAZING for what it can deliver – the same codec as HDCAM SR at 220/440/880 megabits, allowing for hours and hours of recording on a single 1TB card that can fit in your shirt pocket.

We got some FANTASTIC footage – Yousef is FEARLESS and has no shame or compunction about getting right in the middle of the action. I cringed when he lunged out into the arena to shoot from behind some decorations DURING THE COMPETITION – this struck me a bit like putting a foot onto the active playing field during a football game to get the shot – but the results are great, so my naturally polite southern self got over it. We shot next to and (eek!) in the arena, back in stables, in the prep arena, everywhere.

Here’s a frame from the finished results – Yousef was operating and pulling focus of these horses wildly cutting back and forth around the arena at high speed: 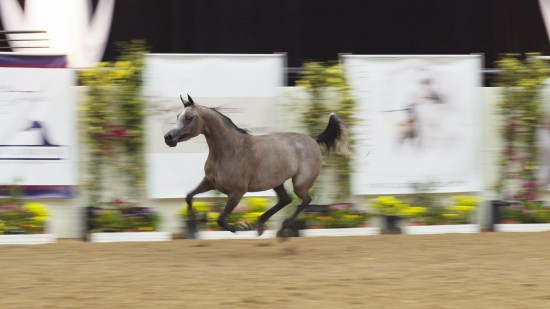 Yousef worked his usual social engineering magic and found a friend, Affan Taner to cut a quick piece together that we’ll be showing tonight. Peter wrangled Sony’s Colorworks to color correct the piece for us from the source uncompressed DPXs in P3 color space, and it will be showing either from an HDCAM SR tape or a DCP (Digital Cinema Package) on a Sony 4K projector. So this is about as good looking as you’re going to get on an F3 — shot S-log uncompressed, posted in P3 color space at a professional facility and output to a high quality master. So it was truly a world wide effort – a Saudi DoP, a Turkish editor (Affan finished the edit from Turkey, THANK YOU!), Peter is Australian I believe, and I’m from the country known as Texas. 🙂

We shot hours of footage on the native SxS cards (for offline), SR Memory, and OB-1, and edited an S-log only piece together that we’ll be showing TONIGHT form 6-7 at Cinegear at the Studios at Paramount (info at cinegearexpo.com) at the Paramount Theater. We’ll show the footage, discuss the F3, S-log, SR Memory, the workflow, all of it. Myself, Yousef the DP, Peter Crithary from Sony and other Sony folks will be there.

I have looked at a lot of F3 footage very closely – the F3 was one of the dozen cameras we tested for the SCCE (Single Chip Camera Evaluation), but we’d tested it in 4:2:2 mode only, not 4:4:4 and not S-log (those features were not released when we tested). The low light performance was amazing during that test in Rec709 4:2:2, but the highlight rolloff wasn’t very pleasing. THIS CHANGES THAT. The camera is instantly, notably improved in highlight response (the point of S-log), and if you weren’t happy with the F3 before, it is time to look at it again. Come out and see – it is almost a different camera (well, the same, just better).

If you can make it, come on out!

If you can’t, come out to see the SCCE results tomorrow morning at 10:15 in the same theater – if you are thinking of shooting something on a single sensor camera, you NEED to see this. I’ll write about that next….