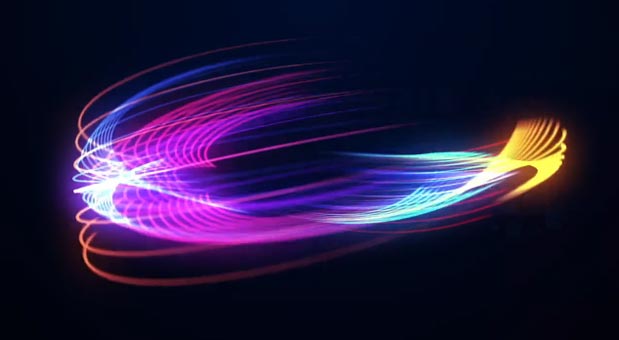 In a new training video in English and French, Colored Light Paths with 3D Stroke, Mattias Peresini (aka Mattrunks) shows the basics of Trapcode 3D Stroke. There were been a number of similar tutorials in days of iPod and graffiti yore, but they're harder to find now that the effect is not as popular.

Tutorials by Brad Chmielewski (Animated Cartoon Arrows) and  Nick Campbell (How to make 3D Text and use 3D Stroke in After Effects) are still easy to find though. And Andrew Kramer has several alternatives: 3D Stroke Effect using CC Particle World, Light Streaks and the improved Light Streaks 2 using Trapcode's Particular, and of course some light flares. Here's one:

Somewhat further afield are Spirograph designs and Radio Waves effects, and others, referenced in the roundups Spirals in After Effects and Spirographs in After Effects. Later, Evan Abrams posted Wave Patterns in After Effects, showing off linear gradient strokes, depth, and using a shape layer with a repeater:
Also similar is AE Flame, a free plug-in for CS4 & CS5. Going further still is Freddie Wong and crew with Light Warfare, which builds on earlier graffiti-light graphics.

Here's a preview render for new tutorial by Mattrunks, which was translated by Dominic Pons:

Update: In addition, check out the free new preset by Victoria Nece in Get the look of Trapcode's 3D Stroke with no plugins!