Codex, the leading developer of digital media recorders and media management systems for film and television production, today announces that its compact Onboard S recorder supports Canon Cinema RAW. Codex will demonstrate the Onboard S (and other products) at IBC 2012 in Amsterdam (Stand 11.F41). It will be the first time that the Onboard S will be seen at a European tradeshow. 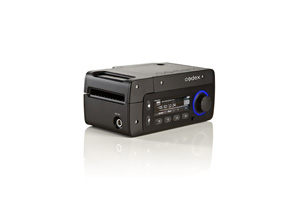 “Codex is committed to assisting filmmakers by providing support for the best new camera systems,” stated Codex Digital Managing Director Marc Dando. “We are especially committed to providing reliable and efficient tools to support raw formats at every point in the production workflow.”

Codex has been consistently in the lead in supporting new digital cameras and camera formats. Its flagship Onboard M recorder was the first certified by ARRI to record ARRIRAW from the ARRI Alexa camera. The Codex-ARRIRAW workflow has since been employed in scores of feature film productions, including The Avengers, Extremely Loud and Incredibly Close and Abraham Lincoln: Vampire Hunter. The Onboard S has already been certified to record ARRIRAW.

Similarly, Codex worked with Canon. as it developed the Cinema EOS C500 and Cinema EOS C500 PL cameras.. The Onboard S can record 4K RAW files from the C500 onto Codex Capture Drives. A single Codex Onboard S recorder can capture up to 120FPS.

The Onboard S has already been used during Canon’s beta testing of the C500 to record 4K Canon RAW data for several feature film and commercial productions, including a sequence in M. Night Shyamalan’s After Earth.

The Codex-Canon Cinema RAW workflow is bound to be popular among filmmakers seeking to capture high resolution imagery with a small camera and recorder, along with a robust and proven workflow. Cinematographer Shane Hurlbut, ASC is already a fan, having been involved in several projects during beta testing. “Taking my images to extremes is what inspires me as a cinematographer and the last time I used the Codex S recorder it was traveling at 160 mph at 12,000 feet falling from the skies in the Swiss Alps. Compact, lightweight, and obviously built like a brick house.”

Codex produces a number of products that support the recording and management of raw camera data. They include the Codex Transfer Station for Mac OS X, the Codex Digital Lab and the Codex Vault S, each of which provides powerful tools for metadata management, quality control, dailies generation and archiving.

Editor’s Note: The product names and registered trademarks mentioned are each the property of their respective owners.

Noa Koefler and Hannes Lochner: a passion for wildlife

Sony Xperia smartphones are tools appreciated by filmmakers and photographers. The new Xperia PRO aims to open up a...