This time, a collection of resources on expressions and scripting – including a PDF of Bonus Chapter 37C on scripting.

In addition to the book’s introductory chapter on expressions that we covered last week, the dual-layer DVD-ROM that comes with CMG5 includes bonus chapters on both expressions and scripting. Rather than try to boil down nearly 70 pages of PDFs into our customary handful of gems, this week we thought we’d share a set of resources on scripting and expressions – including Bonus Chapter 37C itself, written by Dan Ebberts of MotionScript.com.

In addition to Creating Motion Graphics, we have a more introductory tutorial-based book called After Effects Apprentice. Its DVD-ROM included several video introductions to key concepts, including expressions. Click here to view that introductory video.

The above video was recorded using After Effects CS4. Since then, we have been creating a video course based on the After Effects Apprentice book. Here is a blurb for the installment on expressions, including a video overview of the course. Earlier this month we also shared a free video on how to use the versatile “wiggle” expression.

Bonus Chapter 37B is called Deeper Modes of Expression, and contains 64 pages of more advanced explanations of everything from useful math expressions (such as how to round off numbers or move in circles) to arrays and space conversions to managing time to making decisions to random numbers (and far, far more).

We reproduced each section of this bonus chapter as a series of articles here on ProVideoCoalition; click here for the index to Deeper Modes of Expression.

Books on Expressions and JavaScript

So far, there has been just one book dedicated to the subject of expressions: After Effects Expressions by Marcus Geduld

. Aimed to take you from beginner to expert status, it promises that “no programming skills are required. Foundation concepts and skills orient the new designer and serve as a handy reference to the experienced one. Basics of creating Expressions, variables, commands, and Expression helpers precede the leap into JavaScript and math essentials for more advanced Expressions that include randomness and physical simulations.” (There’s a rumor of an upcoming book on scripting by a popular After Effects power user; fingers crossed.)

Expressions are indeed based on JavaScript. Once you go beyond simple pick whip constructions and want to start coding your own bits of animation automation, it’s a good idea to have a desk reference on the language at hand. My personal favorite is JavaScript, A Beginner’s Guide, by John Pollock

. In addition to the traditional subject of programming advanced web pages, this book contains some of the simplest, clearest explanations we’ve seen of the JavaScript language and how it works.

Web Sites on Expressions and Scripts

If you’d rather just use finished, polished scripts than learn to write them, then your one-stop shop is AEScripts.com. Some scripts request or require a donation, but I haven’t seen a single one that wasn’t worth several times more than the modest fee being asked.

If you want help navigating the long list of scripts available on AEScripts.com, then I suggest you follow Mark Christiansen’s series After Effects Script of the Week series on his blog on ProVideoCoalition.com.

And of course, one should never overlook the online version of the Help file for After Effects; it goes beyond being just a manual and often includes links to external resources. Here are the direct links for expressions help and scripting help. 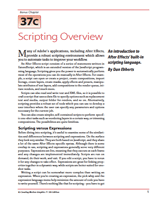 And finally, as promised, click here to download Dan Ebberts’ Bonus Chapter 37C: Scripting Overview from CMG5. It includes a comparison between scripting and expressions, and then quickly moves onto constructing a couple of simple example scripts you can write yourself. At the end, Dan includes his own list of favorite resources. Enjoy!