FUJINON released a video where Claudio Miranda shares behind the scenes footage, stories from the set, and all the ins and outs of selecting and working with the gear used to create the film. 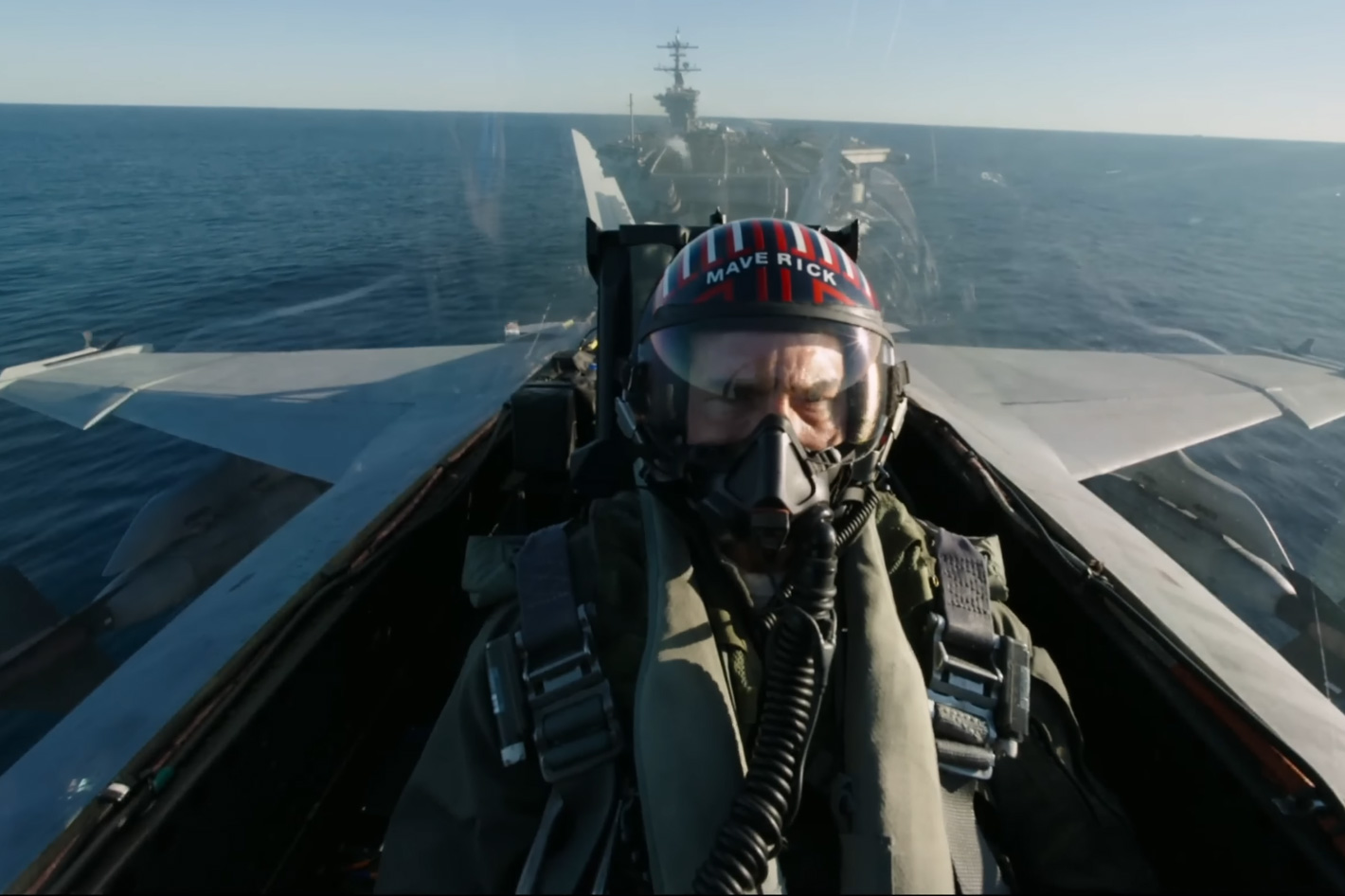 As filmmaker Claudio Miranda, ASC, states ”this is not green screen nonsense!” showing how the team shot Top Gun: Maverick, it’s time to look at other films with fast flying aircraft and also how you can be Top Gun.

After a long wait, due to Covid-19, Top Gun: Maverick is flying to theater screens all around the world, and it’s time to review all that was said a couple of years ago, when it appeared as if launch was just a few months away. Marketing teams are exploring every aspect of the movie, while magazines rewrite stories about how this is a history-making film. In some sense, Top Gun: Maverick feels like a wine that has matured with the passage of time and feels even better now. It’s also a good time to check what others did before it, when it comes to flight sequences.

Whatever your take is on Top Gun’s “fever”, this is a fantastic action movie, even more so because, as award-winning cinematographer Claudio Miranda says on the short video now released by Fujinon, ”this is not green screen nonsense!” In a Hollywood that is now so dependent on CGI, Top Gun: Maverick shows us the real cockpit environment of a F/A-18 Hornet… with the actors sitting on the back seat, going through the excitement but also the harshness of flying. As Claudio Miranda says, “The whole thing about Top Gun is trying to get things in camera, to get people flying in the air.”

While other films have used flight sequences, long before Top Gun: Maverick, it makes sense to mention here the French movie Les Chevaliers du ciel, renamed Sky Fighters for English speaking audiences, which deserves a place as a pioneer, making the dream possible… in 2005. The aerial sequences for thaty movie were done with the cooperation of the French Air Force, and actors had a chance to fly – as passengers, as in Top Gun – in a military jet used, to experience the same sensations and forces pilots do. Although the final cockpit scenes were mainly filmed with a special built simulator cockpit, using a green screen, actors spent a lot of time on flight simulators used to train real pilots, to learn everything they needed to play the part. 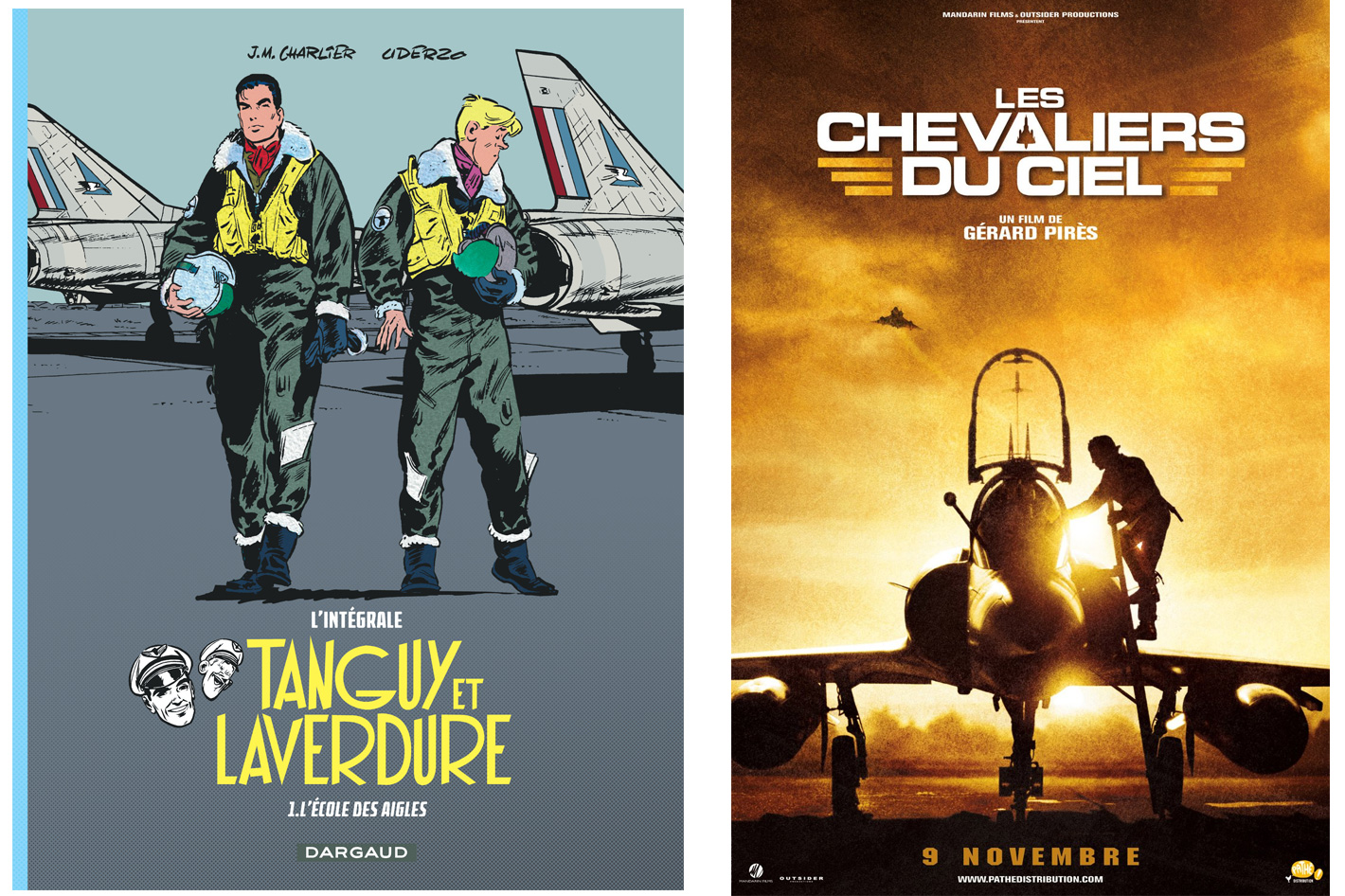 The filming of the flight sequences in Sky Fighters was mainly done by Eric Magnan, co-founder of Airborne Films, considered as the director with the greatest experience in aerial cinematography. He logged more than one thousand flight hours in Air to Air shoot of which 250 hours on supersonic fighter jets. Eric is also a pilot and a skydiver.

I remember writing one article about Les Chevaliers du Ciel for an aviation magazine, back in 2005, and refer that Eric Magnan directed all the aerials scenes of the movie which represents 1/3 of the whole film. Watching that now, again, as I write this new note about Top Gun, makes me remember how excited I was when the film was released, also because the French movie directed by Gérard Pirès is loosely based on a comics series which was part of my youth: Tanguy et Laverdure,  a 1959 Franco-Belgian comics series created by Jean-Michel Charlier and Albert Uderzo (of Astérix fame) about two pilots from the French Air Force, which was also the base for a TV series from 1967 to 1969.

Watching the behind the scenes for Les Chevaliers du ciel reveals how much the original Top Gun, from 1986, influenced the French film. It’s also interesting to compare what was available at the time and now, in terms of equipment. For Les Chevaliers du ciel one of the Mirage’s external fuel tanks was modified to fit multiple cameras. Tracking shots were done from a hired Lear Jet. Compare this with the gear and aircraft used for Top Gun: Maverick.

On the FUJINON video now made available Claudio Miranda mentions a list of the FUJINON lenses used in Top Gun: Maverick. It includes: 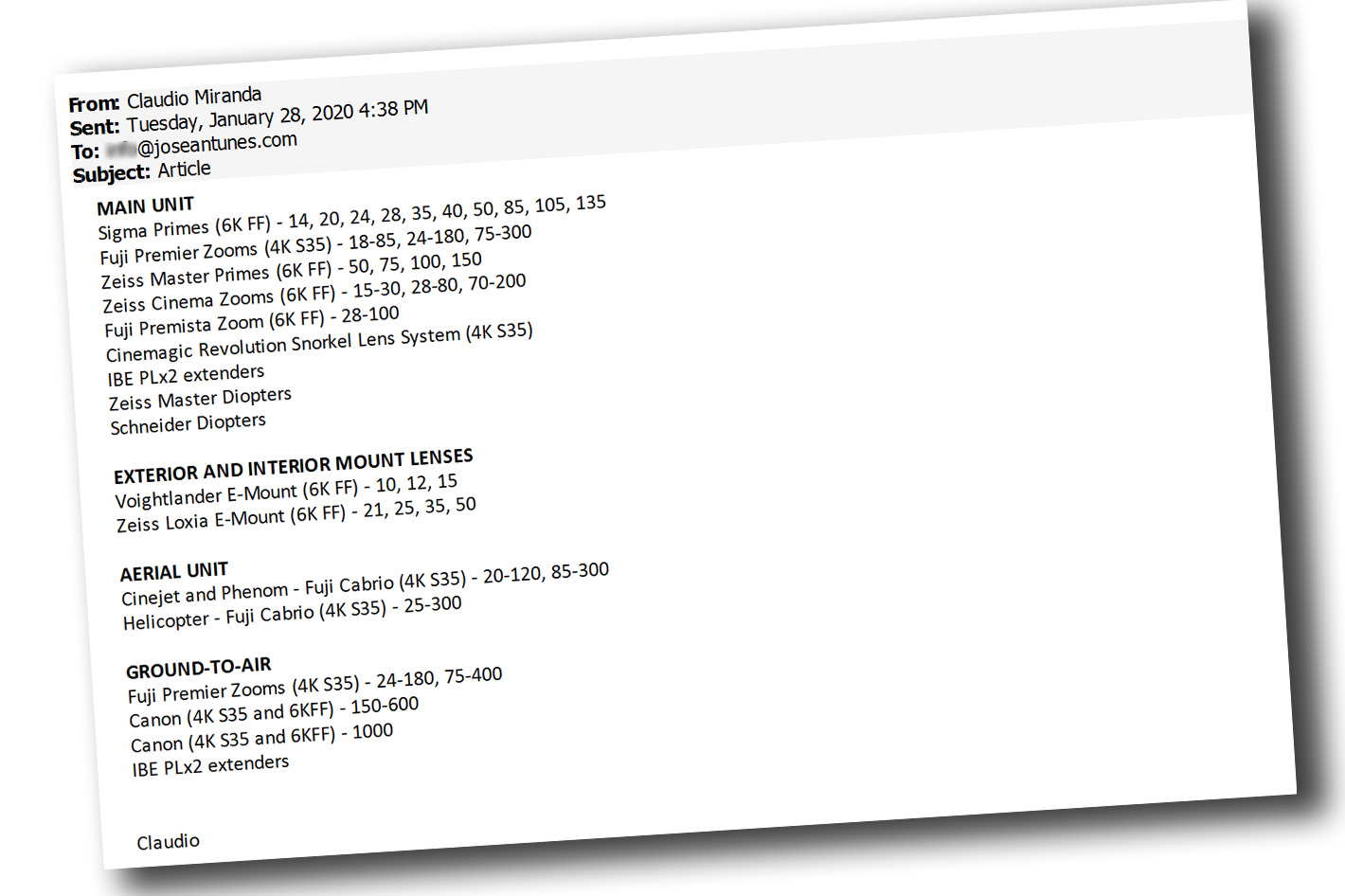 To this list I can add another one, with ALL the lenses used in Top Gun: Maverick. The list was sent to me by filmmaker Claudio Miranda on January 28, 2020, as we exchanged emails about the camera – VENICE – used to shoot the film. Here is the complete list of lenses and accessories I received from him:

Being Maverick in Virtual Reality

One final note for all those who after watching Top Gun: Maverick and, hopefully, the pioneer Les Chevaliers du ciel, feel… the need for speed. A fully immersive Top Gun experience is possible, using two flight simulators available, DCS and Microsoft Flight Simulator. DCS, which has a study-level version of the F/A-18 Hornet has, since 2020, compatible “skins” – or textures – that transform the aircraft in Maverick’s F/A-18. Follow the link to download one of the versions. It’s a blast, especially when using a Virtual Reality headset, and you can do everything from landing on an aircraft carrier to low-level flying… or dogfight!

Microsoft Flight Simulator has also launched, to coincide with the release of Paramount’s film, it’s version of Maverick’s F/A-18 Hornet, served with some challenges, from low-level flying to aircraft carrier landings, which will appeal to those using the simulator. Although this version of Maverick’s F/A-18 Hornet is more for the masses, the fact that it also works in VR helps the immersion, with the extra bonus of Microsoft’s simulator: you can fly anywhere in the world.

Some may think that this final note has not much to do with films, but how many times have you wanted to be the hero, after watching a movie? Well, here you can, either with the much realistic DCS representation of the Hornet or the “softer” approach proposed by Microsoft, which is an official tie-in to the movie. Allowing you to not just see the film but get immersed into the action, thanks to the magic of Virtual Reality. 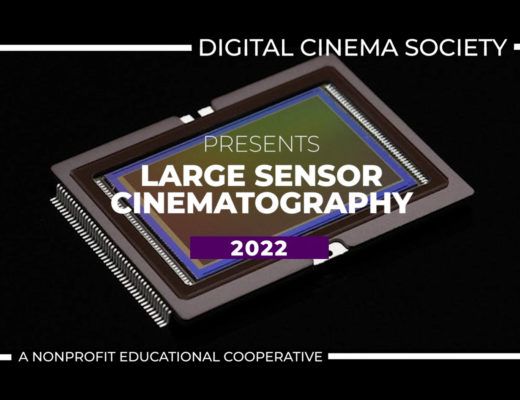 Based on interviews with a dozen renowned cinematographers and industry experts, Large Sensor Cinematography is a 30-minute documentary released...