When I don’t have time to write a dedicated article I’m going to write one of these mini articles, where I wax eloquent about whatever happens to be on my mind. Today: cheap zoom lenses, monitor gamma tricks, and avoiding lamp flicker hell. 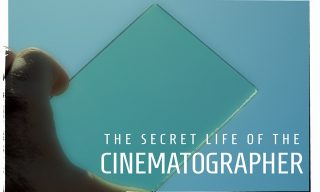 …are the Canon 30-300mm and Canon 30-105mm. When working with stretched budgets I need to be careful how precious production dollars are spent. Choosing the 30-105mm on a recent job allowed me to get an Arri Alexa over a Sony F5 as the lens cost savings tipped the package over a crucial threshold. These Canons tend to be about 25% cheaper than other comparable zooms, so they are a great choice if one can work within their limitations.

I’m not sure they’re the sharpest lenses in the world, but they aren’t exactly soft either. In a recent lens comparison test I discovered that their color response matched Cooke S4 primes better than did Leica primes or Angenieux zooms: they tend to be a bit warm, which always looks good on faces. They also show a fair bit of barrel distortion, but I prefer to see that on vertical lines rather than the opposite, which is what I get when shooting mid-range on an Optima zoom. Pin cushion distortion makes faces look thinner, but as we often shoot faces against backgrounds containing vertical lines I find slightly wider faces less disturbing than vertical lines that bend toward the center of the frame.

The 30-105mm focuses to 2’, which is really handy in a zoom. That’s where most mid-range primes focus anyway. The 30-300mm is a different beast, as minimum focus is 5’, but for most of what that lens is used for this isn’t an issue. (Most often I’ll use it as a closeup lens on a B-camera alongside the 30-105mm, although recently I used it on a commercial where we needed an affordable long lens for use with subject matter that didn’t lend itself to wide shots.)

The 30-300mm darkens considerably at the end of the zoom, but I think there’s some sort of indication on the barrel showing where this occurs—which no other zoom manufacturer is brave enough to admit, to the best of my knowledge. If you wonder why zooms dim at the end of their range, there’s an easy way to visualize what happens. Zoom all the way to 300mm and look at where the image of the aperture blades fall within the lens. This image is the entrance pupil, and it determines an awful lot about how a lens functions. This is the perspective center point of a lens, and at 300mm it falls way toward the back of the lens, very close to the camera. If you imagine yourself standing at that point and looking toward the front of the lens you’ll see that the edges of the very end of the lens barrel creep into your view, darkening the image around the edges. This is why all zoom lenses get a bit dark at the long end: the front entrance pupil falls so far back in the lens housing that it’s staring down a long tunnel, and at wide apertures the edges of that tunnel get in the way.

Closing down a few stops generally cleans this problem up nicely. Pick up any lens, open the stop all the way, and look through the lens. Move your head from side to side. You’ll notice that the edges of the lens barrel block your view when you look through the lens at a steep angle. Close down the stop, however, and you’ll find it much harder to see those edges. The more you use the center of the lens (by stopping down) the less the edges of the lens housing will impede your view. Vignetting usually goes away.

I developed a quick and dirty test to see where this vignetting resolves:

Tape a piece of copy paper over the front of the lens, or over the matte box. Light the paper evenly (aiming the lens at a fluorescent fixture in the ceiling works just fine). Open the stop to wide open and look at what happens to a luma waveform when you do so: there’ll be a bulge in the middle but the sides will drop off, indicating vignetting. Close the stop down so the waveform trace becomes as flat as it’s going to get, and that’s where the lens will start delivering an even field. 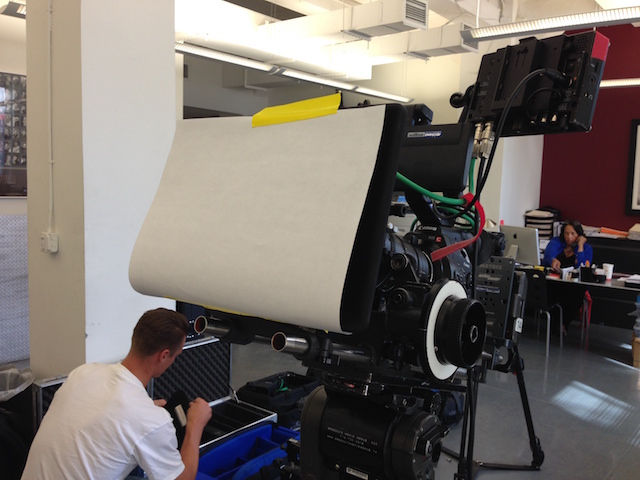 My fast and dirty vignetting test setup. I don’t remember which lens this is as this photo is from a job I shot in New York back in 2014. (Camera assistant Michael Lindemuth is patiently working around me during the prep.) 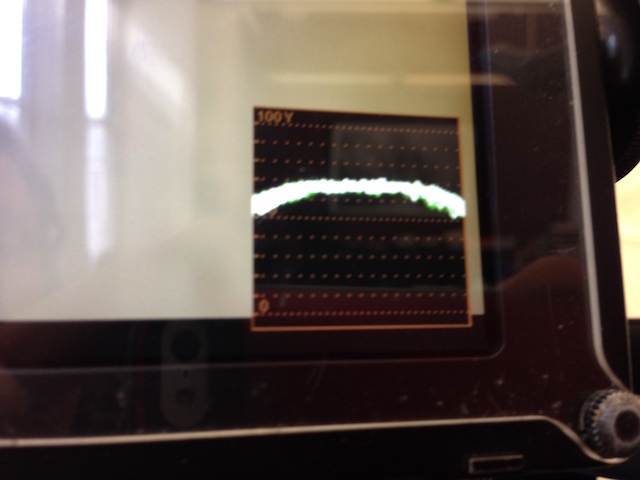 This is what the lens looks with the aperture wide open. Vignetting is fairly obvious on the waveform. The lens is probably zoomed all the way in as this is the best way to see the “worst case scenario.” 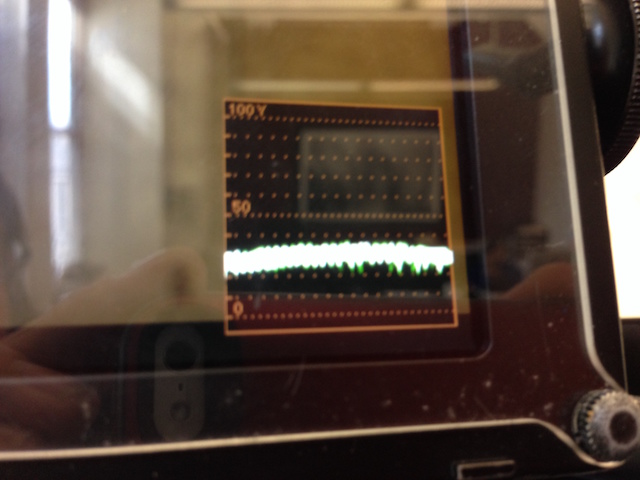 Closing down a stop or two results in a much more even field of brightness across the image. The rule of thumb used to be that lenses were sharpest, with the most contrast and the least vignetting, at about 2 2/3 stops closed down from wide open. My experiments with modern lenses have shown that the worst defects disappear when closing down only about one stop.

WHAT’S THE PROPER GAMMA FOR AN ON-SET MONITOR?

The BT.1886 display standard is a bit of a head scratcher for me. I’m not terribly good at math, so I tend to gloss over formulas while looking for the big picture summary of what they’re meant to do.

What I’ve discovered so far is that BT.1886 attempts to coerce nearly any display to come as close as it can to the original intent of the image regardless of its black and white levels. OLED monitors have extremely deep blacks while LCD panels show fairly light blacks, yet somehow an image must look roughly the same on both of them. The formulas in BT.1886 provide inputs for different maximum white and black levels.

Elsewhere on the web I’ve run into additional information. Apparently a gamma of 2.4 is meant to be used when a monitor’s black is extremely black (OLED), whereas 2.2 is more appropriate when blacks tend to be a bit lighter (LCD). I’m seeking confirmation but this seems to make sense, as contrast can increase as the dynamic range of a display increases.

I also learned that, while Rec 709 defines an encoding gamma of 2.2 at the camera head, there was until recently no suggested display gamma definition. A survey of post houses showed that most reference monitors, whose blacks are fairly deep, were set for a gamma of 2.4 more often than not, so that became the new recommendation. Resetting a Sony OLED (such as my current on-set favorite, the Son PVM-A170) will cause it to default to a gamma of 2.4.

THE EVILS OF FLICKER

Recently, for the first time in a quite a long time, I shot a job entirely using tungsten units. After shooting a bedroom scene my DIT called me over: “The lamp on the dresser is flickering like crazy!” Sure enough, it was: we’d been shooting at 48fps with a 180 degree shutter, and the wall behind a table lamp was pulsing like mad! We shot some quick tests at different shutter angles and found that the lamp still flickered slightly with a 144-degree shutter, which should put it smack in the middle of the flicker free window.

I’ve been paranoid about flicker ever since the first time I shot with a RED ONE and found that one of my HMI ballasts had gone bad. I couldn’t see the flicker on the monitor, but I could sure see it in post: rolling shutter flicker appears as roll bars, and sometimes they can be thin enough and dim enough that they aren’t visible on set. Part of this may be the viewing conditions, but I think another possibility is that most on-set monitors have low pixel response times, which makes flicker harder to see. Post monitors, however, don’t seem to have this problem. Flicker can often be seen on a waveform monitor more easily than on a set monitor.

I have no idea why this Sylvania 60w incandescent bulb flickered the way it did. Maybe this particular type of bulb has an extra thin filament that dims enough between AC cycles to flicker noticeably. Whatever the reason, I’m going to be more careful in the future. Whenever possible I’ll shoot at a shutter speed that puts me in the middle of the 60hz flicker free window. (This is still no guarantee: when we shot a test at 48fps with a 144-degree shutter we still saw subtle flicker.) I habitually shoot 23.98fps at a 144-degree shutter anyway, but in this one case I figured I could go back to 180 and pick up 1/3 of a stop of exposure. Never again!

Unfortunately this is just one more thing to warn production about at the start of a high speed job. Any practical bulbs on set will have to be tested at the desired shooting speed, or replaced with bulbs that don’t show any flicker issues at common high speed frame rates. I guess I’ve got another round of testing to do before my next high speed job!

I wrote an article about the hows and whys of flicker a few years ago. Check it out!