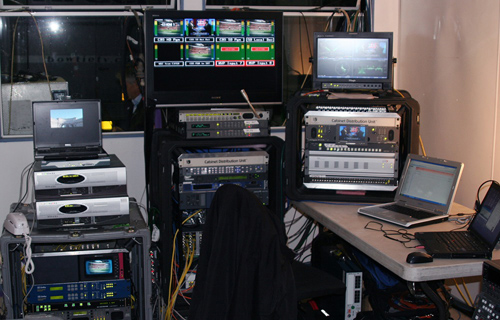 From football to ice hockey, the challenge in broadcasting sports is that there are a lot of objects moving quickly in different directions at the same time. “The FOR-A FRC-7000 handles fast moving objects far better than other converters I have used,” said Andy Grant, Chief Executive and Senior Engineer at Galaxy Light & Power. “You have more control over it in terms of optimizing settings for each kind of material. We found settings that will give a virtually transparent conversion for American football.”

Galaxy Light & Power worked independently with the NFL to provide an additional converter for instant replay feeds, and the outside broadcast facilities provider, CTV, wanted two additional converters to provide local news feeds within the United States and backup feeds. There were a total of five frame rate converters on site, all of them Galaxy’s FOR-A FRC-7000s.

According to Grant, the technical team at CBS was very pleased with the high quality of the conversion. “FOR-A converters are their first choice for this kind of work,” he said. “This is the second year we’ve done it. CBS was impressed with the work we did last year, hence we’ve been asked to do it this year. I like working with the FOR-A FRC-7000 because it is reliable and produces a consistently high quality conversion.”