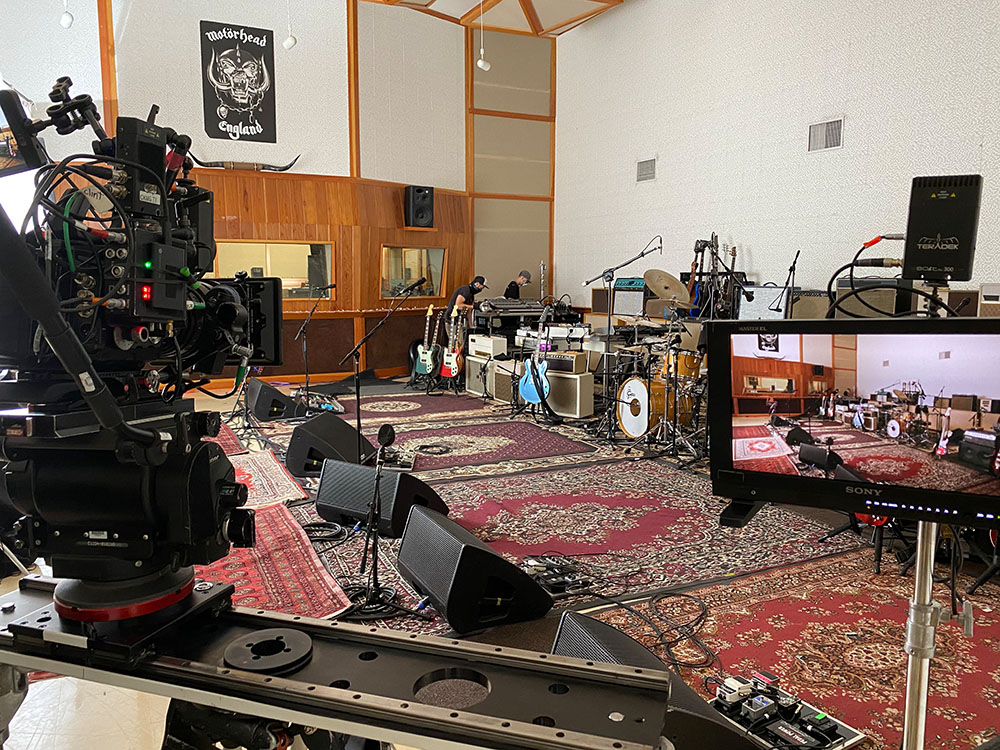 Most people don’t get enough time to test out camera equipment before it’s put into use. During his eighteen-year career at Panavision, though, cinematographer Michael Dallatorre spent a lot of time doing exactly that, taking what he describes as “lenses in their rawest form, all unfinished aluminium, and literally any camera that came in. I tested seven different digital cameras, just so internally we had an idea what things looked like.” Only a brave manufacturer, then, might ask for Dallatorre’s opinion of a new design, but that’s what Blackmagic did with its new 12K Ursa Mini Pro. And yes, for the sake of full disclosure, that means the camera we’re talking about here was supplied free of charge, though Dallatorre lost no time in putting it through the wringer and finished up by taking it out on a job for none less than Foo Fighters.

“Initially, with the Ursa 12K, I was doing a lot of the basic scientific tests,” Dallatorre says. “Charts, colors, things like that. All that stuff is good until you have to actually use it on a set and battle with all the elements you normally have to. The lights that are around, people’s skintones.” Here, he makes a flattering comparison: “the biggest point of this camera I think is its colour rendition. It reminds me of the Genesis, just because [Genesis] had an RGB stripe, where it had two reds, two greens and two blues in one pixel. Although the Genesis didn’t have the latitude of these modern cameras the color was great. The Ursa 12K reminded me of that.”

Praise indeed. Still, moving from, as Dallatorre puts it, the basic scientific tests to shooting a comedy short for Foo Fighters naturally involves a few contacts and a bit of good timing. “It was definitely one of these fun buddy projects. [Foo Fighters founder] Dave Grohl comes up with these ideas and he has the people around him who help him execute them.” The concept was a parody of pharmaceutical commercials which spend as much time listing side-effects as they do benefits, and it was organised on the slimmest of lead times. “It was literally a call on Monday and they said ‘we want to shoot this thing on Wednesday, are you available? They’d announced their tenth album two weeks ago and it was something to spark some attention.” 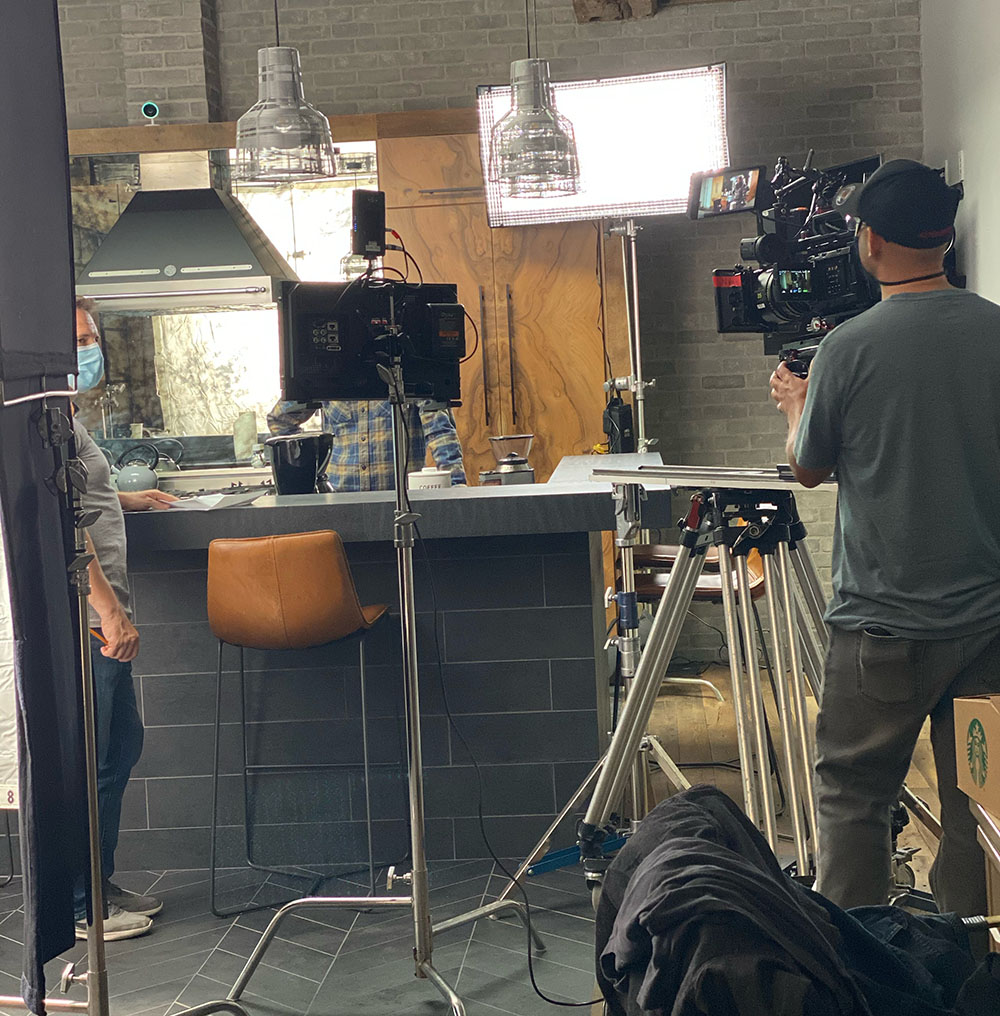 It was an ideal opportunity to try the 12K. “I thought, great, we can load it up with all the accessories I would need and treat it as a field test. For a full production camera you’re going to need your follow focus, your focus assist utilities, remote video monitors. So, we loaded it up pretty good and we rented all the additional gear, a set of master primes and really beefed it up to what I’m used to. I bought a little cage for it to have more rosettes and thing and 3/8 and 1/4-20 adapters. Other than that but it felt like any production camera I used on any set.”

“It was the essential pharmaceutical ad,” Dallatorre continues. “Slow motion. Handheld-y, vignettes of Dave in these different moments battling his coffee addiction. I looked at a bunch of commercials like that to get the feeling.” The piece was shot at Foo Fighters’ Studio 606 in Los Angeles, and with the majority of band members available for only around an hour Dallatorre made the very practical decision to shoot in 4K resolution, using the constant-quality Blackmagic Raw codec. “We had Dave for the entire day, but we had the band for a smaller amount of time so the last thing we wanted to do was to run out of storage space. We shot everything at 96 frames per second, and 96 at 12K on a 512GB card is like three minutes. We literally shot the guys out in less than an hour and loaded up a bunch of cards and drives. We wouldn’t have been able to do that if we were doing high speed at 12K.”

With his lens selection freed up by the camera’s modestly-sized Super-35mm sensor, Dallatorre chose Master Primes, suggesting that “they lean a little toward the blue, but what’s also a factor in color is the ND filters. The internal NDs are awesome, but we still used front NDs because sometimes you need nine stops, which is between the six and the twelve, so we’ll add an ND3. Those are always all over the place. What I’ve done before, when you have more prep and more time, is shoot a grey card with the ND filters on a handful of the lenses and then look it over to make sure there isn’t one that shows up a little more. I feel like they always show up a little more magenta.” That subtle magenta tint, Dallatorre notes, might also be a side-effect of infra-red pollution, especially with lots of ND. “In the color correction I had to adjust for that, and I could tell it was the filter because it changed between setups.”

It hardly bears repeating that nobody is delivering 12K material (though let’s not give the TV manufacturers anything to get excited about). Even so, oversampling, as any information theorist would tell us, has a lot of benefits. Noise is attenuated; aliasing is averaged-out; sharpness rises. Colour errors that bedevil traditional Bayer imagers will inevitably have some equivalent in Blackmagic’s non-Bayer design, but at such high resolution they, too, are minimised 4K output.

Pandemic permitting, Dallatorre concludes, “I’m going to probably use it on a short that’s coming up in December, I wanted to give [Blackmagic] another like real-world experience with the camera. I wanted to put it on something where I’m going to run it through the gamut of being on a production that shoots five days at least and has multiple system setups, gimbal, Steadicam, handheld. That’s something we’d do at Panavision. We’d get camera systems and say ‘that’s great but you need to add this, this and this.’ It worked perfectly, but I’d like to put it on something bigger. I think it looks really good.”