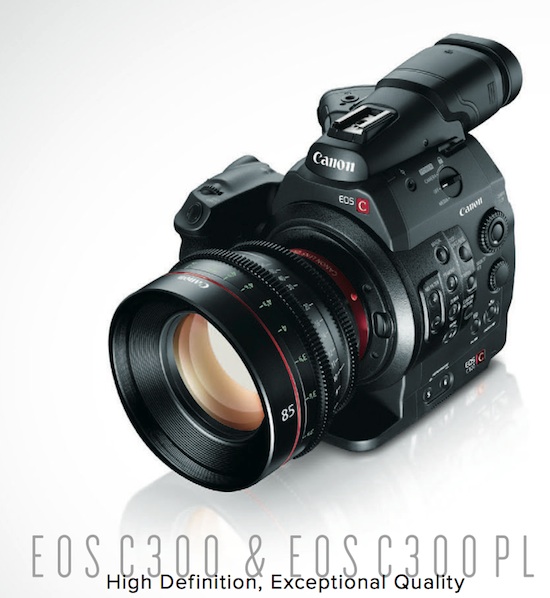 Today in Hollywood Canon announced their first truly professional cinema class camera – a Super35mm sized 4K sensor in a small, 3.6 lb body available with either EOS or PL mounts, recording to CF cards with an ISO range of 320 to 20,000. That is the good news. Everything else is either as expected or disappointing, depending on how fanboy hyped up you were about it. Is it a competitor for Red One? Scarlet-X? Epic? Sony’s F3? Read on and see.

The base C300 uses an EOS mount, and the EOS C300 PL uses a…you guessed it, a PL mount for traditional cine lens mounting.

Canon has successfully bridged the gap between their still camera based HDSLR world and true professional video cameras with the the C300 models.

Canon breaks no new technological ground with the specs on this camera, nor do they keep up with other players on the field – there’s no RAW recording, no full res stills recording, no 4:4:4, no 1080p60, no OMG awesome new tech.

There is SDI output – so you can dodge around the MPEG-2 compression, so that’s good. Time to get a Convergent Devices, AJA KiPro, Gemini, BlackMagic, or other onboard recorder in your future.

Basically, this looks like Canon took aim at the Sony F3, as it is not a Red One MX nor Epic competitor. Furthering those thoughts:

Overall, I’d say this is great news for Canon, and an “Oh, gee, that’s nice.” for the buying market. THAT SAID, I HAVEN’T SEEN IMAGE QUALITY SO THAT COULD BE A LARGE FACTOR. I’ll see it tomorrow myself and be able to evaluate from there.

For me, these make up the difference between “OK, that makes sense, that is totally in line with the current market but doesn’t really shake anything up.” and “OK, this is a Big Deal.” The only potentially Big Deal portions of this are the size/price/form factor, the EOS lens compatibility, and the potential for some great low light performance (reported but I haven’t seen it to say) as well as other image quality attributes I can’t comment on since I haven’t seen them. Tomorrow, I may be totally blown away and impressed. Tonight, I am not. I’ll be at their press event tomorrow to see for myself.

As far as Red goes…..this is not really competition (again, image quality and low light performance aside). The C300 is lighter and less expensive, but does not compete on frame rates or resolution or form factor or recording options (Redcode will kick the snot out of 50mbit). That said, all cameras are a horses for courses kind of a thing, and there may well be a ton of people for whom this size, price, form factor, and recording options will make them entirely happy.

More details, in no particular order:

-has a log gamma recording option to extend dynamic range for post production color manipulation – but how well would that hold up with the 50mbit recording? I’d record to a Gemini/KiPro/Convergent box for that myself. This is a feature match for the F3’s S-log.

-NO auto exposure or auto focus – OUCH. Really, Canon? REALLY? On your own damn camera and your own damn mount? The 5D/7D/1D can all (poorly, slowly) autofocus, so why not this one?

LENSES
-zoom lenses – 14.5-60mm, T2.6, in either EOS or PL mount
-other is 30-300, T2.95-3.7 (meaning you can’t do a long zoom in without darkening the image) – both $45,000 MSRP. Yeah – that part – putting together a system, doesn’t really matter whether you’re $10K or $30K for the camera body so much if you’re dropping $90K on glass. But the advantage is that these lenses will be made in both PL and EOS configs – so buy the EOS body (and why aren’t they modular, so you could buy one body and swap mounts???), and use your EOS (relatively) cheap lenses for doofing around and small projects, but rent Real Glass for Real Projects that have Real Budgets.

Once again it is a block of a camera. Detachable side handle/grip, but how feasible will that be with a “real” lens on it? At least the body is lightweight. 3rd party shoulder mount rigs? GO!

I DO like that there is now a Hollywood based support center for Canon – THAT is truly great and I applaud them for it.

Various PDFs may be downloaded by clicking here.

I’ve previously ranted about weak onboard codecs (here’s lookin’ at you, Sony F3!), so I’ll just say….meh. I’m bored with ranting on this topic, but come ON vendors, if I can go out and by a ProResHQ 4:2:2 i-frame outboard codec box for $2000 as an external device (AJA KiPro Mini, I’m lookin’ at YOU), GET YER GAME ON, CAMERA MAKERS! You no longer control the recording format as you once did. Although in this case, this may be the best codec they HAVE. Sony can’t use that excuse.

Another advantage I should have mentioned earlier – rolling shutter should be pretty much gone on this camera (or at least in league with other similarly priced cameras), as well as line skipping aliasing problems. But at this price point, they damn well better be.

Weight – PL model is 3.6 pounds for body ONLY, no battery/grip/lens – but that is light!

Overall, does this look like a valid, nice camera at a viable price point? YES.

Is this an OMFG, raise the roof game changer to me? Not as far as I can tell so far, based on the features listed here.

Is this a huge, game changing deal for Canon? Absolutely – welcome to the pro leagues!

Is this a huge, game changer for the industry? Nope, this is Canon’s answer to the F3. Unless the image quality blows away the F3, the F3’s specs look nicer to me (after the upgrades), the size, weight, and mount options are the only benefit for the camera as far as I can tell.

OK, it has been over an hour since Red purportedly went live with their Scarlet coverage, I’m going to keep hitting refresh on my browser since I have yet to get the page to load since it went “live.”

OK, for existing EOS HDSLR shooters, this is a Big Deal, obviously, because you’ll be able to use your existing glass and skills and whatnot with this camera. If you have 3-6 times the budget of your last camera (5D Mk II or 1D MkIV), you can now have real timecode, real genlock, real audio inputs, real recording durations, infinite recording time (presuming the cards allow for hot rollover, which they should at this price point), vastly reduced rolling shutter and aliasing, and and and….so many improvements over the DSLRs.

However, I just went and finally saw what Red is offering with Scarlet-X, and it will be strong, STRONG competition…and includes a SMART EOS mount…that autofocuses. I’m writing that up now.

Yeah – Scarlet-X specs kick the C300 up and down the field…IF AND WHEN Red can ship it, in bulk, at this price, with accessories available, and get the Epic/Scarlet system bugs worked out (like, I dunno….playback from camera anyone? 9 months later?)

WITHOUT (notable disclaimer there) comparing image quality (which is the ultimate test and output), just looking at the specs, I’d say Canon would need to cut their price about in half to be price competitive with Scarlet-X. Half the delivered resolution, half the frame rates at a given resolution, less than half the codec, lesser EOS lens support (hello – the THIRD PARTY has autofocus, Canon doesn’t on their own lenses? LAME.), so forth and so on.

Upon further reflection at 2 in the morning – Canon would need to cut $10,000 to make it feature competitive with the Scarlet-X. Put back a few thousand for Canon loyalty, worldwide service, and the fact that it will likely ship in volume, reliably, work from the get-go, and other Big Company advantages. Even at $15K, Scarlet still smokes it feature for feature. I’m feeling like this is a miss here – why is it so expensive, Canon?

These have all been addressed with varying levels of success. OK, hooray for that!

So I picture this conversation going on at Canon headquarters:

“We fixed all those issues – great! How much more should we charge for this new camera, what with Red out there planning on a lower cost Scarlet camera, and Sony already ahead of us with the similar F3?”

Exec leans back and says:

“I got it. Red is some crazy billionaire upstart, lets just ignore them entirely. Sony is our REAL competitor, and their F3 is the REAL competition. Lets fail to meet their specs, but somehow charge more for our camera, even factoring in the F3 firmware upgrade.”

“But for our HDSLR customers, you’re saying the fix to the 5D MkII means we drop from full frame to APS-C, fix all the problems, then up the price by a factor of eight and a half?”

“Yep.” (walks out of flabbergasted room)

Verdict: FAIL. Unless Canon discounts this camera STEEPLY, and soon, I don’t think this camera will sell as well as they’d hoped. Canon must be banking on 5D/1D/7D owners looking for a comfy buy/rent upgrade path – otherwise this makes no damn sense. This camera is definitely specs-wise better than the Panasonic AF100, but not QUITE up to par with a firmware upgraded Sony F3. Yet it costs about what both of those competitors COMBINED would cost. Ouch. And the only direct, obvious benefits Canon has? EOS lens option, smaller/lighter body. Not enough.

(and as long as I’m complaining, Scarlet-X SHIPS STANDARD with an EOS mount that SUPPORTS AUTOFOCUS. And Canon’s DOESN’T. Flabbergastingly lazy, or foolish, or SOMETHING)

Their press event had filmmakers crowing about it (as all camera launches do), and they even got Martin Scorsese to crow about democratization of moviemaking (not everyone gets him!). But seems to completely ignore the “crazy billionaire” in the room – Red.

I’m not saying this is a bad camera – it actually looks pretty decent, and in a standalone world, the complaint list isn’t that long. But in comparison to what else is out there, and HAS been out there, and what will ship before this does…it just isn’t competitive.

Mitigating factors – this is being pushed as a digital cinema camera, but as fellow PVC writer Dan Carr put it, this is more a TV/doc/reality camera good fit. It doesn’t offer a high quality onboard recording option, but the option it does provide is low cost (CF cards) and records a LOT of it (50mbit runs about 23 GB/hr) – so for doc & reality work, this camera will be great – provided you’re OK with manually focus/iris adjusting. Hmm…so maybe doc work, run and gun seems like it’d be a challenge for a single operator to stay on top of in varying lighting conditions. And for post, Final Cut Pro 7 had a plugin for the XF codec – so I’d imagine fairly quick to work with.

For digital cinema work, the higher resolution, better quality codec, HDRx, and other Scarlet-X advantages start to come into play. You’re likely to not have as much footage, be more willing to spend time (and money, hello RedRocket card!) to convert and grade it for those jobs as well.

Cost of recording, storing, and prepping for editorial will definitely be lower for the Canon – but lower quality as well.