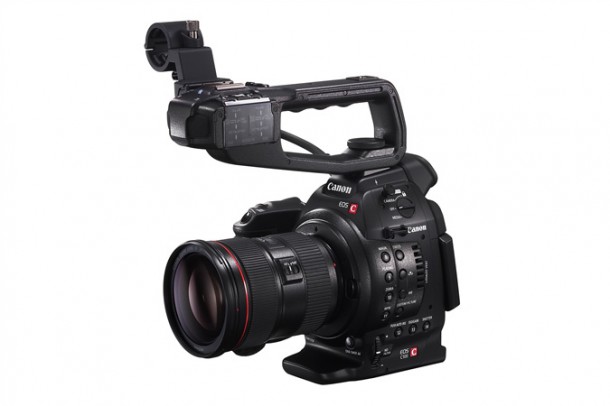 Less than a year after the launch of Canon's Cinema EOS system they have announced the third camera in the lineup, the C100. Positioned at the opposite end of the lineup to the new 4k C500, the C100 shrinks the same form factor and adds a few new features designed to make this HD camera the choice for one-man operations such as news gathering and documentary work. With a list price of $8000 it now fills the void between DSLRs and the C300 and will be available this November alongside the previously-announced C500.{C}

When Canon launched the C300 back in November of 2011 I had the opportunity to interview Eric Allen, one of Canon's product developers on that project. At the time I questioned Eric on whether the Cinema EOS 4k DSLR was the camera designed to be a stepping stone up from the DSLR world and his reply was definitively no. The assumption that myself and many others made was that in time there would be a product that fitted beneath the C300 in terms of pricing, and indeed the main complaint about the C300 was the perceived high pricing. Canon also never shied away from saying that the C300 was just the beginning, and surprised many at NAB this year when the 4K ready C500 was unveiled just a few months after the C300 had started to ship. Just five months down the road we now have the third camera to complete what I think we can now call a lineup. 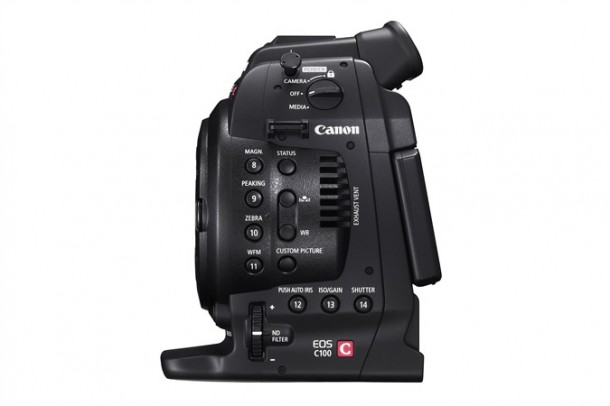 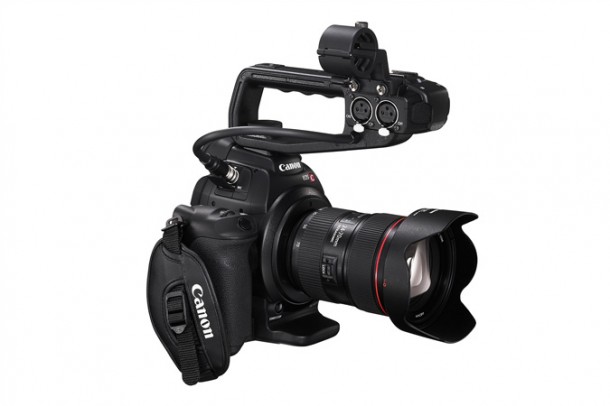 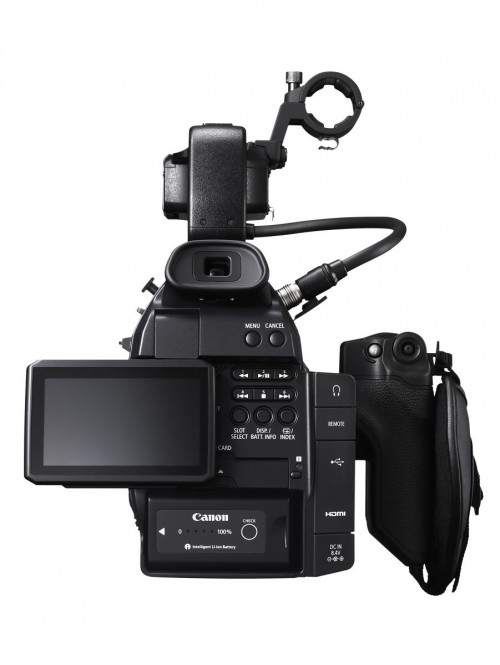 From an ergonomic standpoint Canon have kept things fairly similar to their other cameras and maintained things like the built in ND filters and removable side handle. My biggest complaint about the C300's physical design was the inclusion of the LCD screen as part of the removable top handle and this problem has been remedied by moving the screen to the back of the camera instead. The top handle now features an integrated stereo microphone as well as the dual XLR inputs and they have maintained the 3.5mm mic input for those that want to go super low profile with their system using something like a RODE Videomic Pro.

Canon's press release also notes the inclusion of an auto exposure button and interestingly an auto focus mode labelled as One Shot AF. It's my understanding, from reading information posted to Canon's European CPN site that this mode is not a continuous mode as some people have reported, but simply a pre-record auto focus. The user would press the AF button, at which point the screen will display and then focus on a 100% view of the central part of the image, most likely using contrast detect AF similar to that seen in liveview with Canon's DSLRs. A continuous focus mode was seen in the video function of Canon's recent EOS-M announcement but all reports of that so far suggest it leaves a lot to be desired and Canon were probably right in leaving that off the table for this camera at the moment.

HD-SDI connections are missing, though all is not lost for multi-cam shooters as timecode is available embedded in the HDMI output, as well as 2:3 pull down. Whilst a 24Mbps AVCHD signal is not quite up to par with a 50Mbps MPEG-4 signal from the C300, the ability to record uncompressed from the HDMI using Canon's log gamma will be a budget friendly way to get a decent gradable image for low budget productions.

Most conspicuous in its absence is any ability at all to record slow motion footage. In a time when sub $1000 DSLRs can shoot 1080p 60, you'd think this would be a no-brainer. Do they really not want to undercut the features of the bigger brother C300 (only capable of 720p 60) that much that they would cripple the C100's performance in that fashion? It seems even stranger when you consider that the C100's main competition in the marketplace will be the Sony FS700, a camera that has several high speed modes capable of shooting up to 240fps at HD. Whilst I appreciate that news gathering and documentary shooters rarely need to overcrank, to not even offer 720p 60 which has been available in all their DSLRs from the 7D onwards, seems like backwards logic and is already generating some backlash from other industry pundits. In fact it seems to be the only really negative thing in the specs of this camera.

DSLR Vs C100 – The inevitable comparison

More than 18 months ago I wrote an article detailing why I though that the predicted convergence of stills and video cameras would never happen. At the time convergence was the buzz word but the requested features from stills and video shooters were just too different to make it work. Jump ahead nine months from that post and Canon confirmed my suspicions with the launch of the C300 and a dedicated Cinema EOS lineup and now we have what I would call the camera that filmmakers wished the 5d Mark 3 had been. A small form-factor, large sensor camera with built in professional audio options and a repositionable EVF and LCD screen.

You have to ask the question now, why would you shoot anything professional with a DSLR ?

The $8000 list price is likely to become closer to $7000 by the time it becomes a street price and if you add up the value of all the accessories you need to kit out a DSLR for professional application ( or at least similar spec to what the C100 offers) then you will quickly get in the same ballpark, if not more.

And after that big shopping list you'll be left with an un-ergonmic mess of cables and trinkets that won't shoot an image half as crisp as what Canon's Super 35mm sensor is capable of. Unless you specifically want the full frame look, or positively need a camera that does both stills and video then to me this camera draws a new line in the sand. There's no longer a need to shoot with a DSLR for professional applications. Of course people are shooting many small commercial projects on basic DSLR setups and more power to them, but I'm referring to big, messy DSLR rigs on sets. They should now be on their way out.

I wasn't so convinced this time had come when Sony released the FS700 though because that camera is still quite large and requires a little finessing to get it into a comfortably shootable rig in my opinion, but at least with the C100 Canon have recognized and remembered one of the major things that got many people into shooting with DSLRs in the first place, the small form factor. This is a small, lightweight camera that is ready to go into documentary production right out of the box. 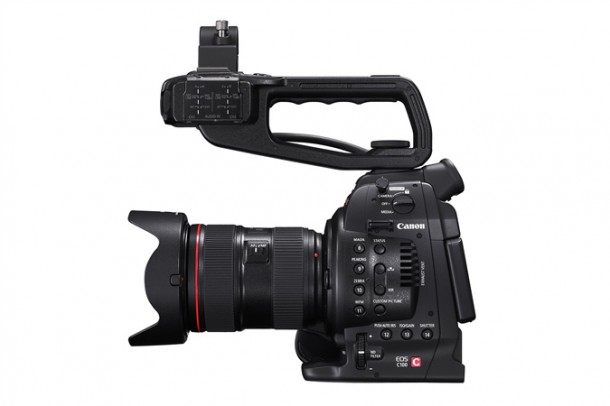 LAKE SUCCESS, N.Y., August 29, 2012 – Canon U.S.A., Inc., a leader in digital imaging solutions, continues its commitment to the advancement of tools for visual expression and expand its contribution to cinematic culture with the introduction of the new EOS C500 4K Digital Cinema Camera* and the EOS C100 Digital Video Camera*. The C500 will take its place as the flagship camera model in Canon's Cinema EOS System while the C100 provides another option for beginning filmmakers working on a budget. The C500 is Canon's high-end professional 4K (4096 x 2160-pixel) cinema camera capable of originating uncompressed RAW output for external recording to meet the demands of premium cinematic productions and other top-quality production markets. The C100 digital video camera is a compact, affordable entry-level model delivering full 1920-1080 HD video and integrating the popular AVCHD codec for universal compatibility with laptop and desktop editing systems. The C500 will be available in both EF- and PL-mount versions; while the C100 will be offered in EF mount only and will be compatible with the more than 70 zoom and prime lenses in Canon's EF, EF-S and EF Cinema lens lineups. All products in the Canon Cinema EOS line are engineered to provide exceptional image creation capabilities for professionals in the motion picture, television, and other diverse high-resolution digital production industries.

“We developed the Cinema EOS C500 digital cinema camera to deliver the benefits of full 4K motion capture to Hollywood's premier filmmakers, while the C100 is designed for economical productions that need sophisticated HD capabilities and optical lens diversity. As we said in November of 2011, the C300 was just the beginning to our Cinema EOS system and we now offer a more complete system of imaging solutions with a range of cameras for every level of production,” stated Yuichi Ishizuka, executive vice president and general manager, Imaging Technologies and Communications Group, Canon U.S.A., Inc.

The Canon EOS C500 and C500 PL digital cinema cameras are designed to provide a versatile high-quality 4K imaging solution to high-end productions. High-quality 4K resolution imaging has become the new standard for advanced effects and is particularly important for big-budget motion pictures that include scenes compositing live-action cinematography with high-resolution computer-generated imagery. The C500 and C500 PL cameras output 4K resolution to external recorders as a 10-bit uncompressed RAW data stream, as well as offering the additional versatility of being able to output quad full-HD (3840 x 2160), 2K (2048 x 1080), full HD (1920 x 1080), and other imaging options. All of these digital image source formats fully conform to established SMPTE production standards. All 4K formats can be selected to operate from one to 60 frames per second. When shooting in 2K, the C500 and C500 PL cameras employ a 12-bit RGB 4:4:4 signal format from one to 60 frames-per-second (fps) as well. For high-speed shooting and slow motion capture the cameras can be set to a 10-bit YCrCb 4:2:2 mode, and can output 4K or 2K video up to 120 fps.

While outputting 4K or 2K video to an external recorder, the Canon EOS C500 and C500 PL digital cinema cameras simultaneously record a 50 Mbps Full HD video file in-camera to the user's choice of one or two CF cards. The 8-bit 4:2:2 in-camera recordings can be used as a proxy for offline editing of 4K projects, and they are also suitable for various projects that do not require 4K resolution. Equipped with Canon's exceptional Super 35mm 8.85-megapixel CMOS sensor, both C500 camera models are compatible with a wide range of interchangeable Canon lenses – the C500 is compatible with EF, EF-S and EF Cinema lenses for Canon SLR cameras, while the C500 PL is compatible with PL-mount EF Cinema lenses and other PL-mount lenses. Highly mobile and compact, the C500 digital cinema camera provides the same ergonomic features as the C300 model, with the exception of a fixed hand grip that incorporates a pair of 3G-SDI ports for 4K video output and another pair of video ports for monitoring purposes. Canon is working with several independent manufacturers of external video recorders to support smooth workflow options, and these recorders are expected to be available by the time the EOS C500 and C500 PL 4K digital cinema cameras ship to authorized dealers later this year.
One-Person Full HD With Automatic Functions

A cost-effective camera solution for a wide range of everyday users, the EOS C100 digital video camera is ideal for many full HD applications such as:

In addition to its ability to record to both SD cards simultaneously, or relay-record from one card to the other, the Canon C100 Cinema EOS camera can also output uncompressed digital HD to an external recording device via its locking HDMI connector. This HDMI output includes superimposed time code and 2:3 pull-down marker information. Additional outputs include a USB connector and stereo headphone jack.
Pricing and Availability