Canon pre-announces a firmware upgrade many have been asking for. 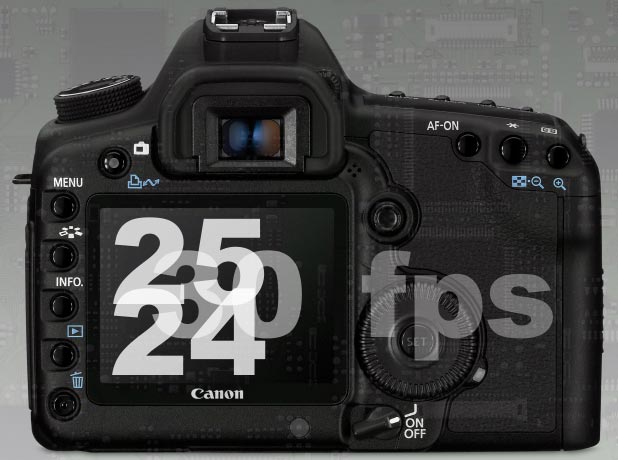 I like my Canon 5D Mark II – it shoots great stills, and it also shoots more than passable HD video. I’m personally a fan of working at frame rate of 30p, so I didn’t even mind this limitation all that much, but I have to admit I was irked when the 7D – and then the 1D Mark IV – were announced with a much wider range of frame rates (and frame sizes). So I was feeling considerably better about my purchase after Canon Europe, UK, and Australia announced a firmware update for the 5D that will support 24 and 25 fps HD capture (as of the time I write this, a search does not turn up a similar announcement on the Canon USA site – thus my delay in learning about it).

That’s the good news; now let’s look that gift horse in the mouth and discuss the bad news:

It’s interesting to note that the wizards over at the Magic Lantern project already had 24 fps on their feature request list; at least that’s one they can strike off as they work on other cool features such as full HD on HDMI while recording (not the 480i it currently switches down to).

Despite my complaints, it’s actually nice to see Canon putting forth the effort to do this. They’re still selling a boatload of 5Ds, plus they have two other new DSLRs that support HD capture to sell, so they could have sat on their hands – but they didn’t. Now if they would just throw money at Magic Lantern and integrate those features as well…