The DSC 102db chart doesn’t lie: This is what it tells us about how the 5D sees the world.

The Canon 5D does a remarkable job of making HD images, considering that it was originally never intended to do so. So how much dynamic range can it really capture? Thanks to the DSC 102db (17-stop) latitude chart, we now have an objective answer.

If you’ve read this article then you have a pretty good idea of how the DSC 102db chart works. The quick explanation is that this chart contains 18 steps, printed one stop apart, and by exposing the first chip so that it just hits the camera’s clip we can then count the following steps and see how many stops the sensor can see. (The reason the chart is backlit is because current print technologies only allow for about five stops worth of latitude when using ink on on a shiny white surface. Backlit charts allow for much greater dynamic range.) 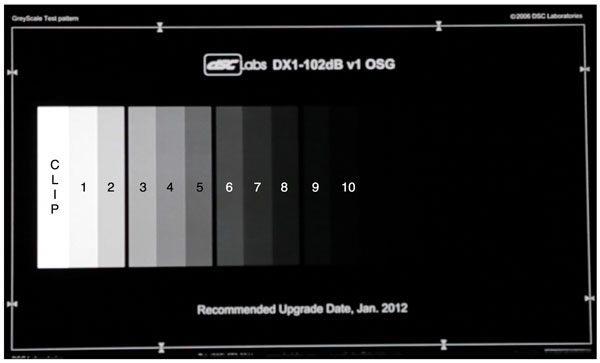 I’ve marked out the steps as I saw them, although I should point out that when I brought this image into Photoshop and turned off color profiling I saw a very faint 11th step just to the right of step 10. That doesn’t show up on the waveform, though: 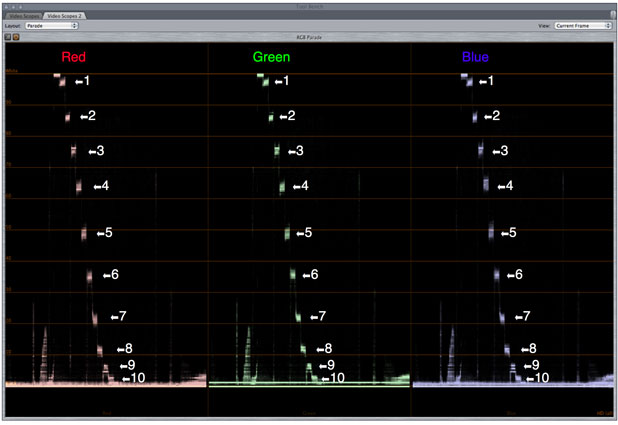 If you look very closely you can see that eleventh step as a bump in the noise below step ten. I don’t count that as usable, as any crushing of the blacks will wipe it out, but it’s there.

The one drawback of this test is that it tells us how much overall dynamic range a camera has, but doesn’t tell us how to use it. I’m working with DSC to see if we can develop a chart that does that. For now, though, know that the 5D will yield roughly ten stops of dynamic range

This test was shot with a Canon 5D set at ISO 400, f2.8 at 1/30th of a second exposure, set at the flattest possible contrast setting.

I’ll have more of these tests to show in the near future. It’s hard to get my hands on an Alexa at the moment, but a cursory glance at it shows that it does offer at least 13 stops and perhaps a nudge more. I hope to be able to prove that shortly.

Art Adams is a DP who has both a bright side and a dark side, and they are not very far apart. His website is at www.artadams.net.