The Canon Video Grant – Short Film Documentary aims to give a videographer and/or photographer a grant of 8 000 euros, endowed by Canon, plus the loan of a video kit, to produce a film. 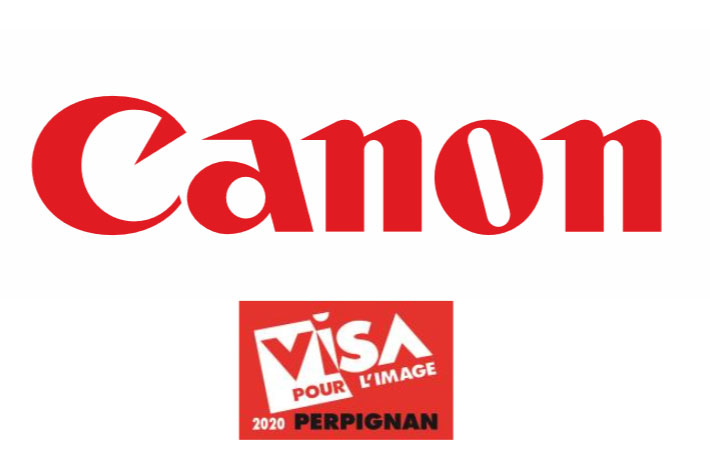 The Canon Video Grant – Short Film Documentary starts this year, and the first edition is accepting applications until April 15, 2020. The recipient of the grant will be selected in May.

Applicants must have completed at least one video reportage (broadcast or not), they must be professional photojournalists/documentary, speak and write in French of English and offer clear indication of the participation of each co-producer in the financing of the project. The participation rules, which those interested should download, point to the other conditions required to participate, namely a signed application form, a copy of the applicant’s identity card or passport and an affidavit stating that the candidate is a professional photojournalist (attestation of honor written by the photographer/videographer or from an agency, production company, media). 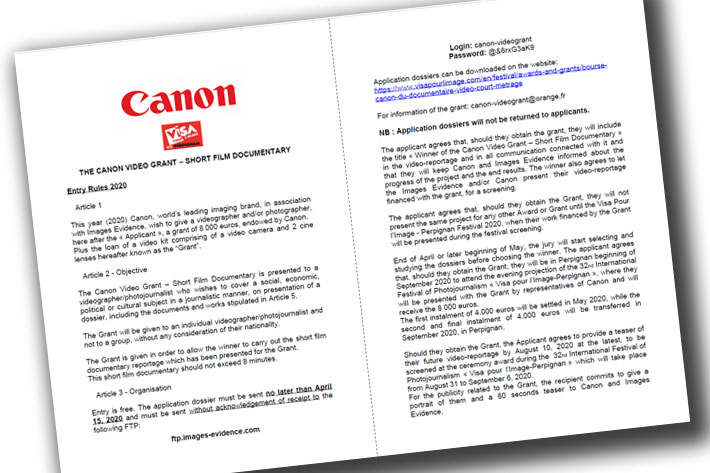 Apllicants must also indicate a projected budget for the video-reportage project for which the Grant is to be used if obtained as well as a complete financial estimate of its realization. Follow the link to download the document and note that the applications are only accepted until April 15, 2020. We’ve collected some key notes from the application document that are shared in the following paragraphs.

The Grant will be given to an individual videographer and photojournalist and not to a group, without any consideration of their nationality. The Grant is given in order to allow the winner to carry out the short film documentary reportage which has been presented for the Grant. This short film documentary should not exceed 8 minutes.

The applicant agrees that, should they obtain the grant, they will include the title « Winner of the Canon Video Grant – Short Film Documentary » in the video-reportage and in all communication connected with it and that they will keep Canon and Images Evidence informed about the progress of the project and the end results. The winner also agrees to let the Images Evidence and/or Canon present their video-reportage financed with the grant, for a screening.

End of April or later beginning of May, the jury will start selecting and studying the dossiers before choosing the winner. The applicant agrees that, should they obtain the Grant, they will be in Perpignan beginning of September 2020 to attend the evening projection of the 32nd International Festival of Photojournalism « Visa pour l’Image-Perpignan », where they will be presented with the Grant by representatives of Canon and will receive the 8 000 euros. The first installment of 4.000 euros will be settled in May 2020, while the second and final installment of 4.000 euros will be transferred in September 2020, in Perpignan.

Should they obtain the Grant, the Applicant agrees to provide a teaser of their future video-reportage by August 10, 2020 at the latest, to be screened at the ceremony award during the 32nd International Festival of Photojournalism « Visa pour l’Image-Perpignan » which will take place from August 31 to September 6, 2020. The complete and final video report will be screened in Perpignan one year later, in September 2021. The applicant agrees that, should they obtain the Grant, they will not present the same project for any other Award or Grant until the Visa Pour l’Image – Perpignan Festival 2020, when their work financed by the Grant will be presented during the festival screening.

Once the work has been completed, later on April 2021, they also commit to give an high-resolution version from the final project which will be screened during the 33rd International Festival of Photojournalism « Visa pour l’Image-Perpignan » in September 2021. With reference to the short-term loan of a Video Kit, the winner and Canon will identify the suitable Video Camera and the 2 lenses, (not exceeding the price of €15,000), to be returned latest to Canon on April 2021.

The Winner agrees not to reapply for a period of 5 years.