Full HD video at 60 frames per second is a footnote on the PowerShot G5 X and G9 X, new Canon cameras, both blinking an eye at stargazers and amateur astronomers. 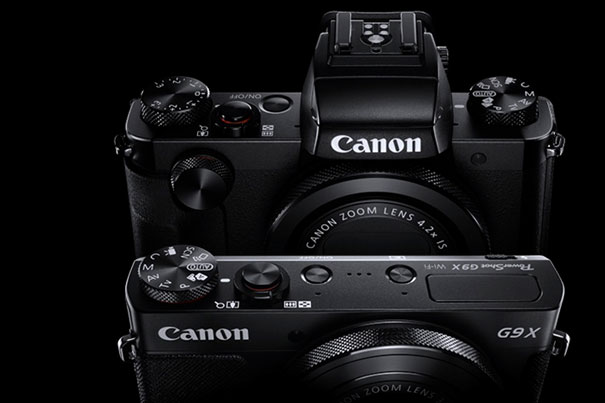 Canon is building a family of large sensor cameras – 1 inch – with the 5 PowerShot G-series cameras they now have in the market, with the launch of the new G5 X and G9 X.

Presented as the ideal choice for advanced amateur photographers looking for a highly portable, advanced point-and-shoot camera equipped with built-in Wi-Fi and NFC capability for easy sharing of images and video to social media networks as well as printing, the new models may be in the same family, but their view of the world is completely different.

In fact, while the PowerShot G5 X, as mentioned in our previous article, offers what Canon considers to be a bright, built-in high-resolution EVF that allows photographers to more easily compose and take pictures as well as track moving subjects, the PowerShot G9 X only offers a LCD – common these days – to compose your images, meaning you lose the stability, ease of composing and speed achievable when tracking moving subjects. 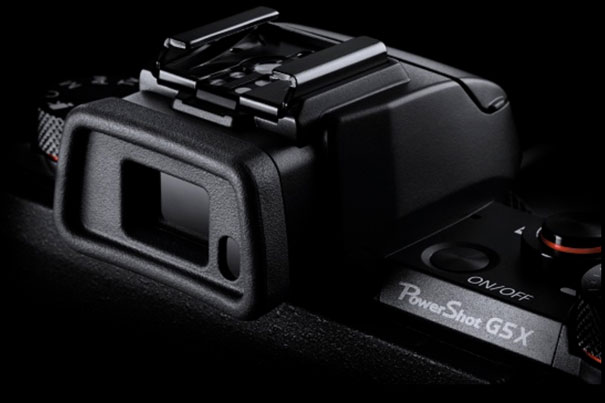 The PowerShot G5 X, according to the press-release finally available, offers the already mentioned electronic viewfinder, a first for Canon in their G-series. The 2.36-million-dot high-definition OLED electronic viewfinder provides high-quality viewing from edge-to-edge, especially useful when composing an image or shooting in bright sunlight. Additionally, a three-inch, 1.04 million dot touch panel LCD screen provides a bright, clear display that enables one-touch control of many camera settings and features a Vari-Angle design that enables easy viewing from various shooting angles while protecting the screen from inadvertent scratching when the camera is stored.

The camera also features a bright f/1.8 – f/2.8 4.2x Canon Optical Zoom Lens (focal length range equivalent to 24-100mm). With the combination of a nine-blade iris diaphragm for beautiful background blur effects and an Intelligent Image Stabilization (IS) system that provides virtually shake-free images in a wide variety of shooting conditions, this camera’s optical system enables users to capture the shot as they envisioned it and is ideal for shooting in low-light conditions or when a shallow depth-of-field is preferred for more dramatic, soft backgrounds and beautiful portraits. 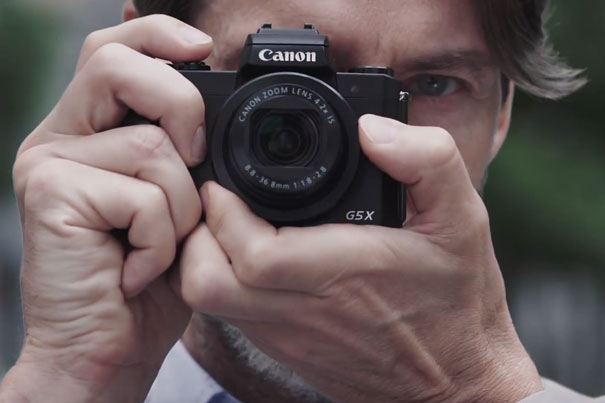 Housed in a classic black body, the enhanced controls include top-mounted mode and exposure compensation dials, front and rear control dials, and a control ring around the lens, which can all be customized to best suit different shooting styles. The PowerShot G5 X camera also features a built-in flash plus a dedicated hot shoe providing full compatibility with Canon’s powerful range of EX-series Speedlites and related accessories. There is also a 3.5mm mini-jack for compatibility with Canon’s Remote Switch RS-60E3.

The sensor, which is also present in the PowerShot G9 X, is a one-inch, 20.2 Megapixel High-Sensitivity CMOS sensor that delivers optimal performance with an ISO range of 125 – 12,800. The sensor, along with a proprietary DIGIC 6 Image processor, creates Canon’s HS System to provide photographers with vivid and detailed still images and video, even in difficult low-light shooting scenarios.

Slim and lightweight, the PowerShot G9 X is the camera photographers will want to show off to their friends as much as they shoot with it. The camera features a bright f/2.0 – f/4.9, 3x Canon Optical Zoom Lens (focal length range equivalent to 28-84mm) along with Canon’s Intelligent Image Stabilization (IS) system for virtually shake-free images in a wide variety of shooting conditions. 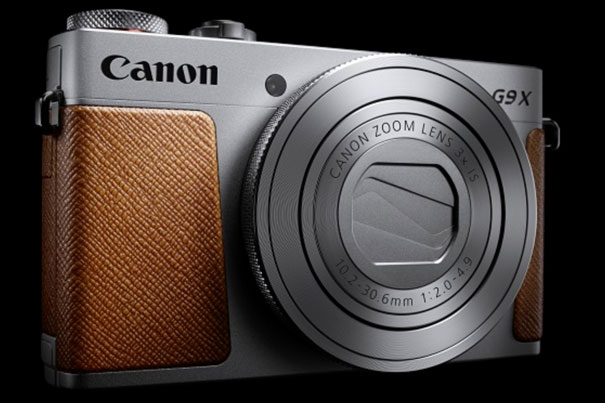 The camera’s intuitive three-inch LCD touch panel with a new user interface allows for quick and easy changes to camera settings even while taking pictures. In addition to the touch panel, a lens-mounted control ring can be utilized to adjust several functions, including customizable manual focus. For shooting fast-moving subjects from kids at birthday parties to athletic events, the PowerShot G9 X camera has continuous shooting speeds up to six frames per second (fps) so none of the action is missed. But there is no EVF, which Canon admits, in their own words “allows photographers to more easily compose and take pictures as well as track moving subjects.”

Well, maybe some people will never miss the EVF, especially for some types of photography. With or without EVF, this is a camera many will want to have and show their friends, for its old days style design paired with modern electronics. Available in classic black, or in a retro-style, silver-gray body with brown stitched leather accents, the PowerShot G9 X adds, as Canon says, style to their PowerShot line. 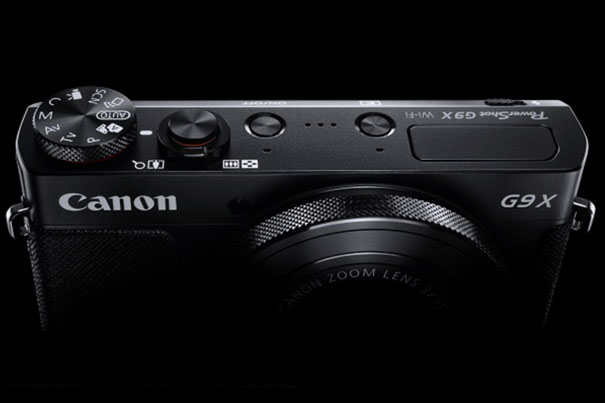 Both models offer what now seems to be a trend in the market: the option to capture star trails. These new cameras feature an enhanced Star Mode to provide more precise focusing sure to delight stargazers and amateur astronomers. The “Star Trails” mode is now enhanced to improve the breaks in light between star trails turning star movement into a luminous still image, while the “Star Time-Lapse Movie” mode makes beautiful video clips that show the movement of the stars against a static background of dark space. The beauty of being out with slide film or even a digital camera to try and catch the movement of stars is now gone forever, transformed into a mechanical thing. I bet not many people imagined this would be possible someday. And I am not sure it is a good thing, really. 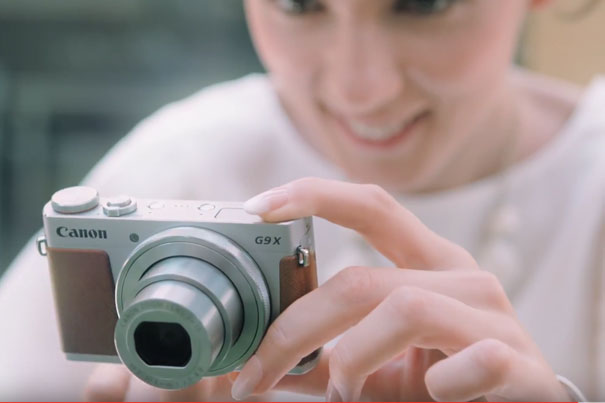 Both new PowerShot models incorporate a broad range of exposure modes from fully automatic to full manual, and both offer users the choice of RAW as well as JPEG recording modes for still photos. Additionally, both new models incorporate a built-in ND filter for enhanced exposure control in bright shooting conditions, something I do appreciate as it opens new options in terms of control, although I would like to know the exact amount of ND available. 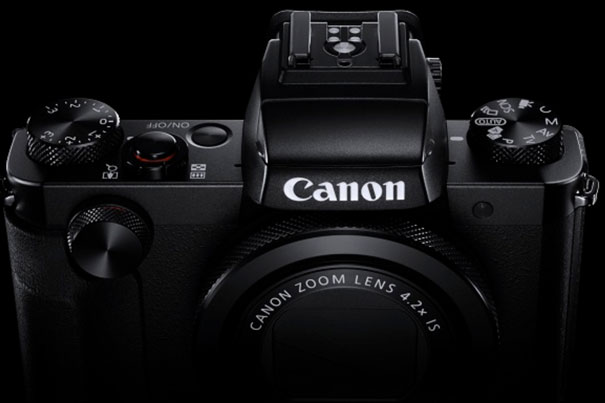 With a port for external microphone, the PowerShot G5 X seems to be more video orientated than the G9 X, although in terms of base specifications they share the same configuration:1080p Full HD video (at 24p, 30p, and 60p in MP4 format). Canon continues true to their idea that most users still do not need 4K, as mentioned in a previous article.

The PowerShot G5 X and PowerShot G9 X camera kits are scheduled to begin shipping in November 2015 at suggested retail prices of $799.99 and $529.99, respectively.