With 70 percent of the photographers at the recent Big Game between the teams from Carolina and Denver using Canon DSLRs, it’s easy to understand why Canon keeps creating cameras as the EOS-1D X Mark II. 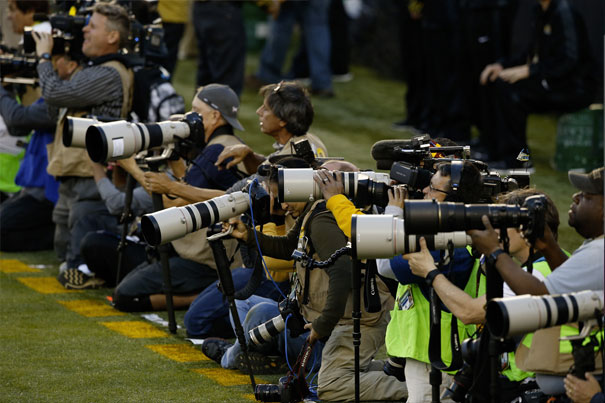 If DSLRs are dying, they’re having a very slow death, one could say. With the sidelines at the San Francisco stadium “painted” white from so many Canon lenses and cameras – 70 percent, according to a survey and data by Canon – the end does not seem to be near.

The Big Game between the teams from Carolina and Denver, made the top sports photographers from across the country gather in the San Francisco Bay Area for the coverage of the event. The stadium filled with Canon EOS DSLR cameras and the iconic white EF lenses, from the opening kickoff to the final whistle. In addition to the lenses on the sideline, Canon’s line of HD broadcast lenses were also used extensively to help deliver the game to more than 110 million television viewers.

Veteran sports photographers and Canon Explorers of Light Peter Read Miller and Damian Strohmeyer were on the sidelines using the brand-new EOS-1D X Mark II DSLR, in what was the first public use of the camera in the U.S. since being announced to the public on February 1. “The EOS-1D X Mark II is a marked improvement in file quality, and the performance was huge at higher ISO,” said Strohmeyer. “This camera is a big step up!”

“Seeing such a large number of the country’s most talented sports photographers choosing Canon equipment to photograph the country’s biggest sporting event of the year is always such a humbling honor for Canon. Their iconic images of the game will be seen by millions of people around the world for years to come, and this drives Canon to ensure both our products and support live up to the requirements and expectations of our loyal customers,” said Yuichi Ishizuka, president and COO, Canon U.S.A., Inc.

A full complement of friendly and knowledgeable staff from Canon Professional Services (CPS), a fixture at major sporting events throughout the year, were on site at the stadium for the entire weekend providing comprehensive equipment maintenance, extensive equipment loans and expert technical support to the major photo agencies and individual photographers covering the game. “The equipment loan from CPS really gave us some opportunities for our coverage we wouldn’t have otherwise,” said Carlos Avila Gonzalez, photo/video journalist for the San Francisco Chronicle. “When an event as large and globally renowned as this is in your area, you have to step up to deliver the kind of work that keeps readers and viewers engaged and constantly seeing your publication as the go-to source for visual content. Canon’s help with equipment allowed us to provide that kind of coverage.”

Canon Professional Services will be attending to photographers at over 32 events this year, including major sporting, auto racing, Hollywood, and political events throughout the year, indicates the company in the information provided. 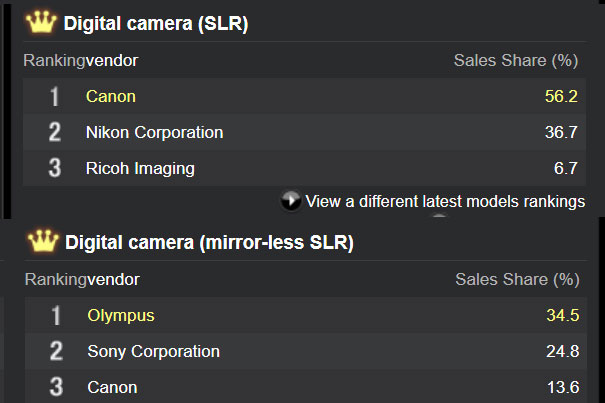 Back on the question of the future of DSLRs, are they a dying breed? If a recent BCN Awards ranking regarding sales in Japan is correct, probably not. When the numbers for 2015 were presented, recently, attention focused on the rising of Olympus numbers – 12 percent – in the mirrorless segment, and the unexpected rise of Canon to the third position, removing Panasonic from the top three. This is somehow puzzling, as Canon does not have many model choices when it comes to mirrorless cameras. Interesting to see, also, is that Sony lost almost 10% of the mirrorless market share and is now in the second position.

When it comes to DSLRs, though, Canon is on top, at a comfortable distance from Nikon, which is second (see image above). And Canon has been on the first position of the DSLR BCN Awards for eight consecutive years, as many as Nikon has been second. What this means is that the two DSLR brands most professionals use – please remember I am talking about DSLRs and no other system – continue on the right track… so there is no need for drastic changes. Sony was thgere in 2013, but they’ve abandoned the area altogether, leaving space for Pentax to rise, now under the Ricoh wing. That’s what those 6.7% represent. Meaning 83.9 percent of the DSLR market belong to three names. Not much competition there…

It should be noted that the numbers from BCN refer only to Japan, but as they represent about half of all sales data there, the annual numbers do show how the marketplace evolves in Japan.