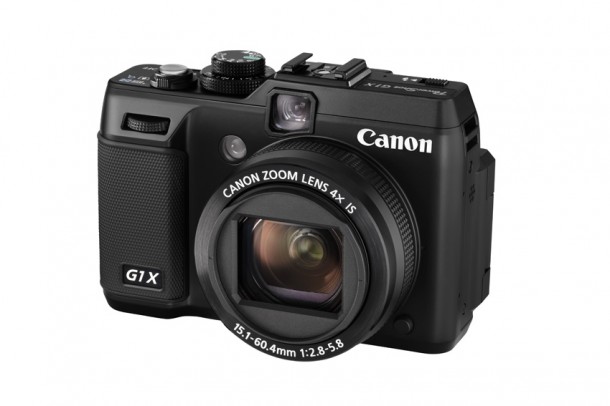 With the mirrorless camera market undeniably in expansion Canon have been the only major manufacturer not to join the party. Nikon took their time with the 1-Series and rather than battling it out with Olympus, Panasonic and Sony they decided to create their own space for the V1 and J1 cameras by implementing a much smaller sensor than Micro Four Thirds (or APS-C in the case of the Sony NEXs). This was a smart move on Nikons part as it likely prevented 1-series sales from cannibalizing lower end DSLR sales. What Canon have chosen to do though is entirely different…

I don’t often write about compact camera systems here on ProPhotoColition, let alone so-called point & shoot cameras. While the new Canon G1 X appears to have roots in the old G-Series that many know and love, there is one major difference, sensor size. The old G10, G11, G12 cameras were point and shoot cameras, there is no doubt about that. In the past couple of years their sales dwindled with the introduction os the Powershot S-Series cameras which featured largely the same internals and sensors but in a much smaller package than the G-Series. Canon needed to make a radical change and they did. The G1 X features a sensor that is 16% larger than a M 4/3 sensor and only marginally smaller than an APS-C sensor, fully 6.3 times larger than the sensor found in the previous G12. Essentially Canon have created the first mirrorless camera with a fixed zoom lens. 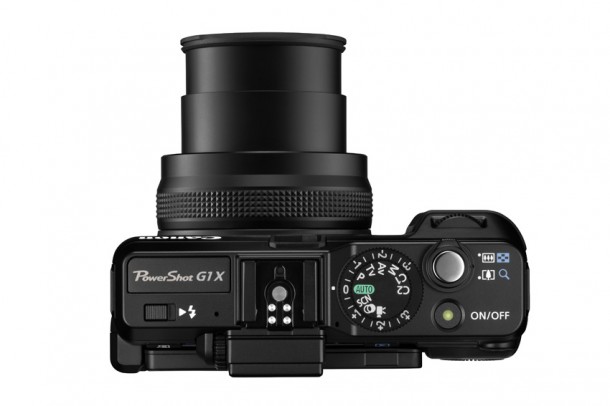 The camera is being marketed by Canon fairly heavily as the pro’s compact camera of choice. The perfect partner to a 1D X or other pro body. Is this a smart move ? I think it is. Pros tend to want to keep a camera on them at all times and are rarely satisfied by the quality of point and shoot cameras. The boom of mirrorless interchangeable lens cameras was interesting for me as I longed for something better than my P&S but I never found the right solution in the first couple of years. I just didn’t want to buy into a whole new system with a whole other set of lenses, it just seemed too redundant. Then Fuji came along with the X100 and it’s APS-C sensor with fixed lens. I jumped on it and I have been very happy. A simple, quality solution that didn’t require me to buy multiple lenses. The one drawback being of course that the fixed lens is very wide and sometimes limiting in that respect. 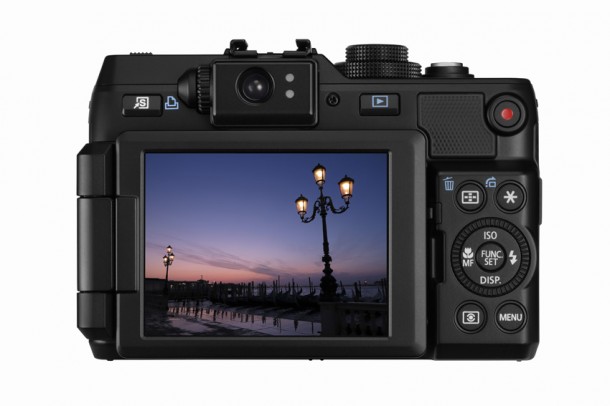 With the Canon G1 X though you will conceivably get comparable image quality and ISO performance but with a 28-112mm zoom lens. For me this IS an attractive proposition and I’m excited to try one out in the real world. The Fuji’s UI is terrible, as is the AF system and these are both areas where I expect the Canon to be much better. It shoots 1080p video and offers all the manual control that anyone could ask for in a camera. On top of that is is also much cheaper at $799. Now I don’t want to draw direct comparisons between the G1 X and the X100 , I’m merely mentioning it as this is what I have. In reality most people will be choosing between this and a M4/3 camera with a kit lens, where they intend the kit lens to remain on the camera for the duration of it’s life. 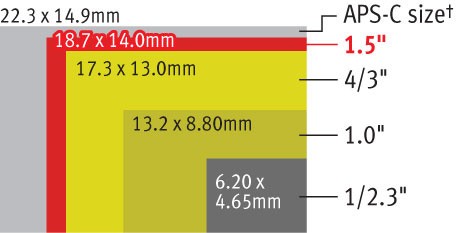 Like I said, it takes a special type of compact camera for me to decide that our predominantly pro audience needs to know more about it! The G1 X is an intriguing camera though and I think Canon have the right idea trying to market it to those people who already own DSLR systems and want an ‘everyday’ compare camera. You don’t often get a surprise in the industry these days with so many leaks on camera specifications. The launch of the G1 X was a nice surprise and I applaud Canon for going in a different direction and making their own room in the crowded lower end of the market. Stay tuned in the future for a more detailed report on this camera, I’ll definitely be picking one up to keep in my pocket.

A high-quality camera in its own right or the perfect complement to a professional DSLR, the PowerShot G1 X combines EOS sensor technology with DIGIC 5 processing power, a new precision Canon lens and extensive manual control – creating the finest compact camera Canon has ever produced. Designed to be highly portable, the PowerShot G1 X features a zoom lens which retracts into a discreet, robust metal body, providing photographers with an unimposing camera that delivers high quality images and superior handling.

The increased sensor size allows photographers to have greater control over the depth of field, with increased potential to creatively and artistically isolate a subject from its background. Improved dynamic range enables users to accurately capture shadows and highlights within the same frame, while the 14.3 Megapixel resolution allows for the output of large-sized prints, or permits images to be cropped for more powerful compositions.

Combining the large sensor with the DIGIC 5 image processor, the HS System in the PowerShot G1 X sets new standards for low-light performance, with a maximum fullresolution ISO range of 100 to 12800 – a level never before seen in a Canon compact. Photographers can shoot using the ambient light in even the darkest of conditions, capturing natural shots with incredible detail and low noise – providing a powerful basis for low-light photography.

Developed using the same design, manufacturing and quality processes as the world renowned EF lens range, the lens in the PowerShot G1 X is built to achieve professional levels of image quality. Utilising Ultra high refractive index Aspherical (UA) elements and precision glass moulding technology, the lens achieves both a compact size and pin-sharp clarity for the most discerning of photographers. The lens retracts compactly into the camera body while offering a flexible 4x optical zoom range of 28mm – 112mm, giving photographers the option to use the zoom creatively and change the framing and perspective of their shot. A 6 blade aperture also combines with the largesized sensor to produce beautiful background blur.

To help ensure optimum image and Full HD movie clarity, the lens features a 4-stop optical Image Stabilizer (IS), allowing photographers to shoot in darker conditions and use shutter speeds up to four stops slower than would be possible without IS. The optical Image Stabilizer is supported by Intelligent IS which analyses the focal length, focal distance and type of camera movement and applies the most appropriate Image Stabilizer mode1. For example, when a panning motion is detected, Panning IS is activated and stabilises in only one direction for more artistic capture of movement across the frame. Hybrid IS technology is also included to capture macro subjects without the blur associated with shift camera shake.

The lens also includes an in-built 3-stop Neutral Density (ND) Filter, permitting the use of wider apertures in bright light to achieve a shallower depth of field, or to use slower shutter speeds to intentionally blur motion.

Following on from the control historically offered by the PowerShot G-series, the PowerShot G1 X offers Full Manual Control with shooting mode and exposure compensation dials for quick and intuitive access to a range of settings. For maximum control over the final image, the PowerShot G1 X fits seamlessly into the EOS photographer’s workflow, supporting 14-bit RAW capture for smooth gradations and natural colours which can be fine-tuned using the supplied Digital Photo Professional (DPP) software.

The PowerShot G1 X supports Full HD (1080p) movie capture instantly at 24fps, via a dedicated movie button. Taking advantage of the camera’s large CMOS sensor, users can experience high quality movies, even in low light conditions, with the shallow depth of field associated with a larger sensor. Additionally, the 4x optical zoom can be used whilst filming, offering versatility, while stereo sound is also captured.

With its robust, stainless steel chassis and compact design, the PowerShot G1 X offers professional-quality handling. A large vari-angle, 7.5cm (3.0?) PureColor II VA LCD screen allows photographers to shoot from virtually any angle or position, to get the composition they desire. The bright, high-resolution, 920k dot LCD provides a sharp, detailed platform for image framing and review, while an optical viewfinder (OVF) with dioptre adjuster gives photographers the option to shoot according to their individual style. A newly-integrated manual pop-up flash provides the option to add additional light to a scene, and, using the hotshoe, external Canon Speedlite flashes can also be used.

A range of advanced shooting modes are provided to assist photographers in capturing challenging scenes and situations. When shooting in very dark conditions without a tripod for example, Handheld Night Scene captures a high-speed sequence of shots, combining the data to produce one well-exposed image with minimal blur.

Ideal for EOS DSLR users, the PowerShot G1 X is compatible with a range of EOS System accessories, allowing photographers to instantly expand the potential of the camera. Canon’s EX Speedlite flash units can be used for creative lighting, while the WP-DC44 waterproof case provides protection to a depth of 40m – ideal for shooting in the heavy rain or taking shots underwater – with full access to all controls.

An optional lens Filter Adapter, FA-DC58C, also enables photographers to use a range of filters, such as a circular polariser to enhance blue skies or remove reflections. For more even lighting when shooting macro subjects, a Macro Ring Lite adapter (MLA-DC1) allows Canon’s Macro Ring Lite or Twin Lite flash units from the EOS System to be used.

Offering truly advanced levels of professional control alongside unprecedented image quality, the PowerShot G1 X is the ideal camera for professional and serious photographers who demand DSLR flexibility and quality from a compact camera.