On March 2017, Canon will celebrate the 30th anniversary of the launch of the company’s EOS System, a move much criticized when it occurred, in March 1987. It took years for people to understand Canon was right. 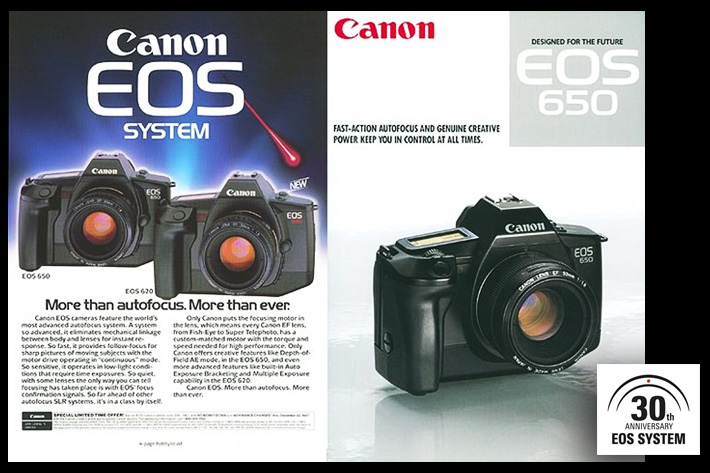 The introduction of the EOS system, 30 years ago, meant a complete cut with the past, a decision that paved the way for Canon’s modern cameras and, in the end, was copied by other Japanese camera companies.

Three decades is time enough to look back and become amazed with how much things changed. Being a Canon user since I bought my first camera, a SLR, it’s a story I feel I’ve played a part in. My first Canon was a fully manual AT-1, from 1977, with the classic FD bayonet lenses. After it, I had a series of models, another AT-1, the AE-1, an old FTb, one AV-1 for a while, a battered A-1, which was stolen, and then a T90, which I still feel I should never have bought. You see, the T90, which I still have, never got much use, because it was launched in 1986, and in 1987 Canon introduced their first autofocus SLR, the EOS 650.

EOS, which stands for “Electro Optical System,” is the name of the Greek goddess of the dawn, and one may imagine that Canon believed the company was in for the dawn of a new era. In fact, it had introduced a new lens bayonet system, EF, which made the EOS cameras the world’s first to incorporate an electronic mount system, representing a new generation of autofocus SLR cameras.

The EF had the largest mount diameter (54 mm internal) among all 35 mm SLR cameras, making it easy for Canon to design fast autofocus lenses with f/1.2 aperture. But the engineers at Canon knew more: the new mount, using only electrical contacts to supply power and instructions from the body to the lens, allowed to change the way focus was achieved.

While the standard autofocus technology used a motor in the camera body to drive the mechanical system inside the lens, Canon was able to move the motor inside the lens, without the need for any mechanical connections, and design different motors for different lenses. Autofocus became faster, less energy was needed… but users had to invest in a whole new system: camera and lenses. 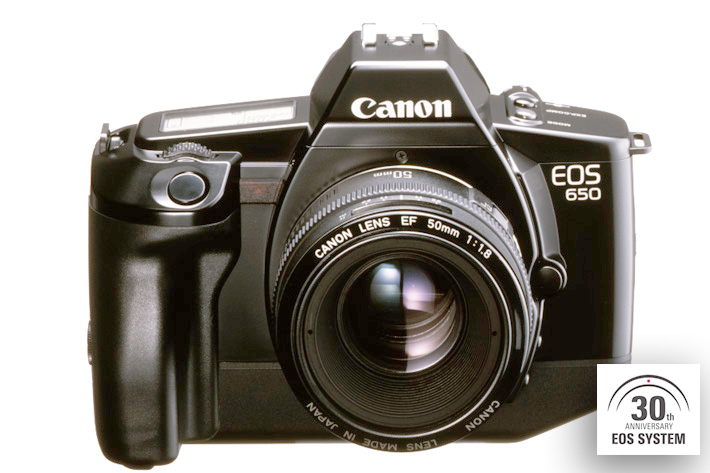 The EOS 650 SLR was launched with three lenses, the EF35-70mm f/3.5-4.5, EF35-105mm f/3.5-4.5 and EF50mm f/1.8, and Canon started to build a whole new generation of lenses and cameras for the new mount. Meanwhile, users, starting with professionals, angry with the perspective, moved away in search of other solutions. Many felt betrayed. The expected dawn was more a nightmare, even if in the same year Canon introduced another first: the first ultrasonic motor lens, the EF 300mm f/2.8L USM.

I took some time for people to understand the advantages of moving to a whole new system, without any compromises with the past. Nikon kept mechanical linkages in their cameras, but as time evolved was forced to create compatibility charts for users to know which lenses were compatible with which bodies, and the limitations involved. In the initial Canon’s EOS system all lenses work with all bodies. Only recently, with digital cameras, there are some limitations with EF-S and EF-M lenses, but those are easily understood.

In the end Canon’s decision proved to be right. So much, in fact, that other Japanese camera  makers have copied the key characteristics of the EOS mount. The initial model, EOS 650 was soon followed by the EOS 620 (May 1987) and the EOS 750 and EOS 850 in October 1988. In April 1989 the EOS 630 moved the system forward and September the same year the professional model EOS-1 was launched, along with the EOS-RT, from October. The camera was based on the EOS 630 but offered a technology that Canon had used previously on the Pellix and Pellix QL models: the mirror does not move, meaning the user has an uninterrupted view of the action.

Although I tried some of these models, it was only with the launch of the EOS 10S, in March 1990, that I felt there was no way I would go back to the FD mount. I stopped using my T90 that month, forever, because I switched to the autofocus system, amazed with the way it worked already back then. The EOS A2e, from November 1992, seduced me too, with its “focus with the eye” system that I learned to use quite well. In 2000 I bought the EOS D30 (the professional pack with a 1Gb MicroDrive from IBM), entering the digital world and a relation I keep up to this day. Throughout the years, as a journalist for different publications, I’ve tested and used Canon’s models, along with other brands,both before and after AF arrived, from Nikon or Minolta to Olympus, Pentax, Ricoh, Yashica or Contax, and many other names that have vanished from the market.

Featuring the essential components of a digital camera, the CMOS sensor, image processor and interchangeable lenses, the EOS system was developed in-house and set the foundation for a product lineup that saw increased performance as new technology was developed. As a follow up, with the essential components in mind, in September 2003, Canon took another step forward, introducing the first entry-level DLSR, the EOS Digital Rebel, ushering in a new digital era. As the EOS Digital Rebel began to garner praise for its compact, lightweight design, user-friendliness and affordable price-point, Canon achieved an overwhelming portion of the interchangeable-lens camera market that year, taking the No.1 share, which it has held for 13 consecutive years through 2015. Thanks to the long-term support from Canon customers, in November 2015, cumulative production of EOS-series cameras reached 80 million units, and in August 2016, the total number of EF lenses produced surpassed the 120 million-unit mark.

Since its debut in 1987, the EOS System has consistently aimed to expand the boundaries of photographic expression, and with Canon’s optical technology at its core, the company continues to refine its imaging technology and strengthen and expand the EOS System. In 2008, the company released the EOS 5D Mark II, the world’s first digital SLR camera equipped with a Full HD video function, helping to facilitate the widespread adoption of digital SLR cameras as a tool for capturing video, and in 2012, that video technology was transformed for the Business-to-Business sector in the form of the Cinema EOS System, introduced to the world in Hollywood, California. Now, the EOS System, including the Cinema EOS System, comprises 24 models with a selection of 97 EF lens models. With this rich product lineup, the EOS System meets the various needs of different users.

On the year of its 30th anniversary, Canon promises that it will continue to refine its diverse imaging technologies based on its core optical technology, combining still-image, video and network capabilities to expand and create an even stronger EOS System that meets the needs of increasingly diverse users to promote the spread of the photo and video culture. In addition, thanks to advances in imaging technology, Canon is opening up new expressive avenues, where texture, three-dimensionality and a sense of realism can be recreated in both still images and videos, to support appealing imaging experiences.