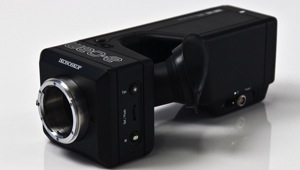 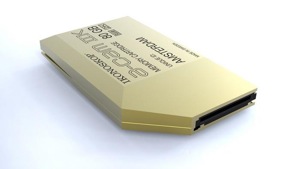 One of the most exciting launches at IBC this year came from Ikonoskop, a small company located in Sweden that has to-date catered to 16mm filmmakers and extreme sports applications. Their latest product is a digital cinema camera with a sensor size equivalent to a 16mm film frame.

The A-Cam dII is a compact, lightweight camera that captures 1920 x 1080 12-bit 4:4:4 images to a high-speed flash storage cartridge. It supports framerates from 1-60. An integrated viewfinder is tucked into the body, and orientates vertically also. The EVF includes a 1:1 zoom mode and histogram. Directors and sound crew can check audio levels, access a menu, and view footage on the embedded LCD screen on the opposing side of the camera body. The camera captures uncompressed, RAW DNG images along with two channels of 48k uncompressed audio and embedded image metadata. In addition to offering very capable specs for general filmmaking, the dII looks to be a nearly perfect configuration for tight, fast-moving extreme sports shooting. Of course, nowadays it’s nearly impossible to mention any camera without the Red One or Red Scarlet in the same breath. So how does this offering from Ikonoskop stack up to Red? In my opinion, it doesn’t. It’s not aimed at competing with Red, directly. The A-Cam DII is another animal entirely, read on for my reasons why…

1) Size.
It is an extremely compact, completely integrated design. In it’s simplest form, the dII is a tiny little brick of a camera. There are no dongles, no odd handles or hang-points jutting out of the body. Even the viewfinder has a integrated, recessed design that puts the operator’s head tucked in close to the body. This camera is begging to be shot from a helicopter or in a cramped stunt car. For an idea of just how compact the unit is, check out this photo. Sure you can probably rig a full mattebox, follow focus, external monitor and what-have-you around the camera. But I think that’s missing the point. This thing is built for speed, and the integrated viewfinder ensures that you won’t be looking at a LCD screen at arms length. The Red One weighs more and is larger. The Red Scarlet is tiny, yes, but the lack of a viewfinder will be a sticking point for some, an advantage for others. Another size consideration is the lens. The A-Cam dII ships with a 9mm f/1.5 lens and lens mount options include PL, Leica, C-mount, and IMS (Interchangeable Mount System?). Update: The dII reportedly will also allow the use of Canon and Nikon still lenses. Via the IMS mount, I suppose. Obviously the Red One compares favorably with it’s lens mount options. Scarlet will be a fixed-lens camera, however (f/2.8 zoom). Options like the C-mount are very exciting as they are quite compact in comparison to PL.

2) Price.
Listed at €6.950 (about $9,895 USD), the dII includes a 80GB storage cartridge, battery, and 9mm f/1.5 lens. In comparison, a bare Red One will set you back $17,500 USD without storage, power, or glass. The Red Scarlet is much cheaper than the aforementioned options, but consider that it is a fixed-lens camera. Some may also be wary of Scarlet’s CMOS sensor (see bullet #5 below). At under $10k USD, the A-Cam dII is nestled nicely above HD camcorders, but still well within the range of indie budgets, and with a featureset that make it useful for both filmmaking and general production.

3) Storage.
Ikonoskop has built a custom 80GB flash memory module that the unit records. Not only does it have no moving parts, the memory cartridge is rated at a whopping 240MB/second write speed. 80GB will buy you about 15 minutes of uncompressed 1080p resolution footage at 25 fps. You can of course shoot from 1fps all the way up to 60fps with the camera. Reportedly, Ikonoskop is developing an e-Sata interface reader to facilitate quickly dumping footage to disk. And about storage…Ikonoskop’s 80GB cartridges will supposedly list at under $900 USD (much less than P2 and SxS) and they are claiming will ship in late 2008 or early 2009. Red has had a $4500 high-speed 64GB RED-RAM drive listed in the store as “available in 2008” for a while now, but none have shipped that we are aware of.

4) CCD Sensor.
Red has done an amazing job with their CMOS sensor in the Red One. And I expect the forthcoming Scarlet camera to benefit from that same excellent engineering in it’s CMOS sensor. However, there are still situations where a CMOS rolling shutter is not desirable. Those that care about this will be happy to note that the A-Cam dII utilizes a CCD sensor. To be clear, in most applications a professionally implemented CMOS sensor like the kind Red has engineered are not an issue. This is still a major sticking-point for some users though, and a key difference between Red and Ikonoskop offerings. Red shooters will be quick to point out that the dII captures 1920 x 1080 HD images, while the Scarlet (specs) and Red One offer 3K and 4.5K, respectively. There is no arguing that difference, if raw resolution is what you seek. However, 1080p is perfectly suited to the vast majority of general commercial and production work, and is acceptable for feature filmmaking with an intended 35mm deliverable. Put simply, raw resolution isn’t the biggest factor on most filmmaker’s shopping list, and the dII wisely sidesteps the resolution race. Update: As commenters below have noted, 1080p is only fractionally smaller than 2K resolution.

5) Format.
Ikonoskop has chosen to capture images from the sensor in uncompressed DNG format. DNG stands for Digital Negative, and is an open (royalty-free) RAW format introduced by Adobe in 2004. The dII is firmware-upgradeable via USB, so when the new Cinema DNG standard is finalized the camera can be updated to support that option. Because DNG is not proprietary, NLE and software manufacturers should be motivated to move quickly to support the format (and needn’t work with Ikonoskop to accomplish this). And since the dII doesn’t do compression on the camera, it is passively cooled and avoids the need for an internal cooling fan, which is a potential noise source (and moving parts to service). I anticipate that the intermediate company Cineform will quickly release a DNG > Cineform converter, enabling their proven workflow on both Windows and Mac systems (yes, Cineform’s Mac codec can be used in FCP too). 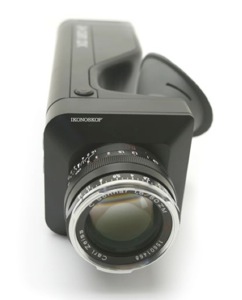 Ikonoskop is now accepting pre-orders on the A-Cam dII, requiring 10% down and stating that deposits are 99% refundable. You can learn more at www.ikonoskop.com, check out the new FAQ while you are there.. Finally, I’d like to note that my comparisons to the Red One and Red Scarlet are simply that… comparisons. This article seeks to highlight the differences between the cameras, not to trash or put down Red. I hope after reading this, you will understand why I believe there is room in the marketplace for this new “digital 16mm” option. And when filmmakers have more options to choose from, we all win. I wish the Ikonoskop team all the best as they work to ship these new cameras within their projected timeframe.

Update: Here’s a fantastic video interview with the creator of the A-Cam dII. Seeing the camera body handled really illustrates just how compact and well-designed the unit is. You can also see that this appears to be a functioning unit, the sensor is visible, the unit seems complete and well beyond the “tradeshow mockup” stage. Looks great.

Update: I’ve posted my discussion with Ikonoskop’s Daniel Jonsater about the dII. In our 30-minute interview, we cover many of the burning questions user have been asking about this new camera system. Subscribe to the free podcast to listen, or download directly here.