This article accompanies my recent chapter 9 of the PsF’s missing workflow series, which offers workarounds to use PsF from AVCHD properly in Premiere Elements 10, as well as native 1080p23.976. 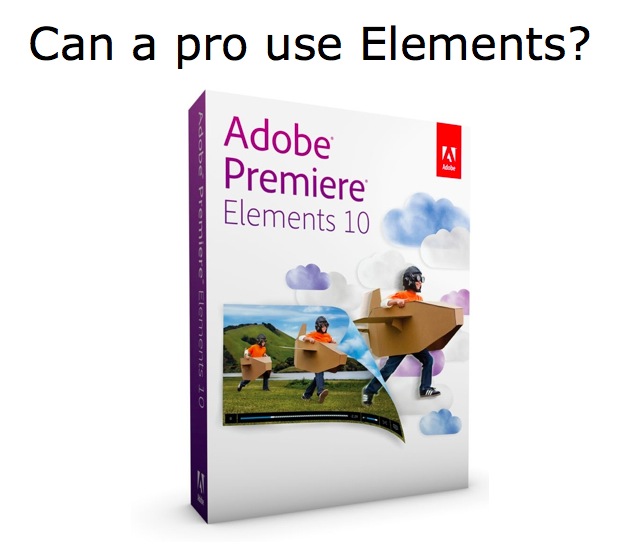 Tests and observations made for this article

The observations and tests made for this article were done using the Mac version of Adobe Premiere Elements 10. To my knowledge, all observations would be identical with the Windows version, except when noted.

Features that are surprisingly present in Premiere Elements 10

Adobe Premiere Elements 10 costs under US$100. Depending upon where and how you purchase it, it can cost substantially less than US$100. Obviously, it is a much lower priced version of Premiere than Premiere Pro CS5.5, at a fraction of the cost. I was happily surprised to see that Premiere Elements 10 includes:

On page 2 of this article…

Of course, it wouldn’t be reasonable to expect that the consumer version would include all of the features of the Pro version. If they did, then nobody would by Premiere Pro CS5.5. Here is a list (although not necessarily a complete list), so you can begin to determine whether you (as a video professional who reads ProVideo Coalition magazine) could use Premiere Elements 10 instead of Premiere Pro CS5.5 or some other pro editing application. Everything in this list is what’s missing from Premiere Elements:

According to the first definition, anyone who is paid to edit video is a professional. But then again, many of the other definitions refer to learned professions. Some people consider someone a professional in a particular field only if s/he earned a degree or diploma in it. In some countries, people only make that distinction with professionals like medical doctors and lawyers, and are much more casual about the terms with other fields. For example, most people I know that were raised in the USA will call a person a journalist because s/he works as a journalist. Most people I know who were raised in the USA won’t say: “S/he is not a journalist” just because the person did not earn a degree or diploma in that field, although many people I know from Venezuela (for example) will do that exact thing. With video professionals (or video editors), the lines are much more blurred. Some people majored in Film Production in a technical school, while others did it as a B.A. (Bachelor of Arts) or B.S. (Bachelor of Science) in a college or university. In my case, I majored in TV and Radio Production at a place called Ithaca College, with a minor in “foreign” languages. I know that the ambiguity of the term “professional” extends at least two languages, and in at least one of them, the use of it varies from country to country. I have picked up some preferences abroad. For example, I prefer the metric system and use it whenever possible. However, I consider a person who excels in journalism to be a journalist whether s/he has a degree in that field or not, as I do a self taught musician like Ilan Chester, who won a Grammy in 2010. And I know that many video professionals (and professional video editors) who excel in their profession did not necessarily get a degree in this field. I’ll go back to this issue ahead in this article.

Those of us who have been involved in professional video long enough will remember that an AB roll editing system comprised of at least three professional decks (or two with pre-roll), a computerized editing controller, timecode readers on the feeder decks, a timecode generator/reader for the record deck, a sync generator, one TBC (Time Base Corrector) for each feeder, a video mixer, and scopes (a waveform monitor and a vectorscope). At that time, it was considered part of the responsibilities of the editor (or of the operator) to handle all of these things. I say “operator”, because in some situations, the editor (the one making the creative decisions) never even touched the equipment. The editor simply told the operator what s/he wanted next. Back in that era, I was involved in the design, integration, and training of those “linear” editing systems.

Today, there are people who get paid to edit video who have never used a vectorscope or waveform monitor in their software editing program, and have no idea about how to read them. I have mixed feelings about that. Back at Ithaca College in the late 1980s, we were taught the practical aspects of producing video, including scripting and budgeting. We had professional cameras (portable and studio) and we recorded and edited using 3/4” U-Matic. While I was there, there was no A/B roll editing system, but we learned how to “fake” AB when it was necessary. In the standard curriculum, we were not taught how to read a waveform monitor or vectorscope in any of our formal classes. I just called my friend Jeff Taylor from Elements Post in Connecticut (his company name is a complete coincidence, and Elements Post does not edit using Adobe Premiere Elements!) who studied with me there -and graduated the same year- to make sure my recollection was correct. As it turned out, Jeff learned it during an internship, and I learned since I had enrolled in the optional “Student Engineer” program there, where I learned how to white balance cameras manually, the old fashioned way, with a CCU (Camera Control Unit), chart, a waveform monitor, and a vectorscope. So of course, I learned what legal broadcast limits were for white level and black level, and maximum color saturation. But many people who got a degree in TV production never learned those things, and many of those may be paid nowadays to edit video. It is very likely that nowadays students at Ithaca College and other similar schools are taught how to use one of the “professional” editing programs, so it is likely that these things are now part of the curriculum, whether it be Adobe Premiere Pro, Avid Media Composer, Final Cut Pro (6, 7, or X), since all of these include scopes.

The role of a professional i/o device like the ones from AJA, Blackmagic, Matrox, or MOTU

When I first began to integrate “non-linear” video editing systems, it was with hardware from companies like DPS (Digital Processing Systems) Matrox, Truevision, and Media 100. At the beginning, it was a requirement to use this hardware for several reasons:

When the DV25 formats arrived (consumer DV, JVC’s Professional DV, Sony’s DVCAM, and Panasonic’s DVCPRO25), it was the first time editors were able to capture directly via FireWire (IEEE-1394). That extended with the HDV format, and (with certain decks) with DVCPRO50 and DVCPRO-HD. At first, a FireWire card was necessary since many computers didn’t have it onboard, but later it arrived as native. I have dedicated many articles about when and how an editing system often still requires a professional interface from a company like AJA, Blackmagic, Matrox, or MOTU, even though many systems no longer require capturing from analog or SDI videotape, or printing to tape. Some of them include absolute perfect monitoring (especially for editors who still deal with interlaced video) and acceleration (although that is using the GPU more often as time passes). In addition, Matrox offers optional H.264 acceleration for final output via its MAX. Programs like iMovie and Premiere Elements cannot use these professional input/output devices completely. Even Final Cut Pro X cannot use them completely yet, although that’s expected to change very soon. Other “professional” video software editing like Adobe Premiere Pro CS5.5, Avid Media Composer, and Final Cut Pro 7 can.

The definition of “professional” varies immensely, but even once you have defined it, the feature and technical requirements for that defined professional use also vary immensely. Only you, the “professional” editor (or her/his manager) can determine whether Premiere Elements is enough for your “professional” application. Editing is a process that requires both creativity and technical knowledge. It should be now clear that Premiere Elements is certainly more complete than the “free” iMovie from Apple, but not as strong as other software video editing programs generally called “professional”. I hope the factors and criteria I have covered in this article help you make your determination.