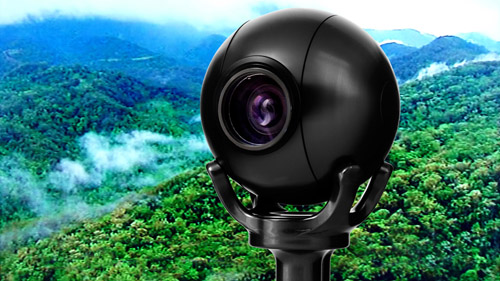 Camera Corps Q-Ball robotic camera heads are keeping watchful eyes on the latest series of ‘I’m a Celebrity…Get Me Out of Here’ from Springbrook National Park on Australia’s tropical Gold Coast. A total of six Q-Balls were chosen by international broadcast services company Gearhouse Broadcast as part of an 80-camera flyaway production system for the programme’s ninth series. Produced by ITV Studios, the programmes are being transmitted in Britain by Granada Television (weekdays) and LWT (weekends) and on TV3 in Ireland. Over 40 hours of live programming are being sourced from 24/7 content captured over several weeks of production.

“Camera Corps has provided a total of 27 point-of-view cameras including six Q-Ball heads, remote pan/tilt mounts and camera controllers”, comments Kevin Moorhouse, Gearhouse Broadcast’s Chief Operating Officer. “We first used Q-Ball itself during the June 2009 series from Costa Rica. Its robustness and ability to blend in unobtrusively with practically any background make it an ideal production tool. Besides being resistant to moisture ingress, which is vital in a rainforest environment, it has a very smooth integral tracking mechanism allowing steady follow-shots to be made with full control of lateral and vertical viewing angle as well as zoom. Q-Ball’s ability to work in infra-red is also extremely useful when the production crew are operating at night or in very dark locations.”

“We have worked with Gearhouse Broadcast on several of the ‘I’m a Celebrity’ series,” adds Camera Corps’ Director of Operations, Matt Frost, “including productions from Australia for ITV in November 2008 and for German television in January 2009. “For the latest series, we fielded a production crew headed by David Sisson, one of our most experienced operators. In addition to one silver-finished and five black-finished Q-Balls, we supplied 18 other remote heads, each holding a Panasonic 800 daylight camera paired with an under-suspended Sony FCB-EX1010 night-vision camera for IR shooting. These were mounted on Minishot remote heads operated via our multi-camera control system which can handle up to 72 cameras of different types. For the Bushtucker trials we supplied three Iconix HD-RH1 HD/SD miniature cameras, set to SD, and four Toshiba TU-63. We also supplied all the control, cables and lenses as well weatherproof covers – a very important detail in this part of Australia which is certainly no desert.”

Housed in a robust 115 mm diameter sphere machined from solid aluminium, the Camera Corps Q-Ball is a complete HD/SD dual-mode colour camera with motorised pan/tilt and zoom. It can be rotated laterally or vertically at any speed from 4 seconds to 20 minutes per revolution through an unlimited number of turns. Integral high-precision low-noise motors allow the camera to be repositioned smoothly during live shooting rather than merely between shots. Designed to allow rapid exterior or interior rigging and de-rigging, the Q-Ball weighs 1.3 kg including mounting shaft and can be operated at any angle. The integral camera incorporates a 1/3 inch 2 megapixel 16:9 CMOS sensor delivering 1080i/720p HD or 625/525 SD, both at 50 or 59.94 Hz and in 16:9 or 4:3 aspect ratio. Signal-to-noise ratio is >50 dB. Focus can be controlled manually or automatically. The Q-Ball is fully compatible with Camera Corps’ range of pan/tilt and CCU controllers. Its interface delivers up to four channels of audio embedded into the SDI feed. It operates from 9 to 18 V DC power supply. The camera heads are available pre-painted to match any required colour scheme, including jungle camouflage.

Camera Corps specialises in providing high-volume support services for reality television programmes as well as very large-scale sports events. The company has achieved a pre-eminent reputation for its ability to acquire exciting and unusual television content from exceptionally challenging environments. Its ever-growing arsenal include s high-level cranes, HD and SD motorized tracking cameras, underwater cameras, bullseye-mounted archery target cameras and fire-proofed high-temperature cameras. The Camera Corps team expands during large-scale events from 10 full-time staff based at Shepperton Studios to as many as 200 specialists, including highly-skilled rock climbers able to establish camera positions in almost any location.

Accompanying 300 DPI JPEG image shows one of the six Camera Corps Q-Ball robotic heads chosen by Gearhouse Broadcast as part of an 80-camera flyaway production system for the ninth series of ‘I’m a Celebrity…Get Me Out of Here’.