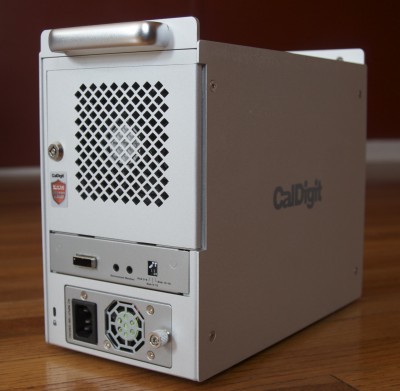 Storage. It’s always an issue. It seems that no matter how large a hard drive I buy, in a short matter of time I’ve filled it to capacity and am looking for the next solution. This is especially true for me because I tend to work with a lot of tapeless formats. One solution is a Redundant Array of Inexpensive Disks (RAID). RAID comes in a number of configurations, but most pro video RAID systems offer the benefit to users of building large capacity storage solutions that have an increase in performance and increased reliability against failure. What’s not to love? Lets start by taking a look at what comprises a RAID and where it may or may not fit into your workflow. Read on…

What is RAID?
Essentially a RAID is several disks that are addressed in one form or another as one large capacity hard drive. RAID systems can either be hardware controlled systems or a software controlled RAID (such as they type you may build internally in a Mac Pro using existing HDD slots). Now there are several types of RAID systems which you can build; for example a RAID 0 which just lumps all the drives together and treats them like one giant disk. The benefit of writing to all drives simultaneously is that this will give you the absolute fastest performance. The problem is because the data is spread out across multiple disks, when one disk goes out, well you’re out of luck. There are several other types of RAIDS that seek to provide a compromise between performance and reliability. These arrays repeat the data in one of several methods across several drives so that if one drive fails the entire array can still be rebuilt.

So what is the advantage of a hardware RAID over a software RAID? Well for one, software controlled RAIDs are often limited in capacity because you can only place so many drives in your system internally. Additionally software RAIDs can be more CPU intensive than hardware RAIDs. So with hardware RAID solutions, you are potentially looking at increased storage as well as better performance. And in the case of the current Mac OS (10.5) certain RAID types are only available with a RAID controller card (RAID5 is one common example).

Recently I had the opportunity to test drive the HDElement from CalDigit. The HDElement is a compact, sturdy 4-drive external enclosure driven by a high performance hardware controller card. CalDigit’s RAID card offers support for RAID 0, 1, 5, 6, 50, 60 and JBOD. As previously stated, a lot of these arrays are simply not supported on my Mac Pro’s software driven RAID. The controller card uses a multilane connector and is capable of daisy chaining up to 3 external arrays together. It also includes a system monitor to track temperature, RPM and other hard disk vitals.

Out Of The Box
The CalDigit external bay features the beautiful looks and styling very similar to my Mac Pro, and yes, I’m a sucker for looks. You access the enclosure from the rear using a key. The drives mount securely in removable tray. NOTE: Because of this rear-loading configuration, this enclosure would be ill-suited for a hot swappable solution where you are constantly swapping HDDs. Once the HDDs are loaded, you install the hardware RAID card into your system. I found CalDigit’s literature and installation process very easy to read and the installation was pretty straight forward. I have installed my share of RAIDs and believe me some of them are very complex. I did find fitting the controller card in my Mac Pro to be a tight fit, but with a little massaging I managed to get it in. The HDElement connects to the internal card using a MiniSAS multilane connector. I love this solution, as I already have quite a few cables and running extra SATAII connectors isn’t a very neat and clean solution. I found the locking connector very secure and the fit snug.

Setup
Once everything was connected it was time to boot up. The first time I booted my Mac Pro after installing the hardware, my system completely froze and wouldn’t start. No happy Apple logo, no spinning beach ball, just the drab gray screen of death. After several tests, I determined it was in fact the CalDigit card and called their tech support dept. After a little bit of troubleshooting they deduced that it was the on board battery on the card that was causing the issue. I unplugged the battery and the system booted just fine. 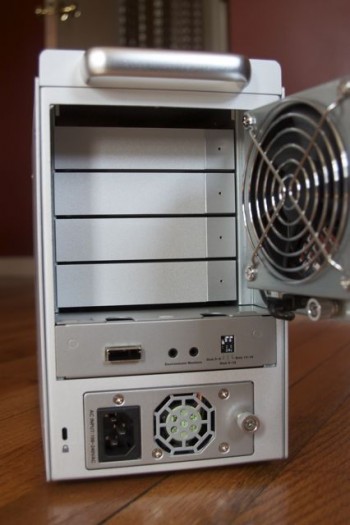 Once the system has been rebooted you can then proceed to setup your Raid. CalDigit provided good paper documentation, something sorely missing from a lot of products I have tested. Additionally they have provided a step by step installation tutorial video on their website. If you have any questions it is definitely a good place to start. Overall the setup process was very straightforward and easy. I found their Raid Shield software very intuitive and easy to use.

Performance
So now to the real question; how did the drives perform? Well first off, let me give you the numbers and then we will stack up those against real world improvements. Read on to Page 2 for our results and conclusions…

Performance
So now to the real question; how did the drives perform? Well first off, let me give you the numbers and then we will stack up those against real world improvements. I worked with several footage types, mainly RED .r3d files, XDCAM and Uncompressed 10bit. The Graph below lays out the differing HDD speeds on my system. My internal RAID is a three drive software RAID 0 on the internal controller of my Mac Pro, controlled by OS X. I should note that all RAIDS were setup as RAID 0 to test top speeds, and are not indicative of sustained speeds over the life of the RAID. 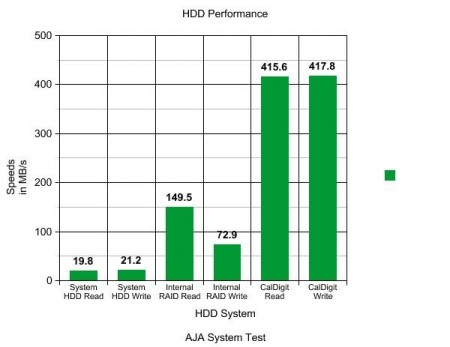 As you can see, the CalDigit numbers are significantly better! Now before you run out and buy a brand new RAID, lets quickly evaluate what these numbers mean in terms of real world performance increase.

RAID = Better Performance…right?
Your performance is mainly going to depend on what codec you are working in. If your codec’s data rate is within the ability of one of these other RAIDs then you will probably not notice an increase in performance. For example, compressing or transcoding footage will be a very marginal increase because the real bottleneck there is the CPU cycles, not the hard drive speed. So the real performance difference you’ll notice in post-production comes in way of realtime performance when working with footage on the timeline, scrubbing and editing. Let’s face it; as editors the realtime factor is very important. And the reality is that unless you are working with Uncompressed footage or another bandwidth intensive codec, you probably won’t see that much of an increase with this CalDigit unit over say an internal software RAID like the one I have configured.

For example, I was able to get perfectly acceptable RT playback on my internal RAID on both ProRes HQ files and RED .r3d files. I’m talking about multiple streams of video for the type of post-work your average Joe The Editor will be doing. Essentially a system like the CalDigit, while definitely very nice, will potentially give you a lot of overhead performance that you potentially may never see the benefit of. That said, there will be some improvements along the way such as increased reliability…simply by virtue of the fact that you are now working off of a hardware RAID. But as I soon found out, not even the best hardware RAID is entirely immune from gremlins.

Problems
I ran into a few issues while editing on this CalDigit RAID over the 6 weeks I worked on it. On three different occasions the RAID crashed, leaving me in total fear of losing my project files. Each time it crashed it would lock my system up requiring me to pull the card out of my Mac Pro and go through a series of diagnostics to get it back up and running. Sometimes it was simple and sometimes it required calling CalDigit to get things sorted out. In general I found their customer service to be pretty reliable and quick. However on one of my more drastic crashes I was transferred to technical support, who was unable to pickup the phone, requiring instead I leave my contact information for a callback. Unfortunately that return call never happened, and I finally managed to reconnect two days later. While I’m willing to give them the benefit of the doubt and accept that this is perhaps an exception to both to their product’s reliability and their technical support team performance, this does not instill a high level of confidence in me as a user.

Wrapup/Conclusions
The CalDigit is a very nice RAID. It certainly has all the bells and whistles and the performance numbers are definitely up there. However, that all comes at a cost, and the price tag definitely matches. The enclosure itself is around $2194.95 and the controller cards start at around $284.00 retail. The real question you need to ask is whether or not your current workflow demands that type of horsepower. If your answer is yes, then the CalDigit HDElement offers a substantial feature set and performance to match. If the answer is no, then perhaps the tradeoffs of a software driven RAID and associated cost savings may be just what you need. As with any area of our profession, it’s all about fitting the right tools to the right job. Happy editing!