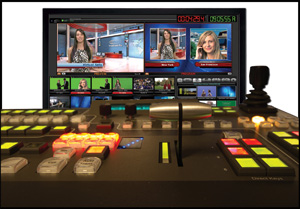 “We are very excited to bring all these new products to NAB. They advance the state of the art in control surfaces for live video creation,” said Ken Swanton, CEO. “Their superior integration of video, file-based content, data, and devices enables great live video to be created by a small team or a single operator – or in the case of voice automation, without any operator at all.”

A breakthrough in voice automated video production is the new VOX™ option, which eliminates the need for an operator for some live productions. It enables microphones to trigger Fluent™ Macros on any Granite, Mica, or Slate™ system to select camera presets, roll clips and animations, add or remove graphics, and execute PiP compositions. VOX is ideal for adding video to radio station broadcasts, as well as coverage of government and corporate meetings for television, Internet, and in-house projection.

Video Control Center 3.0’s new virtual set software with simplified chromakey setup enables up to eight cameras to have virtual backgrounds plus three key layers on top for PiP, titles, and motion backgrounds. Broadcast Pix provides several backgrounds, but any photo can be used – and a built-in image editor can crop and blur an image to simulate depth of field. The virtual sets can also integrate with Fluent-Macros for effects, such as three virtual sets in PiP boxes on an animated background.

Fluent Rapid CG 2 connects on-air graphics to databases, RSS feeds, custom action buttons, and now Daktronics scoreboard controllers and EZNews news titles. Second-generation features include dual channel for two graphics at once, as well as very fast updates including clocks by the second. Broadcast Pix will demonstrate with a Daktronics scoreboard in its NAB booth.

Granite 6000, the largest Video Control Center, features an expanded 2 M/E switcher control panel with 24 source buttons per row, as well as two banks of patented device controls to run its built-in 120-hour clip store, Harris or Chyron CG, and external devices. The panel has 143 patented PixButtons™, which show file names on the buttons. The highly redundant system has up to 22 SDI multi-definition inputs, plus seven channels of clips, animations, and graphics.

Pix Broadcast Pix is the leader in live video production systems. Its Video Control Centers™ empower operators with patented techniques that combine cameras, clips and graphics to create compelling live video. The integration of a multi-format switcher, clip store, graphics system with a Harris or Chyron CG, and device controls provides the lowest cost of ownership at a fraction of the cost of a conventional control room to buy, staff and operate. Systems range from compact systems controlled by a touch-screen or voice-automation to sophisticated 2 M/E control panels. Customers include leading broadcast, corporate, education, religious, government, webcast, entertainment and mobile studios in more than 100 countries. Learn more at www.broadcastpix.com.