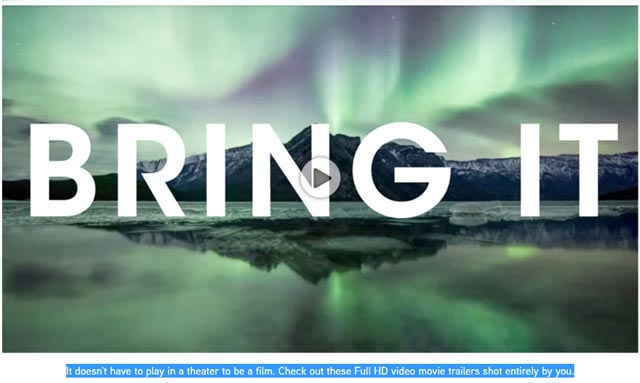 Canon USA announced recently their new campaign, “Bring It”, designed to enlighten consumers to a new perspective of telling better stories with higher quality images and video. The campaign, scheduled to roll out this month, features Canon's line of EOS digital SLR cameras and lenses with a rallying cry for everyone to bring their best images and videos to be shared on the Canon “Bring It” microsite.

Even the best cinematographers and videographers started somewhere, so campaigns like these, that hardly existed years ago, should be taken seriously by people interested in either video or photography, as a way to showcase their work to the world. In the case of video, it is obvious why Canon wants to promote it: this trend for video using DSLRs started only a few years ago, in 2008, somehow surprisingly, due to Canon's launch of the EOS 5D Mark II, and more and more people these days make or want to make videos. Now, the opening phrase on the Bring It website says it all: “It doesn't have to play in a theater to be a film. Check out these Full HD video movie trailers shot entirely by you.”

Consumers are invited to participate in the campaign by using the hashtag #BringIt every time they upload their creative HD videos and still images created using Canon cameras and lenses on social media sites, such as Facebook, Twitter, and YouTube. These images and videos may be selected and featured on the Canon microsite beginning in July. The microsite also features behind-the-scenes stories about the inspiration for each contribution, information on the products and methods used, interactive content about Canon products, and educational tools to help inspire and guide consumers.

Canon believes that consumers should not settle for good enough, when they can have great. The new 'Bring It' campaign asks the masses to bring their talent, bring everything they have to the art of creating inspiring still and video images.

Through a series of TV, in-cinema and digital spots, “Bring It” pays homage to Canon's past and future as a leader in digital imaging technology, including scenes from the recent film Need for Speed, as well as personal home videos conveying the impact Canon has had from Hollywood to the general public.

“We want this new ad campaign to inspire everyone who is passionate about photography to show us the talents they possess,” said Yuichi Ishizuka, president and COO, Canon U.S.A. “The idea behind 'Bring It' is to encourage people to strive to not only take better pictures and videos, but to take their cameras wherever they go, allowing them to tell their unique visual stories -stories that will stand out from the crowd and last a lifetime.”