Do you imagine yourself spending all day at work using a VR headset? Few people do and now monitors using Brelyon technology promise to give us a virtual desktop for a more immersive experience, headset-less. 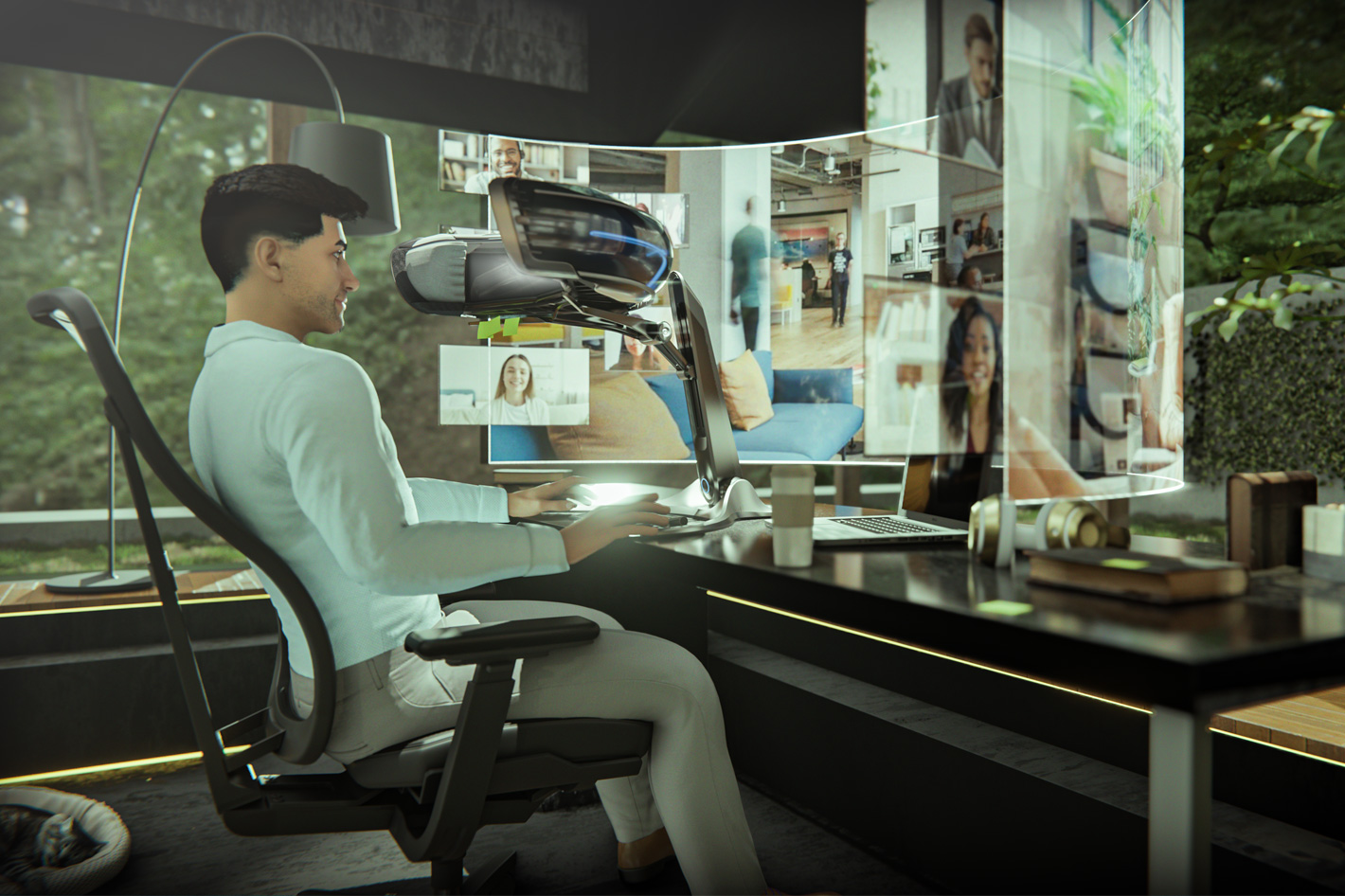 A future with everyone wearing a VR headset may only exist in Mark Zuckerberg’s mind – and investors may well cut the nightmare short – but a future where VR headsets, used for some situations, coexist with monitors is becoming a reality, and solutions like Brelyon’s patented Ultra Reality technology may well be the “bridge” between conventional monitors and a tridimensional view of the world.

Brelyon’s patented Ultra Reality technology uses computational wavefront engineering to create a massive field of view (FoV) with true optical depth, generating an immersive panoramic virtual screen that engulfs the viewer without the need for a headset, according to the company. The MIT spin-off pioneering a new category of ultra-immersive display technologies,  debuted the Ultra Reality product line at CES 2022.

Introduced as the world’s first headset-free virtual monitor built upon years of optics R&D at MIT, Ultra Reality leverages a new kind of optical technology for monocular depth invented by the Brelyon team and previewed at  TEDx. Combining the latest technical advances in novel physics and computational optics with the company’s patented superconic light-field expansion technologies, Ultra Reality offers a massive 120-inch plus curved display that provides panoramic, cinema-scale virtual images with meters of true optical depth that pans across both eyes, all in a small desktop footprint. No Meta Quest Pro headset beats that, I dare say. 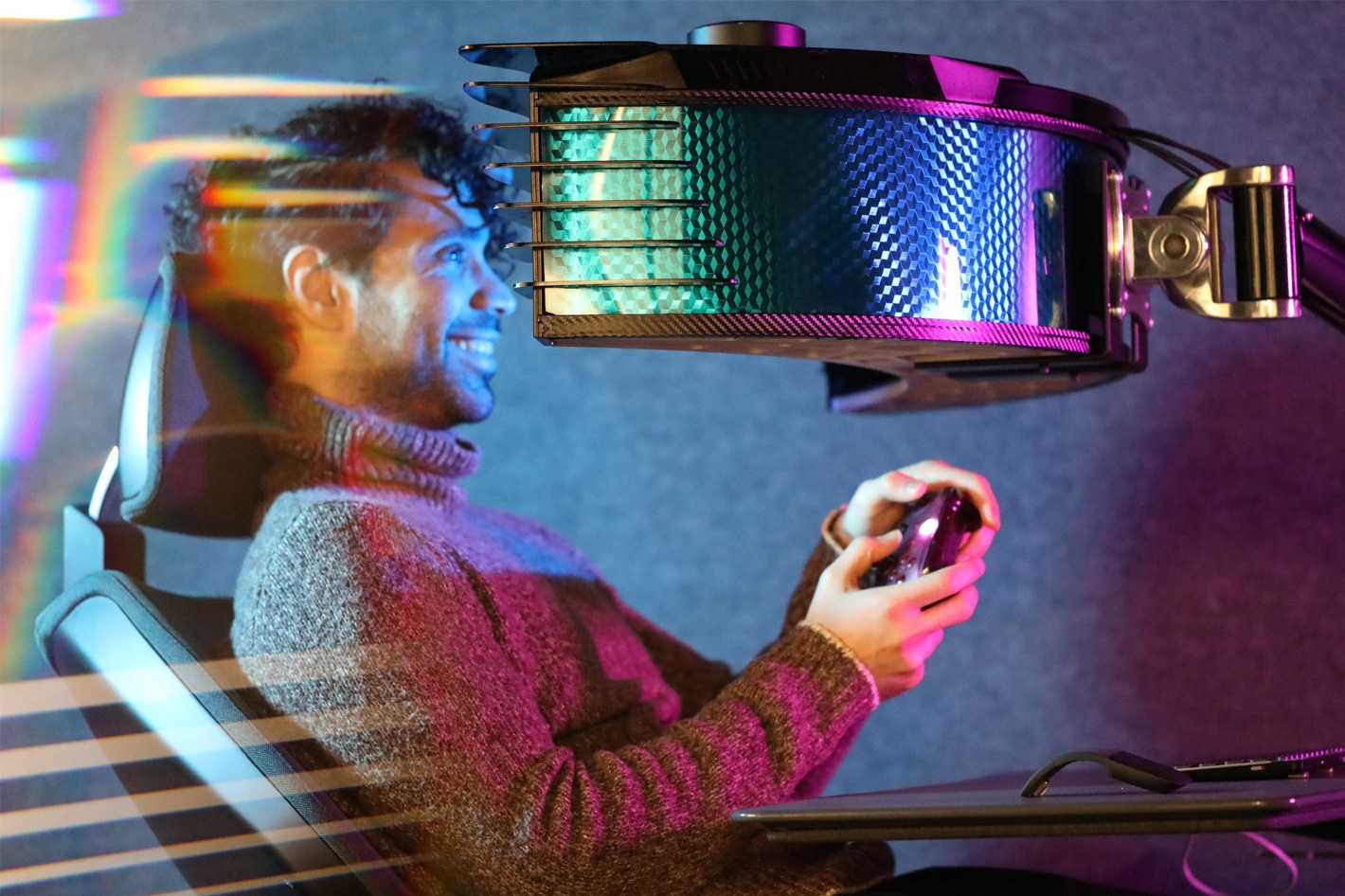 A new category of immersive displays

“With Ultra Reality, Brelyon is pioneering a new category of immersive displays to bring gaming, e-sports, metaverse experiences and beyond to the desktop,” said Dr. Barmak Heshmat, founder and CEO of Brelyon. “Control on monocular depth has long been the missing ingredient for AR/VR and 3D TVs — that’s because most current 3D displays simulate depth using bulky stereoscopic headsets or glasses that tricks your eyes into believing they see a 3D image. Brelyon has invented a new kind of optical technology for Ultra Reality that solves the problem of monocular depth, ushering in a new era of holodeck-like immersive 2D and 3D displays that are set to replace the traditional desktop monitor.”

Unlike conventional stereoscopic displays, Brelyon uses its monocular depth modulation capabilities to provide what the company states is a visual experience that alleviates eye fatigue and image artifacts for the user. According to the company, Ultra Reality eliminates the traditional bottlenecks for user and industry adoption by providing: immersion without isolation, support for legacy content, and massive virtual screen real estate without taking up desk space.

During CES Brelyon provided demonstrations of the Ultra Reality product line as well as its latest collaborations. The company also signed a partnership with LG for Integration with LG Display to open new markets and categories of immersive experiences. The aim is to serve the rising large-format gaming and productivity sectors with a solution that far supersedes anything the world of monitors has seen before. Brelyon will be integrating LG Display’s P-OLED technology into Ultra Reality. 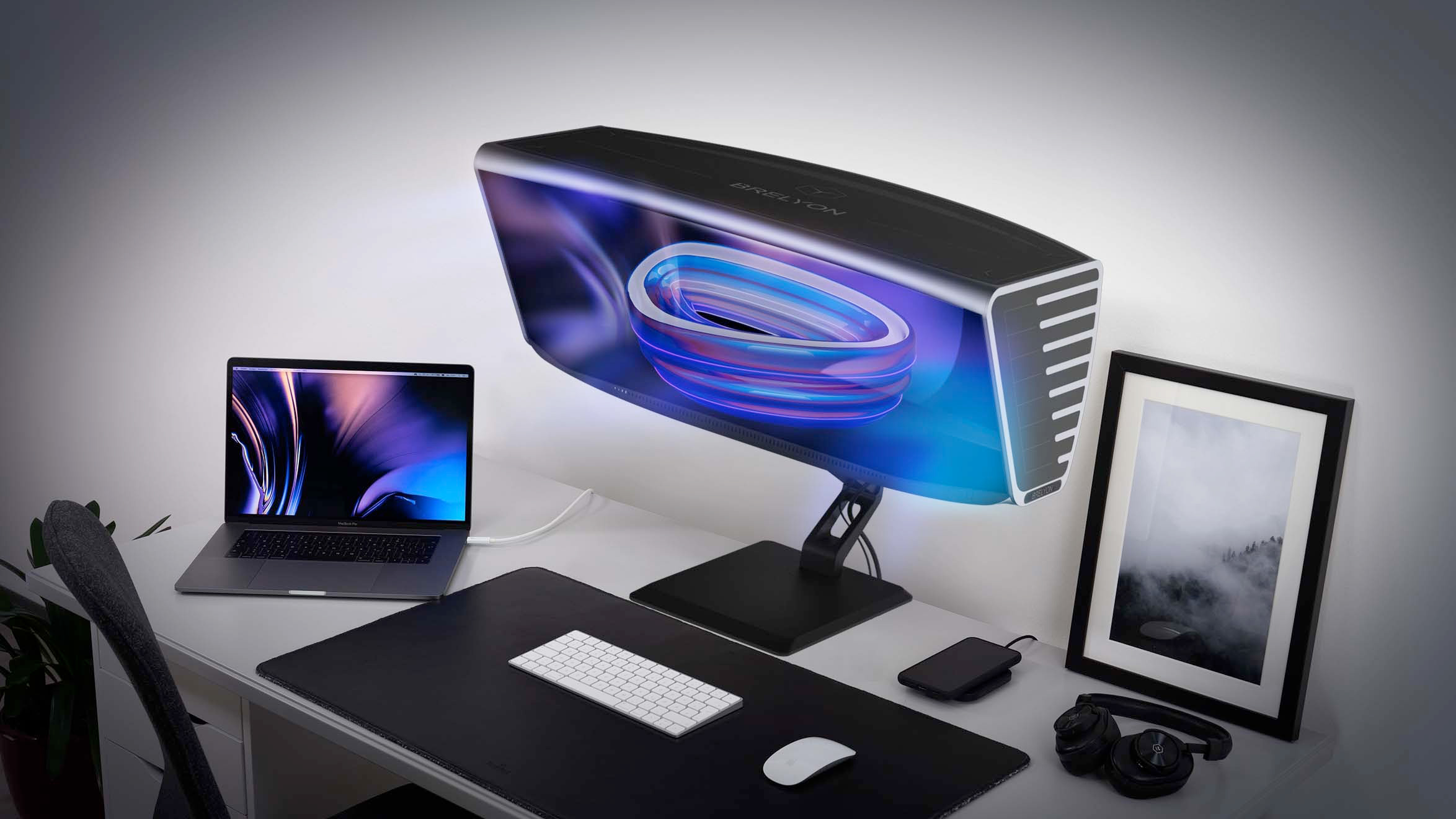 As the global leader of P-OLED technology in the display industry, LG Display has been perfecting screen experience by introducing higher performing cutting-edge displays every year. In cooperation with LG Display, Brelyon can open new markets and categories of immersive experiences.

For years, the screen industry has been betting on new modalities such as 3D displays, Augmented and Virtual Reality headsets and bigger and bigger curved monitors. Unfortunately, most have seen slow adoption as they require transformations in content, manufacturing process or consumer behavior. Brelyon has invented a new category that merges the best of the alternatives: immersion without isolation, support for legacy content, huge virtual screen real estate without taking up desk space.

Recently the company announced a strategic partnership with ZMicro, a provider of rugged computing solutions for military and aerospace applications, that will see the companies jointly develop Brelyon’s Ultra Reality rugged displays for deployed military markets. ZMicro will be the exclusive supplier of Brelyon’s technology in rugged markets. 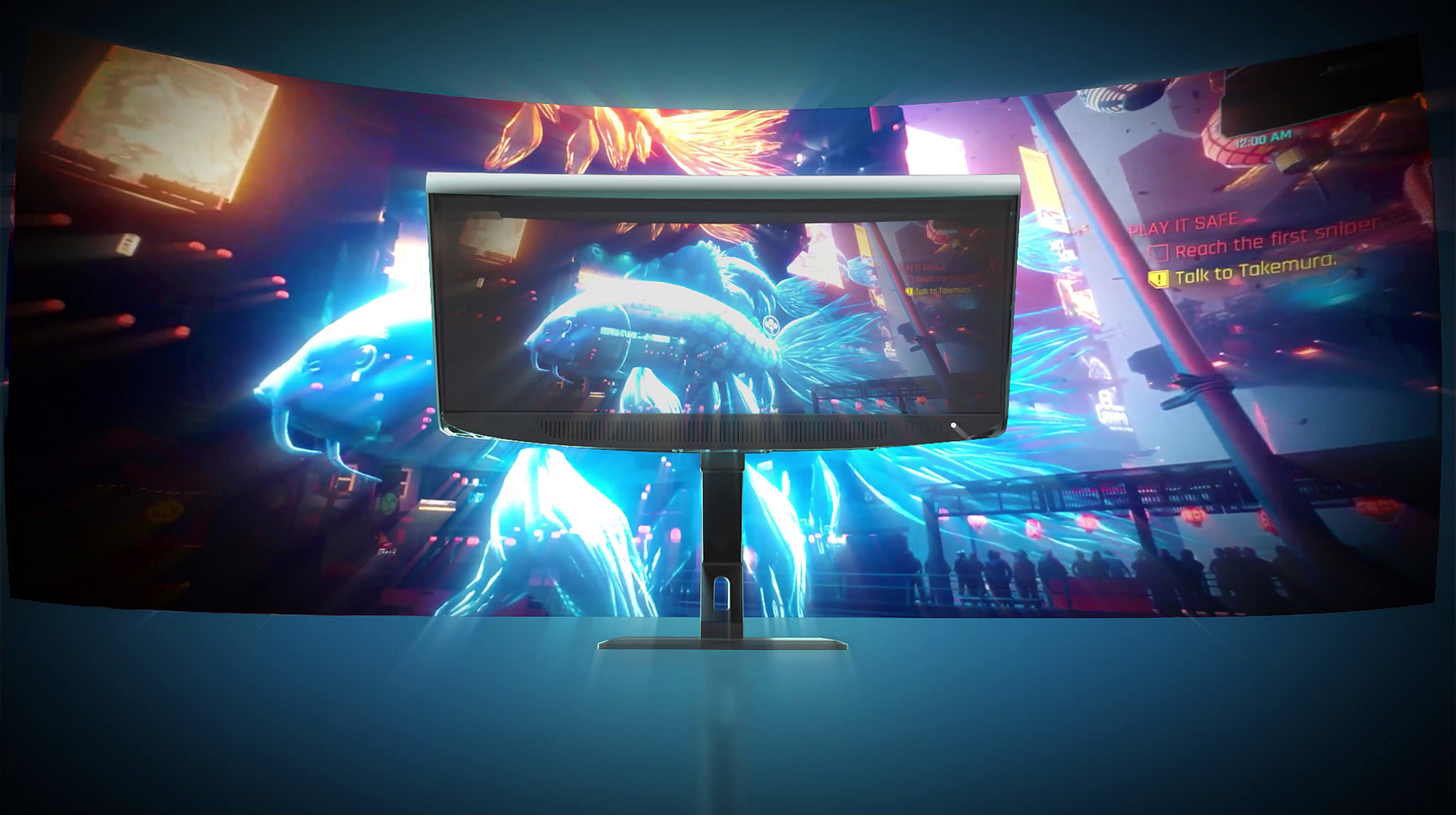 “Brelyon’s Ultra Reality technology is unlike anything we’ve seen,” said Jason Wade, President of ZMicro. “It has the potential to enable an entirely new way of computing and human-computer interface. By bringing depth and panorama to conventional displays, Brelyon is able to provide large-format and immersive visualization solutions in a small form factor. This is something that can bring huge benefits to military end-users.”

“Today’s monitors can take up a lot of space and are not immersive,” said Alok Mehta, COO of Brelyon. “Technologies like VR and AR headsets aren’t user-friendly and have poor image quality. We’re reimagining displays to take the computer display experience into the virtual world without headsets. Through our partnership with ZMicro, we will be able to bring a much richer and more productive viewer experience to end-users of deployed military applications.”

The uses of Brelyon’s Ultra Reality go beyond the military use, as you may have guessed. The immersive panoramic virtual screen that engulfs the viewer without the need for a headset, and all in a small desktop footprint facilitates a desktop metaverse experience, enabling new types of immersive applications like gaming, simulation, and virtual offices, meeting rooms, events, and collaboration spaces. That explain why Brelyon’s Ultra Reality is sparking demand from a growing roster of strategic partners worldwide that include enterprise and consumer brands from Fortune 500 and multinational companies across a range of industries for gaming, financial, productivity and industrial applications. 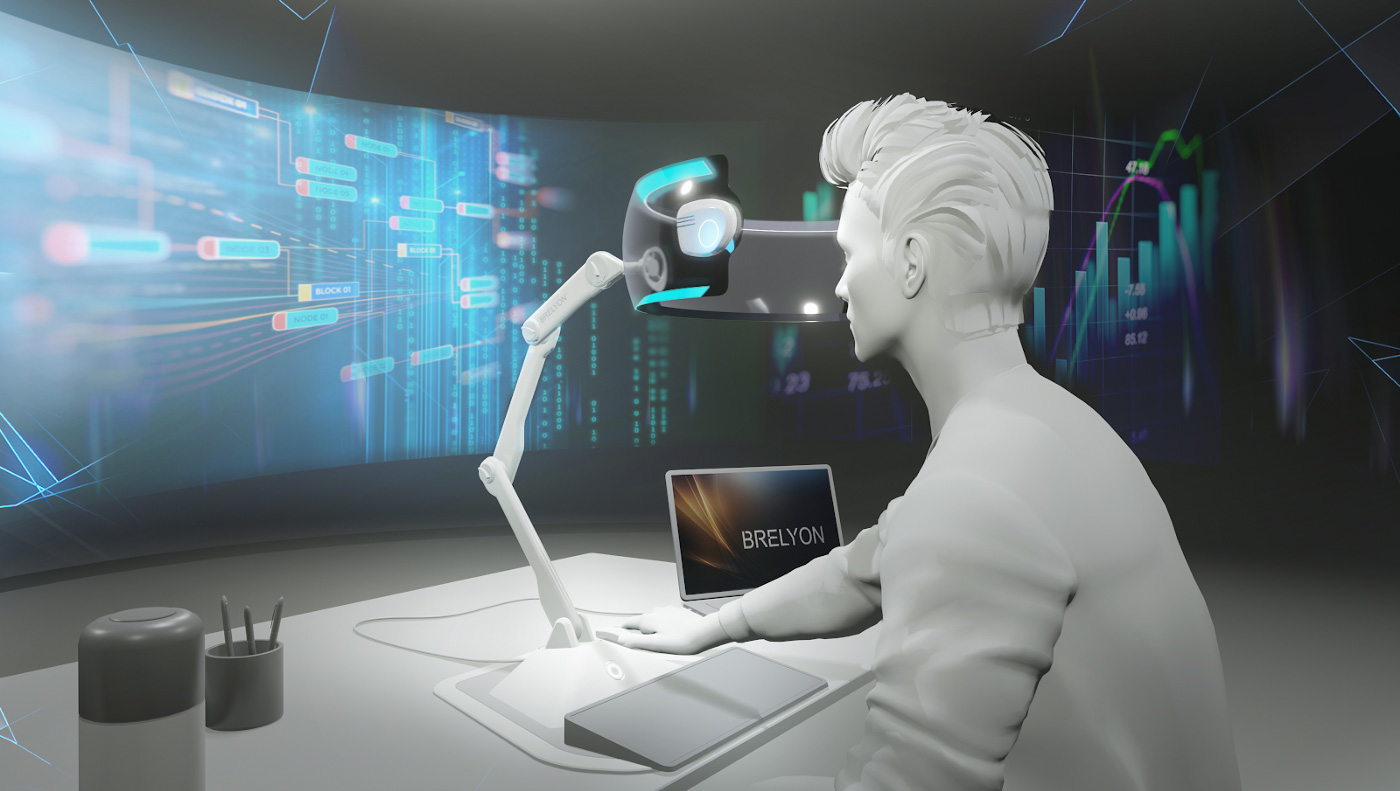 A metaverse without the need for a VR headset

Breylon is also building a metaverse, but you will not need to wear a VR headset to visit it. “Brelyon has a completely new take on metaverse and virtual worlds,” said Anshul Agarwal, Managing Director at LG Technology Ventures. “Unlike conventional wisdom that is focused on binocular 3D and holograms, Brelyon’s approach is to leverage depth to push on visual and functional performance in the virtual domain. This opens the door to visual experiences that have orders of magnitude better fidelity at significantly lower computational cost.”

“With Ultra Reality, Brelyon is introducing a new perspective on the future of work and play, while forging new inroads as an immersive portal to metaverse experiences,” said Barmak Heshmat, CEO and Founder of Brelyon, who added “the rise of GPUs and efficient graphic neural nets in computer graphics is enabling an array of computational optics in displays and making them more accessible to the mass market. This opens the possibility to provide immersive services far superior to 32″ desktop monitors and headsets today.”

With a massive 120”+ panoramic virtual image with meters of true optical depth that pans across your field of vision, all in a small footprint, the display provides a depth profile that is so natural to the eye that it relaxes the ciliary muscles of your eye and reduces your vergence stress, enabling comfortable extended use where immersion meets comfort.

The company says that Brelyon’s plug-and-play display is fully backward compatible with all 2D content. No re-rendering, no content bottlenecks. Ready to take your productivity and gaming experience to the next level. It offers a pristine image that fills up your peripheral vision, creating an awe-inspiring experience, perfect for entertainment applications. With heightened resolution and amplified brightness, Brelyon replaces multi-monitor setups in a fraction of the space, even in the most demanding enterprise applications. 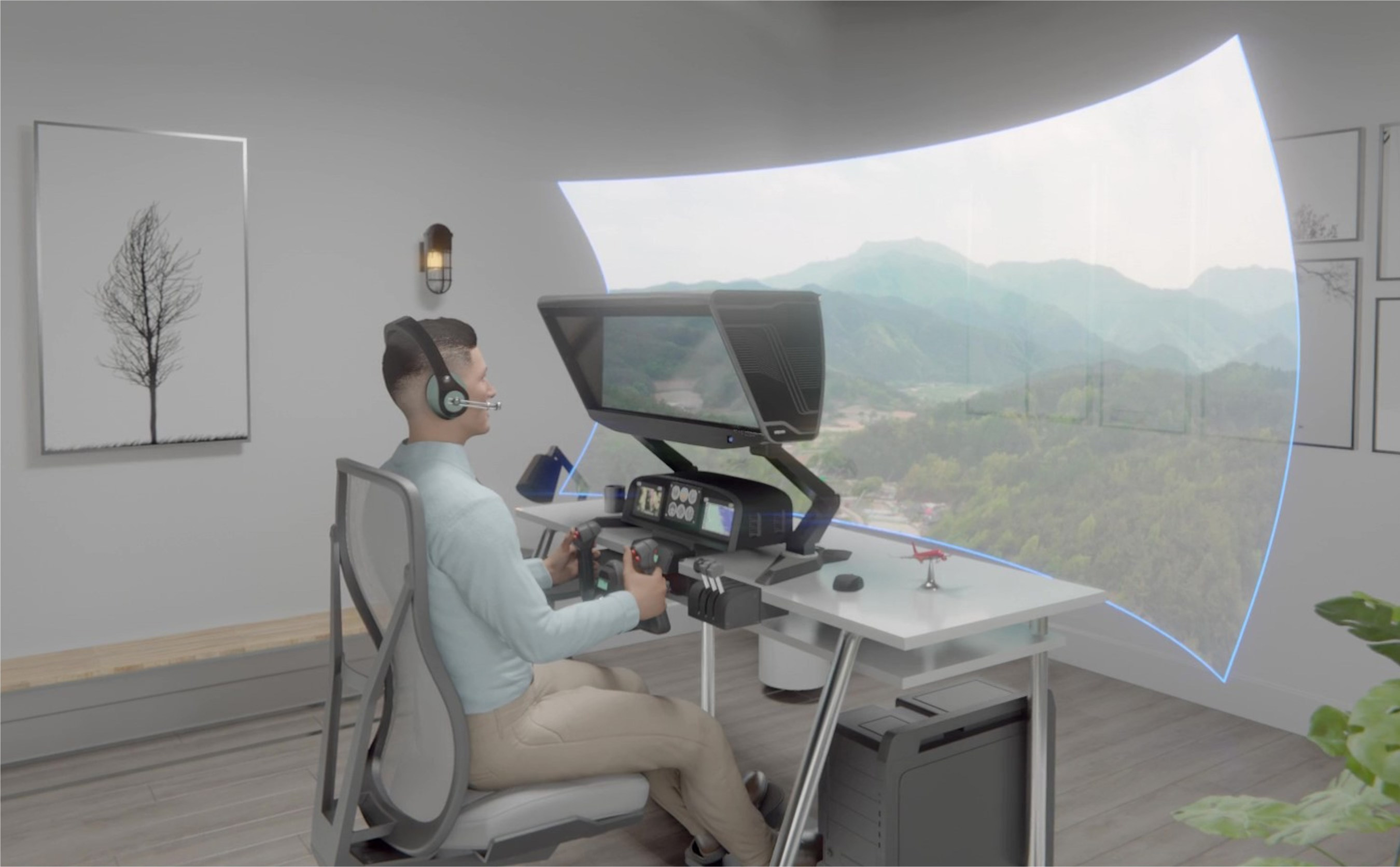 VR headsets have their place too…

One final note: solutions like the one offered by Brelyon make more sense for any office or production work than wearing a VR headset. The idea of being able to edit video on a huge screen with high-resolution, as  Brelyon’s patented Ultra Reality technology appears to allow, is appealing. Using a VR headset for productivity, meaning you block away any human contact, dealing, instead with avatars of your coworkers is an outlandish idea that makes no sense.

Those who believe the Metaverse Zuckerberg is trying to sell is a new concept, should be aware that it is nothing more than a VR version of Second Life. According to its creators, “Second Life is an online multimedia platform that allows people to create an avatar for themselves and then interact with other users and user created content within a multi player online virtual world” a description that is similar to Meta’s proposal… with the difference that Second Life was created in 2003.

Despite all the excitement Second Life created at launch, one decade later it was mostly forgotten, although it still exists. I know because I has there at the beginning and ended writing a book about Virtual Worlds. As a journalist, I also covered news events from Second Life for one of the most important newspapers in my country (it was, then), as major international news companies – from Reuters to NPR or the BBC – opened offices in Second Life. Like many other companies, Philips also had a presence in Second Life, and I was part of a user group that met regularly – with other avatars from around the world – to discuss product projects shown there in virtual form. We were paid in Amazon vouchers!

So, the new Metaverse is nothing else than an old virtual world with a VR headset added. The problem is that Mark Zuckerberg’s idea that we all must go round with a VR headset blocking the view of the outside world and using avatars to represent each of us is not only outlandish, but it may also contribute to kill VR, which has its own place as a tool in  the toolbox of many content creators. Yes, VR headsets are great for Virtual Production – see how filming crews since The Lion King have adopted VR – as they give filmmakers the immersion needed to scout virtual representations of the world— or any world, but please, leave the VR headset on the shelf when sitting down for editing the film sequences: then, monitors with Brelyon’s patented Ultra Reality technology may be the right tool for the job.